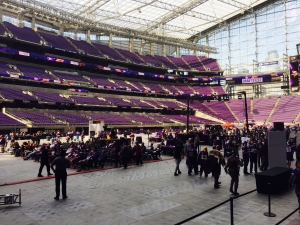 Following the Minnesota Vikings at DraftFest at U.S. Bank Stadium was a whole lot harder than it was to do so on Twitter thanks to general manager Rick Spielman, who has made 24 draft day trades over four drafts and made seven trades over the three days of the 2017 NFL Draft. Spielman was the biggest reason why the 2017 NFL Draft had the most trades ever. He didn’t change his approach from years past, and it paid off again.

Spielman had to know this year’s draft would be deep when it came to the Vikings’ needs (OL, RB, LB, S) when he moved a 2017 first-round pick (No. 14 overall) for quarterback Sam Bradford. That didn’t stop him from getting first-round talent, though.

Spielman traded up to get Dalvin Cook, who fell to No. 41 overall mostly due to off-field issues despite being the top running back on multiple analysts’ big boards. No general manager should avoid drafting a player because he has incidents of growing up. These are kids after all, and kids make mistakes. The greatest rookie of all time, Randy Moss, spent time in jail before falling to the Vikings at No. 21 overall, and 20 teams now regret passing on him. The NFL is a business, so these decisions should be purely economical. Unless you think the “red flags” would adversely affect revenue, you draft the player. That’s why Spielman moved up seven spots to draft Cook, and every team in the league will learn to regret passing on him.

The addition of Cook makes the Vikings’ backfield a triple threat, with Latavius Murray wearing down defenses with power up the middle, and Cook stretching the edge and catching passes either as a running back or wide receiver. He’s the steal of the draft in my opinion and will have a chance to prove it immediately.

The Vikings weren’t done improving the running game, though, and Spielman wasn’t done drafting talent that fell into his lap. Ohio State center Pat Elflein was widely considered a second-round talent, and Spielman moved up nine spots in the draft to get him. After signing top free agent tackles Riley Reiff and Mike Remmers to large, long contracts, Spielman added Elflein as additional depth on the interior. Elflein can also play guard, and likely will, given Joe Berger’s veteran presence at center. That’s two starters who will have an immediate impact despite not being first-round picks, which will save the Vikings money over the course of their rookie deals.

My favorite deals Spielman made went mostly unnoticed, but he flipped the Vikings’ No. 86 pick to the Chiefs for No. 104, No. 132 and No. 245. Then he traded No. 104 to the 49ers for No. 109 and No. 219. Pick No. 109 became defensive tackle Jaleel Johnson out of Iowa. He’ll serve as insurance if Shariff Floyd decides to retire due to surgery complications with his knee. Johnson is a perfect fit for the Vikings’ defense because he’s a pass-rushing tackle and lacks run-stopping ability, which the Vikings don’t need with Linval Joseph at nose tackle. That’s another potential starter drafted in the fourth round.

It was no secret the Vikings would be looking for linebacker depth, and Spielman got it in Ben Gedeon. Gedeon, out of Michigan, was the strongest and most agile linebacker at the NFL combine, and went to the Vikings at No. 120. He’s a “tackling machine,” according to Darren Wolfson, and will immediately contribute on special teams. The special teams help kept coming from Spielman, with wide receiver/kick returner Rodney Adams expected to fill the big shoes left by Cordarrelle Patterson. Adams was picked 170th overall and shed tears of joy when he received Spielman’s call.

At pick No. 180, Spielman got even more offensive line depth with Danny Isidora, who will provide competition in camp. A red zone threat followed at pick No. 201, after Spielman traded No. 199 and No. 230 to the Washington franchise for No. 201 and No. 220. Bucky Hodges, Captain America’s best friend and tight end out of Virginia tech, should contribute as a wide receiver in red zone situations because he’s six-foot-six and was the best jumping tight end at the NFL combine.

Miami wide receiver Stacy Coley could stretch the field for the Vikings and was taken at No. 219 overall. His biggest question mark is his passion for the game, though. With the very next pick, Spielman added depth to the defensive line with Ifeadi Odenigbo, who had a higher passer pressure rate than some first-rounders.

Spielman provided more training camp competition at linebacker with the addition of Elijah Lee at No. 232, who could be a starter in the NFL eventually. At No. 245, the Vikings finally got some depth at defensive back. Jack Tocho is expected to move from cornerback to safety.

Once again, Spielman moved back in the draft to acquire more picks, and once again, it paid off. Drafting three potential starters without a single first-round pick is impressive and fun. It makes me wish Major League Baseball would allow the trading of draft picks so we could see what the young Derek Falvey could do with the first overall pick.

(Spoiler alert: RHP/SS Hunter Greene will likely be the pick. Can you imagine drafting a starting pitcher who can hit for power and play shortstop? You could even bring in a reliever to face tough right-handed hitters late in the game, move Greene to shortstop, and put him back on the mound after replacing him with your utility infielder. It would also give you an extra pinch-hitter on the bench since Greene would hit for himself. Then you could move Greene back to shortstop for the rest of the game so you don’t lose his bat in the lineup. That would be so fun to watch.)