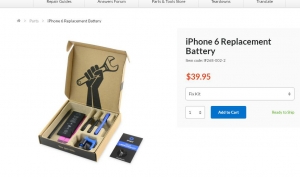 Doesn’t it always seem like your smartphone battery starts dying when you’re due for an upgrade? Same with your car, right? Once the warranty is up something goes wrong. Well, fear not. There’s a way to make your smartphone last longer than you will. A little website called iFixit.com that started as a mine for DIY tech tutorials has grown into the DIY tech preservation tool and parts shop. It’s the first shopping experience that’s nearly brought me tears of joy.

I’ve long been a user of iFixit but seldom had reason to pay them. All I needed was information. I once revived a long dead Apple iBook and managed to do some of my favorite writing on it thanks to the tutorials at iFixit. I used iFixit again to repair my dad’s theater projector. It just needed a good cleaning, and iFixit told me exactly what I needed to remove and in what order to thoroughly clean it.

Now iFixit is not only supplying DIY tech tutorials online but the tools necessary to preserve your technology. I have an Apple iPhone 6 and just blew off Verizon after a dozen years as a customer. I got a month’s worth of Straight Talk and figured I’d deal with it on a month-to-month basis for the first time. Verizon did its best to retain my loyalty by lowering my bill to $55 per month for 5 GB of 4G LTE data and unlimited talk and text. Straight Talk is $45 per month for 5 GB of 4G LTE data and includes unlimited talk, text, and data, albeit at slower speeds after 5 GB. Straight Talk also doesn’t allow tethering, which means you can’t get on the web with your laptop using your phone as a wifi hotspot. I did that a lot with Verizon, and apparently it does a number on your battery’s life. Now there’s no reason to worry.

I simply started by checking prices for iPhone 6 batteries on Ebay. Everything was under $10, so I was immediately excited. But then I Googled “does iFixit have tutorials for replacing an iPhone 6 battery,” and then I was nearly moved to tears and raised a fist in the air – just like the iFixit logo, minus the wrench.

It was the most beautiful catalog photo and product I had ever seen. Sears has nothing on iFixit. And the transaction was most enjoyable because the order form uses Doc Brown’s address in Back to the Future as an example. The only thing that could have been better about the transaction is if the billing address example was Marty McFly’s address in Hill Valley.

This little box with the big fist is delivered to your door and includes everything you need to replace your iPhone battery for $45 after shipping. You might remember I told you the cost of a replacement iPhone 6 battery was under $10, but the tools necessary to replace the battery are invaluable and most certainly worth $35. Then, when your battery goes bad again in two years, you can replace it for less than $10 rather than spend $750 for the trendiest phone that’s exactly like the last one, and the one before that.

iFixit is changing the game with this product offering. I suggest you take advantage of it. You can find parts, tools and tutorials for Android devices, Apple computers, iPads, iPods, Amazon Kindle, GoPro cameras and game consoles. Don’t let a corporation control your pocketbook. In fact, grab the nearest tool and put a fist in the air to let them know your dollars will be awarded to those who allow DIYers like us to take advantage of our willingness to do the work. Take back your right to repair.

Editor's Note: This article has not been sponsored by iFixit. An update follows.

My iPhone 6 battery replacement kit arrived in a reasonably-sized box with all the necessary tools to complete the battery replacement, but some scary information was also included. A card inside the box said my state (Minnesota) is considering "Right to Repair" legislation. I was scared because at first I figured corporate lobbyists had convinced crooked politicians to make sure we can't repair our devices. Then I wondered why we as consumers would need to pass legislation to protect our right to repair. We paid for the product. What we do with it after paying for it is our prerogative and ours alone. But, of course, corporations would love to force us consumers to buy one of their new devices every two years or so. I can understand a corporation voiding a warranty for opening a device. Apple is famous for this. There was a warning on my old Mac Pro about opening the case. I proceeded to open it anyways and add a 1 TB hard drive.

Now, back to the task at hand, which is replacing my iPhone 6 battery. I had to let my battery's charge get below 25 percent in order to start working on it because a fully charged battery is more likely to catch fire when punctured. The folks at iFixit made this very clear, and since there was no tutorial included in the box and I only had access to the iFixit website through my iPhone, I took screenshots of each step of the iPhone 6 battery replacement tutorial and uploaded them to my offline laptop.

Once the battery's charge was below 25 percent, I removed the two screws at the bottom of the iPhone near the Lightning power input. In no time at all I had access to the guts of my iPhone, and with the removal of just a few screws, which I was sure to keep in separate plastic bags labeled with their correct location. The whole task would have taken less than an hour if not for one of the adhesive strips under the battery ripping. I had to buy a $10 hair dryer at Walmart and heat the back side of the iPhone directly under the battery because I didn't have an iFixit iOpener. It worked wonderfully, and the battery gave way after just a few seconds of heating.

The hardest part was applying the new adhesive strips to the knew battery, but I managed to install the replacement battery with no trouble. I followed iFixit's instructions to calibrate my new battery by using it to lower its charge below 30 percent. I then plugged my iPhone in and let it charge uninterrupted until it was fully charged. Then I did a little research into how to preserve the life of my new battery.

Business Insider provided a great guide for battery preservation, revealing that leaving your battery plugged in after it's fully charged is really bad for your battery. I and most of you probably charge your battery at night and unplug it in the morning. Don't.

The story also warns of letting your battery's charge get too low because charging from 0 percent to 100 percent puts a lot of stress on the battery. In fact, you should never charge your phone's battery to 100 percent, with the initial charge being the exception.

The revelation that rocked my world the most was that it's not bad for your phone's battery to receive partial charges throughout the day. I was under the impression that lithium-ion batteries had a lifespan consisting of a certain number of charges. That is not the case. It's actually recommended that "charging your phone when it loses 10 percent of its charge would be the best-case scenario," according to Battery University.

Editor's Note: If you purchase something at iFixit.com and enter the coupon code GOGONZOFIX you'll receive $5 off your order. This discount is brought to you by Go Gonzo Journal.

Take these steps to protect your internet privacy from spying ISPs 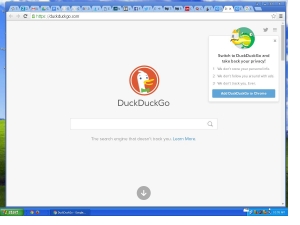 The online advertising market is worth $83 billion according to emarketer.com, surpassing the television advertising market for the first time last year, so there is plenty of reason internet service providers (ISPs) want to sell your web history. But you need not worry. There are ways to retain your online privacy.

I have recently purchased what’s called a virtual private network service (VPN), which establishes a secure connection with an endpoint somewhere else on the internet so your ISP won’t know what you’re doing. If your internet privacy is worth $3 per month, I’d highly recommend purchasing a VPN service. Here are some VPN options compared on CNET. You can even make anonymous payments with Bitcoin or Skrill if you’re nervous about paying for the service with your debit or credit card.

If you’re not willing to pay for online privacy, it’s suggested you log out of any search engine before searching, because once you log on to Google or Yahoo or Bing, a profile is created to store your web history so they can sell it to advertisers.

SaferVPN.com also suggests you use your browser’s privacy mode available through your browser’s settings. This restricts your browser from saving your web history in its cache while disabling tracking cookies.

If you’re still nervous about using search engines, use DuckDuckGo.com. It doesn’t store your personal information. And don’t forget to surf the web securely. If a website has an https version of itself, use it. Just type https:// in front of the domain name instead of http://.

Despite a 3-2 overtime loss to the Detroit Red Wings, the Minnesota Wild clinched its fifth consecutive playoff appearance on Sunday thanks to a loss by the Los Angeles Kings. The Wild have been falling like a hockey player in figure skates, losing nine of their last 11 games and allowing the Blackhawks to run away with the top seed in the Western Conference.

Minnesota has been a wildly different team since the acquisitions of giant center Martin Hanzal and right-handed forward Ryan White from Arizona. Wild general manager Chuck Fletcher added Hanzal and White to get physical with the likes of Jonathan Toews, Ryan Getzlaf, Sidney Crosby and Evgeni Malkin in the playoffs, but a scoring slump has the Wild reeling. Since the trade the Wild have managed to win just five of 17 games.

It gets worse. Jonas Brodin hasn’t scored in 32 games. Miko Koivu has just two goals in 24 games. Nino Niederreiter has scored once in 21 games. Ryan Suter has one goal in his last 29 games. Zach Parise has two goals in his last 13 games.

The only player that seems to be contributing consistently wasn’t even on the roster last year. Fletcher’s big, free agent acquisition, Eric Staal, has carried the team with 10 goals in March and has improved his +/- from -3 last year to +11 this season. But with everyone missing the net, that weight has gotten too heavy for Staal to carry. When you need an unassisted goal from a guy who hasn’t scored since 2015, things aren’t going well.

With six regular season games remaining and a seven-point lead over the Predators in the Central Division, the Wild are likely to host Nashville in the opening round of the Stanley Cup Playoffs, which might be better than if they’d won the Central Division. The St. Louis Blues have been on a familiar hot streak, winning 10 of their last 12 games under former Wild head coach Mike Yeo.

Given the deadline deal for Hanzal and White, another first-round exit in the playoffs will surely seal Fletcher’s fate. And while Bruce Boudreau has been historically mediocre in the playoffs (41-39, 1-7 in game sevens), his job should be secure. After all, it’s not his fault he’s had to rebuild a team that was never broken. He wasn’t even in the room when the trade was made.