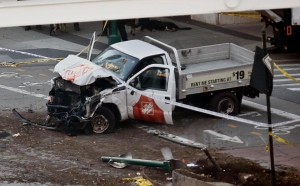 At least eight people have been killed in a terrorist attack in New York City. Alleged terrorist, Sayfullo Habibullaevic Saipovd, a 29 year old Uzbek-American, drove a rented Home Depot van onto a pedestrian sidewalk and drove for several blocks hitting dozens. Sayfullo then T-boned  the van into a school bus. After the collision, Sayfullo exited the van with a pellet gun in one hand and a paintball gun in the other. He was shortly thereafter shot and captured by NYC police. He remains in custody.

Multiple sources report Sayfullo left a handwritten note at the scene of the crime, written in Arabic, detailing his support of ISIS.

Terrorists attacks by vehicle are becoming more common. In 2010, Al Qaeda’s Yemeni branch published an article called, “The Ultimate Mowing Machine” and told readers to use trucks to "mow down" the enemies of Allah.

“If you can kill a disbelieving American or European – especially the spiteful and filthy French – or an Australian, or a Canadian, or any other disbeliever from the disbelievers waging war, including the citizens of the countries that entered into a coalition against the Islamic State, then rely upon Allah, and kill him in any manner or way, however it may be … If you are not able to find an IED or a bullet, then single out the disbelieving American, Frenchmen are any of their allies. Smash his head with rock, or slaughter him with a knife or run over him with your car (emphasis mine) or throw him down from a high place or poison him.”

Up to and including the October 31st NYC attack, there have been almost a dozen instances of radicalized Islamic extremists using trucks or vehicles to commit terror attacks. Most of these instances involve a Lone Wolf attack and while it's true that Lone Wolf attacks are extremely difficult to predict and prevent, they can be diminished.

In Daniel Byman's “Can Lone Wolves Be Stopped?” for Lawfare (online), he writes:

“One of the most important measures involves keeping Lone Wolves lonely: the less they can interact with potential co-conspirators, and in particular with dangerous groups that give them direction and training, the less dangerous they will be. Intelligence gathering and arrests of suspected cell leaders and targeting terrorist command and control via drone strikes is thus vital.

The Islamic State’s heavy reliance on social media to publicize its message and share information with recruits is a vulnerability as well as a benefit for the group. U.S. intelligence should continue to exploit social media to identify potential group members and to disrupt their activities. Such monitoring is particularly important when seeking to identify potential Lone Wolves or those with no direct international connection, as they may be encouraged by online operatives or post their intentions online as a form of bragging and belonging.”

Byman is a foreign policy editor and professor at Georgetown U. School of Foreign Service.

Note: This is a continually developing story and will be updated as further information arises.