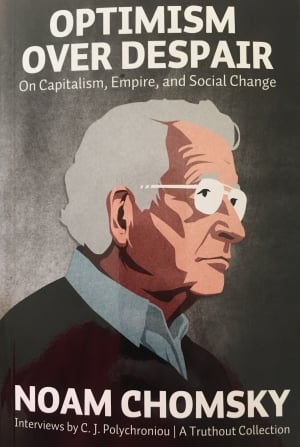 Noam Chomsky speaks better than I can write. He can recite quotes from peer-reviewed journals as if he’s reading them. The man doesn’t even need to write books anymore; he can simply dictate them. His latest collection of interviews with C.J. Polychroniou originally published in Truthout might be called Optimism over Despair: On Capitalism, Empire, and Social Change, but Chomsky only chooses to be optimistic about the state of the world despite little reason for doing so. “What choice do we have?” he asks at the end.

While the same topics and answers are repeated in some of the interviews, much of what’s repeated warrants repetition. Chomsky understandably considers nuclear arms and climate change the biggest threats to the future of the human race, and those threats are more threatening than ever before. Awarding the Nobel Peace Prize to the International Campaign to Abolish Nuclear Weapons (ICAN) reinforces the legitimacy of Chomsky’s concern.

“It is quite remarkable to see how little concern top planners show for the prospects of their own destruction--not a novelty in world affairs (those who initiated wars often ended up devastated) but now on a hugely different scale” (60).

Chomsky was speaking of nuclear weapons here, but it’s applicable to climate change as well, especially now that Environmental Protection Agency (EPA) Administrator Scott Pruitt has announced the end to a rule limiting greenhouse-gas emissions from existing power plants, proclaiming the end to the “War on Coal” and exacerbating the “War on the World.”

The business class has little concern over nuclear war because there’s little they can do about it. They have even less concern over their own destruction via man-made climate change because they assume they won’t be around for that destruction. But they will be around to spend the money they “earn” by destroying the Earth and the quality of living for everyone on it, even putting the homes of island peoples under water in a world where nationalism is closing borders to refugees.

“With considerable justice, Bangladesh’s leading climate scientist says that ‘These migrants should have the right to move to the countries from which all these greenhouse gases are coming. Millions should be able to go to the United States.’ And to the other rich countries that have grown wealthy while bringing about a new geological era, the Anthropocene, marked by radical human transformation of the environment” (121).

That really should be the punishment for America leaving the Paris Agreement, but mainstream media hasn’t done its job conveying vital information regarding climate change either, especially during the 2016 Presidential Election.

“The most important news of November 8 was barely noted, a fact of some significance in itself. On November 8, the World Meteorological Organization (WMO) delivered a report at the international conference on climate change in Morocco (COP22), which was called in order to carry forward the Paris agreement of COP21. The WMO reported that the past five years were the hottest on record. It reported rising sea levels, soon to increase as a result of the unexpectedly rapid melting of polar ice, most ominously the huge Antarctic glaciers. Already, Arctic sea ice over the past five years is 28 percent below the average of the previous twenty-nine years, not only raising sea levels but also reducing the cooling effect of polar ice reflection of solar rays, thereby accelerating the grim effects of global warming. The WMO reported further that temperatures are approaching dangerously close to the goal established by COP21, along with other dire reports and forecasts” (119-120).

“Trump’s appeal seems based largely on perceptions of loss and fear. The neoliberal assault on the world’s populations, almost always harmful to them, and often severely so, has not left the United States untouched, even though it has been somewhat more resilient than others. The majority of the populations has endured stagnation or decline while extraordinary and ostentatious wealth has accumulated in very few pockets. The formal democratic system has suffered the usual consequences of neoliberal socio-economic policies, drifting toward plutocracy.

No need to review again the grim details--for example, the stagnation of real male wages for forty years and the fact that since the last crash some 90 percent of wealth created has found its way to 1 percent of the population. Or the fact that the majority of the population--those lower on the income scale--are effectively disenfranchised in that their representatives ignore their opinions and preferences, heeding the super-rich funder and power brokers.

In part, Trump supporters--predominantly, it seems, lower-middle class, working class, less educated--are reacting to the perception, largely accurate, that they have simply been left by the wayside...Trump’s predominantly white supporters can see that their image of a white-run (and, for many, male-run) society is dissolving before their eyes. It is also worth remembering that although the United States is unusually safe and secure, it is also perhaps the most frightened country in the world, another feature of the culture with a long history” (113-14).

In short, a bunch of working-class, white males are fed up with the state of things in America and a woman in the White House is quite literally the last thing they want to see as their white man’s world slips away.

“There are other factors in Trump’s success. Comparative studies show that doctrines of white supremacy have had an even more powerful grip on American culture than in South Africa, and it’s no secret that the white population is declining. In a decade or two, whites are projected to be a minority of the work force, and not too much later, a minority of the population. The traditional conservative culture is also perceived as under attack by the successes of identity politics, regarded as the province of elites who have only contempt for the ‘hard-working, patriotic, church-going [white] Americans with real family values’ who see their familiar country as disappearing before their eyes” (124).

So is there reason for optimism given the state of American politics? Can things get better? Chomsky offers a few reasons for hope.

“There is a very interesting article by Andrew Cockburn...reviewing studies that show that an enormous amount of the money poured into political campaigns with TV ads, and the like, serves primarily to enrich the networks and the professional consultants but with little effect on voting. In contrast, face-to-face contact and direct canvassing, which are inexpensive--but require a lot of often volunteer labor--do have a measurable impact” (107).

Well at least all the money being spent on election campaigns isn’t swaying the opinion of voters. But the time politicians spend raising that money certainly limits what can be done on the people’s behalf. But are Americans fed up enough?

“The important question is: Are people motivated to do something about it? That depends on many factors, crucially including the means that they perceive to be available. It’s the task of serious activists to help develop those means and encourage people to understand that they are available” (55).

So if the American working class is willing to join together and act on their anger by getting involved in the political process they can expect change, right? Well, given the state of America’s alleged democracy, it might take more than getting out to vote. In fact, it likely requires, at the very least, the formation of an American workers’ party.

“Thirty-five years ago, political scientist Walter Dean Burnham identified ‘the total absence of a socialist or laborite mass party as an organized competitor in the electoral market’ as a primary cause of the high rate of abstention in US elections. Traditionally, the labor movement and labor-based parties have played a leading role in offering ways to ‘influence political outcomes’ within the electoral system and on the streets and shop floor. That capacity has declined significantly under neoliberal assault, which enhanced the bitter war waged against unions by the business classes throughout the postwar period...The Democrats, meanwhile, pretty much abandoned the working class” (56).

The interviews with Chomsky also touch on the historical inaccuracies and misinformed opinions shared by a majority of Americans concerning socialism and the violent history of American labor busting, on Cuba, the Wars on Terror, on Islam and American terrorism, specifically Barack Obama’s drone program, on capitalism’s incompatibility with democracy, on guns, on the minimum wage, on healthcare, on bailouts and consumerism, and on white supremacy and radical nationalism. The ultimate conclusion: “The democratic ideal, at home and abroad, is simple and straightforward: you are free to do what you want, as long as it is what we want you to do” (144).