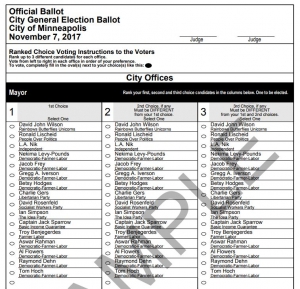 Imagine a world where the winner of an election actually earns a majority of the popular vote. Imagine a world without primaries, and political campaigns without attack ads. Imagine a world where you visit your polling place for your local elections and instead of choosing the lesser of two evils, ranking three to six candidates by your order of preference. This is the world of ranked-choice voting.

In the ranked-choice voting world, it’s less likely a candidate will give up on a voter, assuming they’ll never get their vote because a candidate likely needs both the first-choice rankings from his or her core supporters as well as some lower rankings from other voters to win an election. The result is more civil campaigning by candidates and more discussion of issues voters find important. A Rutger-Eagleton poll found that likely voters in cities using ranked-choice voting in 2013 and 2014 perceived less candidate criticism and negative campaigning and were more satisfied with the conduct of candidate campaigns.

Ranked-choice voting also eliminates the need for primary elections, which saves taxpayer dollars, but it also makes voters feel like their vote has value, which makes them more likely to vote. In Minneapolis, the number of votes cast in the 2013 municipal election were nearly double that of 2009, when ranked-choice voting was first implemented. A study by University of Missouri-St. Louis professor David Kimball and PhD candidate Joseph Anthony found that voter turnout increases by 10 percent when compared to the primary and runoff elections ranked-choice elections replace.

Most importantly, ranked-choice voting makes elections more democratic. It eliminates the lesser-of-two-evils “option” and opens elections up to third-, fourth- and fifth-party candidates, giving America’s diverse populace the diverse electorate it deserves. Even if a voter’s highest-ranked candidate loses, that voter's vote will still count for their second-, third-, fourth-, fifth- or even sixth-ranked candidate.

Passing and implementing ranked-choice voting everywhere is an easy and effective way to make our elections more democratic and ensure that those elected best represent the concerns and values of us.