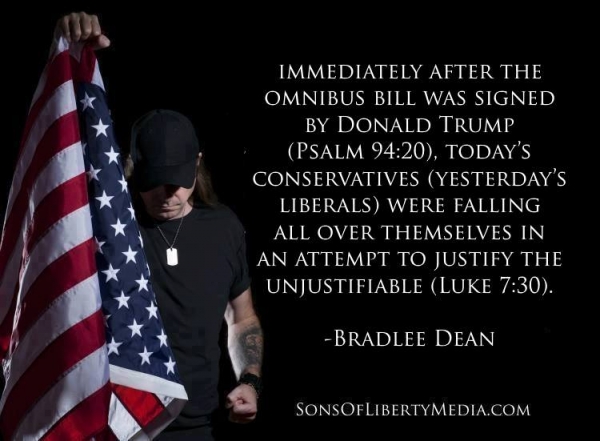 Treason-In general, it is the offense of attempting to overthrow the government of the state to which the offender owes allegiance, or of betraying the state into the hands of a foreign power. –Webster’s 1828 Dictionary

Last week, the news broke that behind the smokescreen of the March on Washington D.C., President Donald Trump did the unthinkable when he signed off on the budget-busting $1.3 trillion spending bill, which is nothing short of a complete betrayal of the American people.  The bill also finances countries that are avowed enemies of America. (Article 3 sections 3 US Constitution) HE SAID THAT IT WAS SIGNED FOR “NATIONAL SECURITY” WHILE FUNDING AVOWED ENEMIES TO AMERICA.

This in part is what we found in the bill:

After reading through the content found in this un-constitutional omnibus bill, I ask, did you vote for this?

Did these treasonous politicians receive delegated authority from “We the People” to implement that which is clearly treasonous? (Article 3, Section 3, US Constitution)

I noticed immediately after this was bill was signed by Donald Trump (Psalm 94:20), today’s conservatives (yesterday’s liberals) were falling all over themselves in an attempt to justify the unjustifiable (Luke 7:30).

One individual named Schlicther said, “I refuse to lose my mind over the omnibus fiasco, and so should you.”

Another person stated, “What Trump said behind closed doors, after signing the bill, and what he just signed are not the same.”  In other words, he didn’t really mean to sign this $1.3 trillion omnibus bill.  Yes he did, because he did it.  Remember, the man in private and the man in the office are one in the same (Luke 6:43-45).

Then we have another who wrote an article titled:

Omnibus Bill: “Trump Outsmarted The Deep States Again, The Wall is Being Built” Really? Friends you cannot make this stuff up! Shameful!  (Jeremiah 3:3)

These people are the problem. Today’s conservatives, or lack thereof, along with the corrupt politicians, at length, are attempting to justify themselves, which neither can (Luke 16:15).

They continue on their little selfish venture of playing the political games that they are willfully caught up in (Jeremiah 5:21).

They refuse to receive correction and then wonder why the politicians do not hold to their oath! (Jeremiah 2:30; Matthew 15:14) If they did, then they would not have to play the hypocrite with the guy wearing their favorite jersey on committing the act of treason.

More in this category: « Can daily Ibuprofen prevent Alzheimer’s? Film review: Ready Player One »
back to top