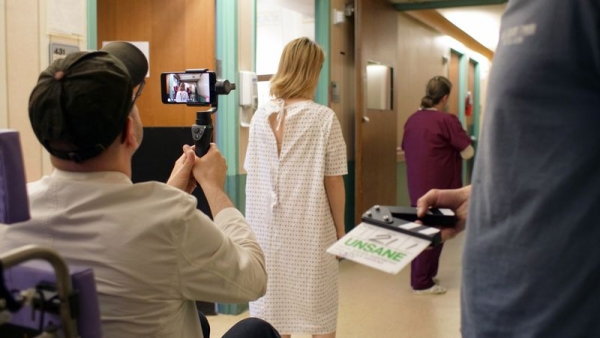 Behind the scenes on Unsane Bleeker Street Productions

Indie darling film director Steven Soderbergh officially “retired” from filmmaking in 2013 but since then has directed HBO’s Behind the Candelabra, Logan Lucky, and now the made in secret Unsane.

I mainly want to talk about Soderbergh’s process and less so review the film. This will be spoiler free for Unsane.

Soderbergh’s had a few mainstream hits like Ocean’s Eleven, Erin Brockovich and the Academy Award winning Traffic but mostly he works on under the radar indie experimental films like Out of Sight, The Limey and the Solaris remake.

He’s actually been quite prolific in the last few decades since his debut feature film Sex, Lies and Videotapes wowed audiences at the Cannes Film Festival in 1989, winning multiple awards. He’s directed 30 something features since then and produced (which means he actually worked on producing the film) or executive produced (in where he “puts up the money”) another 30 something movies.

And he continues to experiment. Sometimes he uses non professional actors, sometimes he releases a movie without a marketing campaign, he was the first mainstream director (that I’m aware of) that released a feature film on the theaters and on VOD at the same time. He is often quoted in interviews saying he’s not a storyteller and he doesn’t make movies because he feels he has a story to tell. He makes movies as an exercise in storytelling form. And form is what he plays around with in many of his films, offering unconventional ways of telling his story.

Soderbergh’s 1999 revenge film, The Limey, starring Terrence Malick comes to mind. What could have been a fairly straight forward revenge thriller turns into something quite different with an extraordinary sound design / editing technique employed during the production. The film often uses dialogue clips from previous scenes or flash forward sound clips from future scenes, juxtaposed with the current scene you are watching. This is used primarily to punctuate a scene with emphasis but it also creates a rhythmic sound structure of the film which really has to be seen and heard to fully appreciate. Anyway, my point being - no one else had ever done anything like that and overwhelming critical praise suggests it was quite effective.

And, one would assume, if a director finds something that works, why not use the technique again? Because that’s just not what Soderbergh is interested in. He used his sound juxtaposition as an exercise in form for that one film and then moved on to other experiments.

Which brings me around to Soderbergh’s latest experiment, his newly released film, Unsane, starring Claire Foy (the Queen on Netflix’s The Crown). Soderbergh decided to shoot the entire feature film on the iPhone 7. Now, I know he’s not the first director to do this (but he might be the first "big name" director to do so). There are a handful of films I can think of shot on an iPhone in recent years, 2015’s Tangerine being the most popular, and also the Oscar winning documentary, Searching for Sugar Man.

Actually, Searching for Sugar Man wasn’t entirely shot on an iPhone. Some of it was shot on 8mm film but when the director ran out of film he used iPhone app called 8mm Vintage Camera to finish portions of scenes.

I can see the appeal of shooting on an iPhone. Inexpensive. No clunky rig set-ups, no apple boxes, no grip tape, no ten crew members just to track and push your dolly. Soderbergh acted as director, director of photography and camera operator. And he was able to just follow the actors around with relative ease.

The actors loved it, of course. Without all that excess gear and crew and Soderbergh allowing scenes to go on and on the actors were fully immersed in the scenery and the story.

Claire Foy talks about the process in an interview she gave for Entertainment Weekly:

"The thing I loved about it was that Steven was in the room, he was operating , so it really felt like he was there, watching everything, being part of it, which felt really amazing. I've never had that before … We shot it in 10 days, and it meant Steven had huge amounts of freedom in where he could put the camera, what he could do with the camera, what he could try and then get rid of … He was just experimenting all the time. We shot it entirely chronologically. It just moved. It just moved a lot. And it had an energy, and a rhythm, and a momentum to it that felt fresh, and unrehearsed, and full of life.”

Soderbergh was equally in love with the iPhone shoot telling appleinsider.com:

“I have to say the positives for me really were significant and it's going to be tricky to go back to a more conventional way of shooting. The gap now between the idea and the execution of the idea is just shrinking and this means you get to try out more ideas so I wish I'd had this equipment when I was 15."

Later saying that iPhone's 4K footage looks like "velvet" and calling the device a "game changer."

The Highlights: It certainly has a gritty, voyeuristic feel to the visuals. It’s almost like you’re watching this awful thing happening in real time on security footage. So, that’s creepy. Which, at times is effect since Unsane is a thriller.

The Lowlights: A standard iPhone doesn’t allow you to play much with deep focus. You can pretty much only create a flat space look. Another problem is that the iPhone lens can’t handle close ups, sadly, it “fish eyes” the edges of the screen rounding them out. Again, sometimes this works but most of the time it just looks ridiculous. The blacks all get crushed and the lights are overly pixelated.

So when Soderbergh says the final product looks like “velvet” I seriously don’t understand what he’s talking about. Unsane, quite literally, looks like your kid brother shot a movie in the basement using his iPhone.

Velvet it is not.

That being said, sometimes the crushed blacks and pixelated lights work in favor to the story. The movie is, after all, about a woman going insane (or is it?).

Unsane is kind of review proof. It’s experimental on so many levels that some folks will just like it for what it is, and some will not. I kind of like a lot of it but I also wish Soderbergh had just used a film camera. Super 16mm would have been perfect for the tone. But using super 16 would have been a story telling choice and not a “form experiment,” which is what Soderbergh wants.

And by dopey, I don’t mean silly because Unsane, to its credit, goes out of its way to be believable and I appreciate the tone of the film.

I could also say bad acting is a problem with many horror films but that’s certainly not anything Unsane has to worry about. All of the actors are quite believable. Even when they’re screeching ridiculous lines.

When “form” isn’t getting in the way, Unsane is as effective as it tries to be. And there are lots of things I admire about the film. But “shot on the iPhone,” isn’t one of them.

More in this category: « Opinion: Trump's 'death penalty for drug dealers' plan should apply to doctors, pharmaceutical executives Flu season: A second wave might hit »
back to top