In 1968 a Louisiana hero stopped the My Lai Massacre 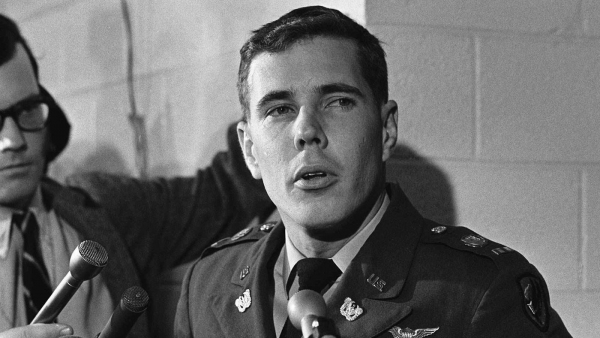 Fifty years ago this weekend, the focus of the Vietnam War dramatically changed. Many Americans were skeptical of why the war was necessary. There were scattered reports of American soldiers killing innocent civilians. But some would argue bad things can happen during wartime, and that’s the price a nation must pay. Then came My Lai.

If you are too young to remember the My Lai genocide, it is certainly a low point in U.S. military gallantry. An Army combat unit of American soldiers charged into an un-defended settlement called My Lai, and over a four hour period, systematically wiped out the village of some 500 unarmed old men, women, babies and children. The attack was supposedly to weed out Viet Cong soldiers, but none were there and no weapons were found.  It was a cold-blooded slaughter.

As the killings continued, an Army helicopter pilot named Hugh Thompson, from Lafayette, Louisiana, flew over and observed the massacre taking place below. I had the opportunity of questioning Hugh Thompson several times on my syndicated radio program. His words are as disturbing today as they were when I interviewed him years ago.

“We started noticing these large numbers of bodies everywhere,” he said, “people on the road dead, wounded. And we’re just sitting there saying, ‘God, how did this happen? What’s going on?’ And we started thinking what might have happened, but you didn’t want to accept the thought–because if you accepted it, that means your own fellow Americans, people you were there to protect, we’re doing something very evil.”

Hugh Thompson had a gunner and a crew chief on board with him, and he decided to put down his helicopter to investigate just what was happening. “I just figured it was time to do something, to not let these people get killed.”  He landed, got out of his aircraft, and confronted the American troops.

Then, he did something unique in wartime. He demanded that the U.S. soldiers back off and stop the killing. He bluntly told them that if they continued the slaughter, he and his crew would open fire directly on them. That cooled the confrontation down, and the killings stopped.

Hugh Thompson filed a full report and complaint, but he came under attack from some in the military who felt he should have said nothing. The Army initially covered up the genocide. But an investigative journalist named Seymour Hersh pieced together the horror that took place, and Hugh Thompson’s heroics became worldwide news. Many historians feel that My Lai was a turning point in the war as support continued to dwindle.

After thirty years of being ignored and scorned, the Army finally acknowledged that Hugh Thompson was, in fact, a hero.  He was given the Soldier’s Medal for heroism. My Lai is located in the center of Vietnam on the eastern coast. If you travel there today, a museum can be found in honor of Warrant Officer Hugh Thomson.

In his book, War Without Fronts: The USA in Vietnam, historian Bernd Greiner concludes that My Lai was “the most shocking episode of the Vietnam War.”  Fifty years ago, a few American soldiers dishonored their country by committing unfathomable crimes. But a young American helicopter pilot from Lafayette, Louisiana had the courage to step and demand that the carnage come to an end.

All Louisianans should be proud of Hugh Thompson. He died at 62, but remains one of the Bayou State’s very best.

More in this category: « Bad beats abound during March Madness Parkland High School has 70 cameras; footage from four has been released »
back to top