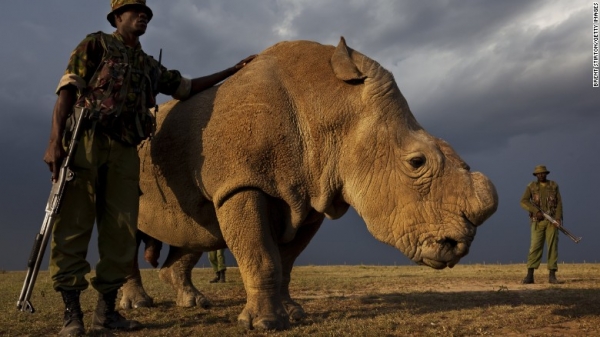 The last male white rhino has died. For a long while Sundan, the 45 year old gentle rhino lived in captivity at the Ol Pejeta Conservancy in Kenya. He, his daughter Najin and his granddaughter, Fatu are guarded 24 hours a day because they belong to a subspecies of rhinoceros on the verge of extinction.

Rhinos, you see, are targeted by poachers who believe that the horns cure various ailments. According to www.savetherhino.org:

“Rhino poaching has escalated in recent years and is being driven by the demand for rhino horn in Asian countries, particularly Vietnam. It is used in Traditional Chinese Medicine but more and more commonly is used as a status symbol to display someone’s success and wealth.”

Later when talking about the “ailments” rhino horn cures:

“According to traditional Chinese texts, such as Li Shih-chen’s 1597 medical text Pen Ts’ ao Kang Mu, the rhino horn has been used in Chinese medicine for more than 2000 years and is used to treat fever, rheumatism, gout, and other disorders. It also states that the horn could also cure snake bites, hallucinations, typhoid, headaches, carbuncles, vomiting, food poisoning, and “devil possession.” (However, it is not, as commonly believed, prescribed as an aphrodisiac).”

Whether it is true or not that rhino horns can cure ailments (but, probably not), the belief they can has brought the species to its knees. Conservationists have spent decades trying to save the white rhino but now, with the death of the last known male the future for their species is doubtful.

Dr. Steve Ngulu, the veterinarian in charge of Sunday told reporters that they collected sperm from Sudan and other long dead males but the problem is that the only two surviving female white rhinos have medical problems of their own - one is sterile and the other is not able to carry a calf to full term.

Dr. Ngulu told reporters, "The only other option that we have to have a pure northern white rhino baby is to retrieve or to do something we call ovum pick-up, collect eggs from the females."

Which brings all sorts of medical complications and doesn’t even guarantee that new born calf would be male or that it would survive as it would have to be implanted in the non sterile female and delivered mid term.

Click here to learn more about Save the rhino.

More in this category: « What to do if your child catches you in the act of sex Bad beats abound during March Madness »
back to top