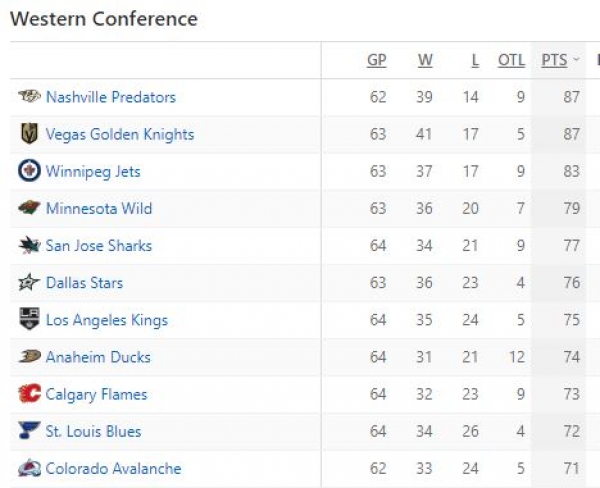 As we enter the stretch run of the National Hockey League season, more games are being broadcasted nationally and many of them are being played in playoff atmospheres due to their playoff implications. That’s especially the case for the NHL’s Western Conference, where the fourth-ranked Minnesota Wild and 11th-ranked Colorado Avalanche are separated by just eight points.

Just last night NBC Sports Network aired a doubleheader that featured a wild divisional game between the Minnesota Wild and St. Louis Blues that saw the Wild assert their dominance at home in an 8-3 win on the back of a hat trick by Eric Staal. Immediately after, the Los Angeles Kings won their second game in as many nights against the Western Conference leaders, the Vegas Golden Knights, in a preview of a possible first-round, playoff matchup. Today’s NBCSN Rivalry Night game between the Detroit Red Wings and St. Louis Blues is almost a must-win game for St. Louis as a result.

If you don’t have cable or satellite television service, watching these games and the Stanley Cup Playoffs might require you to leave the comforts of home for a nearby sports bar. While it’s not all bad to catch a game with fellow fans, visiting a sports bar two or three nights per week will take a toll on your pocketbook. Even if you drink club soda you still have to get yourself there.

The National Hockey League isn’t as popular as “the big three” sports, so basic cable networks -- the ones with the most money -- don’t tend to buy the rights to broadcast many hockey games. And even though the NBC network of channels owns the rights to the Stanley Cup Playoffs, it’s evident that NBC wants you to pay to watch hockey. It was especially evident during the 2018 Winter Olympics. Unless you had cable, satellite or a live streaming service, you couldn’t watch Olympic hockey in the State of Hockey. Not one Olympic, hockey game -- men’s or women’s -- was broadcasted on my local NBC channel in Minneapolis.

The same mostly goes for the Stanley Cup Playoffs. You might catch a game here and there on NBC using your digital antenna, but just four of the six Stanley Cup Finals games were broadcasted on basic cable last season, and just 18 of the 87 Stanley Cup Playoff games were broadcasted on NBC last year. The rest of the games were on either NBC Sports Network, CNBC or USA -- all of which require either cable, satellite or a live streaming service to view. So here are the cheapest options for cable cutters to watch playoff hockey. Hint: purchasing cable or satellite television service is not one of them.

The first knock against Xfinity’s live streaming service is that it’s only available to Xfinity customers. The second is that their 30-day, free trial is only on its basic channel lineup of 10+ channels, so NBCSN, CNBC and USA are not even included. They do waive the $10 fee for the basic package during your first month, though.

Xfinity’s customer service is as bad or worse than any other Internet service or cable providers. I actually had a customer representative sign me up for the wrong package because she did not understand that NBCSN and CNBC were different channels than NBC. I specifically stated the only channels I cared about were NBC Sports Network and CNBC, and she still signed me up for the basic package that includes neither.

Now if you’re contract is expiring with your current Internet service provider or mobile data service provider, you might consider switching to Xfinity to take advantage of a low, introductory rate on Internet or their always affordable Xfinity Mobile data plan that’s just $12 per month for one gigabyte of data. I’ve used Xfinity Mobile for three months now and have never gone over the one-gigabyte allowance because my phone connects to all the public Xfinity Wifi signals automatically. Purchasing either would give you access to Xfinity Instant TV, but there are better deals out there.

If all you want is NBC Sports Network, USA and CNBC to watch the Stanley Cup Playoffs starting April 11, Hulu is not the best answer. But it is better than paying for Xfinity’s streaming service or two years of cable or satellite service. While Hulu offers shows on demand, if the only show you intend to watch is live hockey, you can do much better than $39.99 per month. Even if you intend to watch other shows, there are cheaper options available to cable cutters.

YouTube TV is the newest streaming service on the market making waves, and at $35 per month for more than 50 channels, it’s a reasonable deal. Maybe after Google has acquired a share of the live streaming market, it will buy fewer ads and be able to lower the price. Until then, cable cutting hockey fans have cheaper options available.

Sling TV isn’t comparable to Hulu when it comes to on demand options, and it’s DVR service is an extra $10. It too offers just a seven-day, free trial, but hockey fans can save almost $15 per month going with Sling to stream NBCSN, USA and CNBC during the playoffs. You’d need to purchase the Sling Blue package of channels, which is $5 more expensive than Sling’s basic package, but you can cancel as soon as your team is eliminated. This is the best option for cable cutters who don’t have friends with cable or satellite television service on whom they can piggyback.

The cheapest option for cable cutters to watch playoff hockey is to piggyback on the cable and satellite subscriptions of family and friends. Ask for their login information and save it somewhere. As long as you’re logged in with their credentials and declare their service provider as your own, you should be able to live stream whatever channels they get that are made available to stream live by the provider.

If you like this, you might like these Genesis Communications Network talk shows: View From The Couch, Drop Your Energy Bill, The Tech Night Owl, Home Talk, Free Talk Live

More in this category: « E-cigarettes may leak toxic metals during vaping Opinion: The Post is worth seeing and reading »
back to top