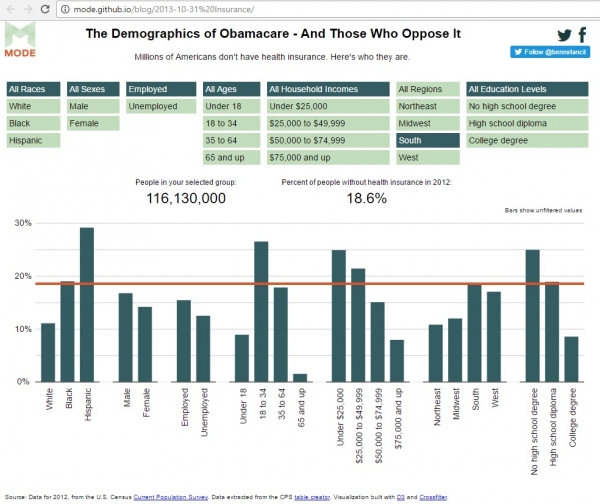 Republicans are again trying to repeal and replace Obamacare, but what they’re really doing is attempting to alter the Affordable Care Act just enough so they hold onto their jobs and fulfill a promise made by Donald Trump to repeal and replace Obamacare “one Day 1.” We are nearing Day 100, and the House Republicans can’t even agree amongst themselves let alone get enough votes in the Senate to pass their American Health Care Act.

The best thing that could have happened for Republicans with regard to the Affordable Care Act would have been to accomplish the goal announced by House Majority Leader Mitch McConnell just after Barack Obama was elected president. "The single most important thing we want to achieve is for President Obama to be a one-term president,” he said. They failed, and so will their attempt to repeal and replace Obamacare.

The problem for Republicans, and specifically Southern Republicans, is that Obamacare is working for some and would work for most of their constituents. In fact, the South had the highest rate of uninsured people in 2012 at 18.6 percent. And it’s not all Hispanics. Over 68 million of them are white.

Southerners are also the least healthy of all Americans, with 20 percent reporting fair or poor health in 2014. Southerners are also the most impoverished Americans, with 17 percent of Southerners living below the poverty level in 2014. The South also has the highest rates for diabetes, obesity and infant mortality in the nation. The South accounts for nearly as many uninsured people as the rest of America combined, and 17 percent of the uninsured fall into the coverage gap for Medicaid expansion.

Yet Southerners have taken advantage of, or actually, been disadvantaged by the Supreme Court decision to not force Medicaid expansion upon all states. Had all states been required to expand Medicaid, 7 million people would gain coverage, 4.3 million fewer people would be uninsured and states would see between $5 and $10 billion in uncompensated care savings over the next 10 years, which would offset increased state spending by between 13 and 25 percent.

Of the 19 states resisting Medicaid expansion, 14 are in the South. The states with the most people who stand to gain insurance through expansion are Florida (1.253 million), Texas (1.186 million) and Georgia (.682 million). Georgia nearly elected a Democrat to the house just a few days ago, Texas is turning blue, and two Republican incumbents lost House seats to Democrats in Florida last November, while Democratic incumbents retained all six of their seats.

In short, Southerners need Obamacare and the subsidies that come along with it. They’re just starting to realize it. Now, if America adopted a Medicare-for-all system that Bernie Sanders has proposed, maybe we could stop spending nearly $3 quadrillion on health care as a nation.

More in this category: « Senate Republicans’ refusal to confirm judges will pay off for religion Opinion: Why 4/20 2017 could be the last in America »
back to top