A local take on the Super Bowl 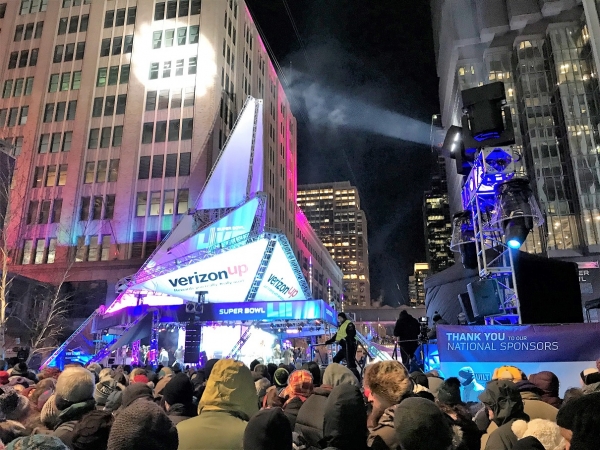 Morris Day and the Time prepare to perform at the Verizon Up stage on Nicollet Mall in Minneapolis on Monday during Super Bowl week. Anthony Varriano photo

While I’ve only been a Minnesotan for about a year, the state has been my second home since I was a kid fishing the Land of 10,000 Lakes with my dad and uncles. I’m now a Minneapolis resident and homeowner. I drive home from work on South 11th Street to avoid the backed-up Interstate 94 West at least three times per week. I attend Minnesota Timberwolves games regularly and Minnesota Twins games even more regularly. So my take on the Super Bowl is this: I’m ready for it to end and never come back.

1) You don’t get to complain about the cold

If you have tickets to the big game, you probably have enough money to invest in warm outerwear. If you refuse to do so, you still don’t have to subject yourself to the elements. I walked nearly a mile from the Super Bowl Experience at the Minneapolis Convention Center on 2nd Ave South and South 12th Street to Target Center on 1st Avenue North and North 7th Street -- without going outside. The skyway system should allow you to get from just about any downtown hotel to U.S. Bank Stadium without going outside, so you don’t get to complain about the cold. You knew this game would be played in Minneapolis in the winter, so you had ample time to prepare. The Super Bowl doesn’t sneak up on anyone, except The Dan LeBatard Show.

2) Bicycling is the best way to get around Minneapolis

Whether you’re a local or not, you don’t want to be driving around downtown Minneapolis. Army National Guard members in armored Humvees are serving as extra traffic cops and some four-lane streets are cut down to just two lanes to account for increased pedestrian traffic. Even bike lanes are being sacrificed to accommodate increased foot traffic, but at the speed of downtown traffic, bicycles will blow by cars on the crowded streets. Bicycle parking isn’t much of an issue either given the weather. I had no problem finding a place to lock up my bike just a block away from the Verizon Up stage for the free Morris Day and the Time concert on Monday night, which brings me to my next point…

Getting to the Verizon Up stage was a nightmare because of a giant, man made snow hill parked on Nicollet Mall. You couldn’t move for minutes at times because it was so packed with people. Nicollet Mall was just remodeled to better accommodate foot traffic, and the first opportunity we have to test it a sledding hill is installed instead. While streets around the stage were closed, pop-up tents selling overpriced food and drinks minimized the added area for foot traffic. So the sidewalks are basically the only means of entrance or exit to the Verizon Up stage despite the ample increase in foot traffic.

4) The Super Bowl Experience is a children’s playground

If you have children, they’ll love the Super Bowl Experience at the Minneapolis Convention Center, and at $25 per child 12 years of age or under, it’s a bargain. There are tons of games to keep them busy all day, including actual NFL combine competitions against pro football players. There’s even a mini-football field in the basement that looked to be setup for a field goal kicking contest. There’s a punt, pass and kick competition, and, of course, there’s plenty of people selling stuff.

The Super Bowl Experience might not be too attractive to adults, though. There are lounges throughout the convention center where you can play pool and get some food or a drink. There are Super Bowl rings on display as well as the Lombardi Trophy. Even some Hall of Fame busts made the trip to Minneapolis, including Vikings’ Cris Carter’s and Brett Favre’s. The most interesting thing I found at the Super Bowl Experience, though, were the tiles chronicling the game’s history. I’m betting there’s a bunch you didn’t know about football, like a touchdown used to be worth four points prior to 1898, which was less than a field goal’s five points until it was changed to four points in 1904, and then three points in 1909. A touchdown wasn’t worth six points until 1912.

I bet you didn’t know baseball’s Philadelphia Athletics and Phillies formed professional football teams in 1902. Ace pitcher Christy Mathewson played fullback for Pittsburgh, and the first World Series of pro football was a five-team tournament featuring a team made up of players from both the A’s and Phillies. I never knew the St. Paul Ideals and Duluth Eskimos existed, with Duluth having the coolest uniforms ever.

5) Radio Row is a circus

I couldn’t imagine standing around the Mall of America watching people do radio with celebrities, but plenty of fans did it with hopes of getting a picture with their favorite players. It took me about 15 minutes to realize my media pass actually granted me access to Radio Row, so upon entering I broke the only rule posted at the area: I asked Allyson Turner of The Dan LeBatard Show to autograph my headphones, and she obliged. Had I not had access, I would have gone into the office to write this immediately after my short conversation with her. Instead, I literally bumped into Drew Brees, met local, comedy legend Louie Anderson, and told Busta Rhymes how much I appreciated his music. He patted me on the shoulder with a hand the size and weight of a prize fighter’s while he said, “I appreciate you, too, man.” The highlight of my Super Bowl week was meeting Busta Rhymes. I wanted to thank Rod Carew for being such a damn fine human being, but he was the busiest person at Radio Row -- and for good reason.

So there’s a local take on the Super Bowl I’m sure my fellow Minneapolites can appreciate. Had the Vikings made the Super Bowl my take might not be so harsh, but that would be an even more biased opinion based on elation brought on by lust and desire. Do yourself a favor and heed the advice offered. We can only be “Minnesota Nice” for so long.

More in this category: « Restoring faith in the FBI The NutriMedical Report: The H3N2 pandemic, analysis and solutions »
back to top