DACA: Judicial activism - Teeing it up for Sonia Sotomayor 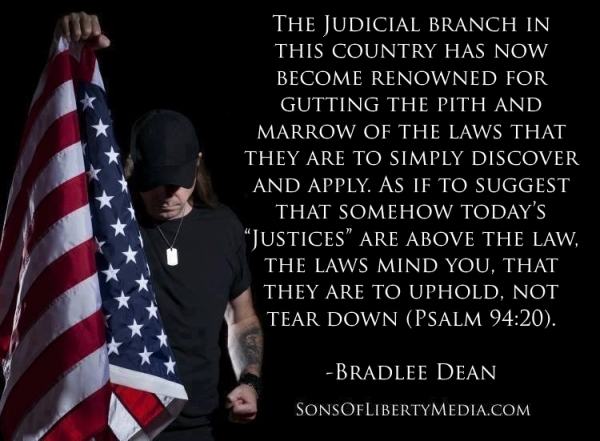 “When plunder becomes a way of life for a group of men in a society, over the course of time they create for themselves a legal system that authorizes it and a moral code that glorifies it.” ― Frédéric Bastiat

It has been said by Alexander Hamilton that “….the judiciary, from the nature of its functions, will be the least dangerous to the political rights of the Constitution…The judiciary is, beyond comparison, the weakest of the three departments of power…and the general liberty of the people can never be endangered from that quarter.”

How far backwards have Americans fallen? To see this quote in the light of what is happening today is unbelievable.  It’s unbelievable in the fact that the American people have allowed Injustices not Justices to commit lawless acts in the face of plain Constitutional law.

The Judicial branch in this country has now become renowned for gutting the pith and marrow of the laws that they are to simply discover and apply.  As if to suggest that somehow today’s “Justices” are above the law, the laws mind you, that they are to uphold, not tear down (Psalm 94:20).

William Blackstone Commentaries on the Laws of England said,

“Man, considered as a creature, must necessarily be subject to the laws of his Creator, for he is entirely a dependent being...This law of nature, being co-equal with mankind and dictated by God Himself, is of course superior in obligation to any other. It is binding over all the globe, in all countries, and at all times: no human laws are of any validity, if contrary to this; and such of them as are valid derive all their force, and all their authority, immediately, from this original.”

Furthermore, “The Judges, both of the Supreme and inferior Courts, shall hold their Offices during good Behavior…” (Article 3, Section 1, US Constitution - They are to be removed for bad behavior.  Article 2, Section 4, US Constitution)

Well then, tolerating these injustices is simply the reflection of the people of this country.

“When there is a lack of honor in government, the morals of the whole people are poisoned.” – President Herbert Hoover

DACA- The Deferred Action for Childhood Arrivals was an American immigration policy that allowed some individuals who entered the country as minors, and had either entered or remained in the country illegally, to receive a renewable two-year period of deferred action from deportation and to be eligible for work.

DACA has protected about 800,000 illegal immigrants. The program includes hundreds of thousands of college-age students.

Question:  If parents sneak their kids into Disney World and get caught, does Disney let the kids stay for FREE? Absolutely not!  But corrupt politicians do not want you to look at it this way. Then what is the issue? (Deuteronomy 28:43)

The information coming out from the CIA-controlled media about Chuck Schumer’s house being surrounded and amnesty being demanded for illegal aliens is being funded and advocated by George Soros and his paid actors and activists.  This is only a push by the media to get a demand from the American people to move on this issue of DACA.  They create the problems and come behind them as the problem solvers.

I would also like to point out that Barack Hussein Obama, five minutes before his presidential inauguration said that he wanted to “fundamentally transform America,” and for 8 years, the American people let him transgress the US Constitution from the first week to the last day of his administration.

He transgressed the Constitution over 1,180. So, when I hear supporters of Donald Trump make excuses for why he has not fulfilled his promises yet because the process may take a little more time, you are simply barking up the wrong tree. Donald Trump has the law on his side, Barack Hussein Obama did not and he still did as he pleased!

Look what happens when you go into Mexico illegally.

As you may know, Breitbart reported that Paul Ryan’s first major legislative achievement was a total and complete sell-out of the American people masquerading as an appropriations bill.

Specifically, Division F of Ryan’s omnibus bill contains no language that would prohibit the use of funds to continue the President’s unconstitutional program. Obama’s executive action, known as Deferred Action for Childhood Arrivals (DACA), has granted around 700,000 illegal aliens with work permits, as well as the ability to receive tax credits and federal entitlement programs.  A recent GAO report documented how this illegal amnesty program for alien youth is, in large part, responsible for the illegal alien minor surge on our southern border.

In 2013, Paul Ryan said that it is his job as a U.S. lawmaker is to put himself in the shoes of “the DREAMER who is waiting” and works to find legislative solutions to his or her problems.

Which then leads us to none other than Sonia Sotomayor.

Sotomayor’s time at Princeton takes up much of the book, but her account of her alma mater left a lot out, especially her involvement in left-wing politics and an explicitly anti-white club.

In fact, despite her self-description as “more as a mediator than a crusader” on racial and political issues, the archives of Princeton show that it was just the opposite.

According to The Daily Princetonian, Sotomayor even “helped shape” Princeton’s affirmative action practices and used her position as a student judge to advance a left-wing agenda.

As a sophomore, Sotomayor, then co-chairman of the Puerto Rican student group Accion Puertorriquena, filed an April 1974 complaint with the New York office of the Department of Health, Education, and Welfare (HEW) demanding that Princeton do a better job recruiting Latino administrators, faculty, and students. She delivered not one, but two letters to the president of the university calling for explicit quotas and timetables for Latino students, faculty, and administrators—and got results.

“Over the next few years, the University established new hiring and recruitment practices that gradually changed the ethnic makeup of the faculty as well as the student body,” wrote The Daily Princetonian in 2009.

Sotomayor demanded more Latinos on campus. She condemned Princeton’s administrators for showing “a total absence of regard, concern, and respect” for Latinos and accused them of organizing “an attempt—a successful attempt so far—to relegate an important cultural sector of the population to oblivion” in a letter to the editor in May 10, 1974.

Sotomayor saw an “Institutional pattern of discrimination” at Princeton. Later in a 1996 speech, she described the complaint as Princeton’s “Affirmative action failures” and the ensuing pro-racial preferences as results. “A short time later, Princeton hired its first Hispanic assistant dean of students.”

While Sotomayor’s book mentioned her involvement with the Third World Center (TWC), she left out that the group’s politics were laced with anti-American and anti-white rhetoric. Its constitution and founding documents made this clear, as does a 1976 document from the TWC. “Oppression breeds resistance,” the students wrote in protest of the decision by Princeton University to reduce the TWC’s funding. “The history of the peoples of the Third World, who have suffered from U.S. Imperialism, and of the oppressed nationalities within the United States—Afro-Americans, Puerto Ricans, Chicanos, Asians, and Native Americans, has been a history of oppression and resistance.”

The TWC’s anti-white position was demonstrated in November 1984, when the group’s board demanded that non-white students should have the right to bar whites from their meetings on campus. They also demanded minorities-only meetings with the deans. (John Hurley, “Black students, university debate closed meeting policy,” The Daily Princetonian, November 29, 1984).

The legacy of the Third World Center continued after Sotomayor graduated. In fact, future First Lady Michelle Obama would later serve on its board. Almost a decade later, the political tone of the TWC was expressed in the group’s 1984 constitution with the following language: “We define the term ‘Third World’ as those nations and people who have fallen victim to the oppression and exploitation of the world economic order,” wrote the preamble. “This definition includes the peoples of color in the United States, as they too are victims of a brutal and racist socio-economic structure perpetuated by those who still exploit such groups as Asians, Blacks, and Latinos and who still occupy the homelands of the Puerto Rican, Mexican, Native American, and Alaskan peoples.”

While careful in her book not to associate with the “Down with whitey” attitudes of many Latino students, Sotomayor wasn’t so circumspect in a speech she gave before the TWC on November 7, 1996, entitled, “The Genesis and Needs of an Ethnic Identity.”

So, I ask you Americans, "Shall the throne of iniquity have fellowship with thee?" (Psalm 94:20)

Remembering that such thrones may plead a right divine, but their claim is groundless, a fraud upon mankind and a blasphemy of heaven. God enters into no alliance with unjust authority (Romans 12:21).  God gives no sanction to unrighteous legislation.

Either your God-given rights are going to be stripped away by corrupt injustices, or you are going to impeach them, prosecute them, and replace them to ensure a future for your posterity.

Bradlee Dean is a guest contributor to GCN news. His views and opinions, if expressed, are his own and do not reflect the views and opinions of the Genesis Communication Network. Bradlee's radio program, The Sons of Liberty broadcasts live M - Sat here at GCN. This article was originally published by Sons of Liberty Media at www.sonsoflibertyradio.com - reprinted here with permission.