The grooming of Oprah Winfrey: Setting the stage 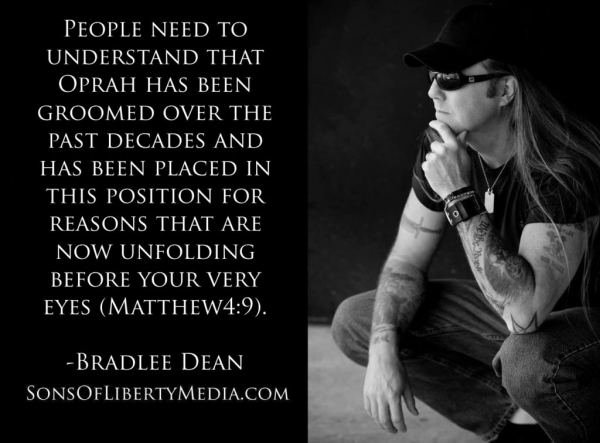 If you remember right, it was one month ago that I had stated on my radio program, “You can mark my words.  They will attempt to put Oprah Winfrey in the people's’ White House in some capacity.”

And now, we are here.

Before we begin, I need to make one quick point before going into detail. From coast to coast, from city to city, from state to state, and from first-hand experience, I do not see what the CIA-controlled media is continuously spewing out when it comes to racial issues which, for the most part, are a thing of the past.

This is an issue that is water under the bridge and does not belong to the up and comings of the last 6 decades.  Yet, there is an all-out attempt to use people of a revengeful nature, who have never experienced what they decry, in an attempt to bring about more division.

They found this is one such person, Oprah Winfrey.

First, I would like to make you aware of what President Roosevelt said back in the 1930’s.

“In Politics, nothing happens by accident, if it happens, you can bet it was planned that way.”

He is also known for saying:

“Presidents are selected, not elected.” (Jeremiah 11:9)

Let me show you how this works.  Do you not remember when Oprah Winfrey did a show with Donald Trump while planting the seeds back in 1988 concerning the possibility of a run for the presidency?

Apparently, the favor had been returned when Donald Trump was asked by Larry King, "Do you have a vice presidential candidate in mind?"

"Oprah, I love Oprah,” Trump replied.  “Oprah would always be my first choice."

People need to understand that Oprah has been groomed over the past decades and has been placed in this position for reasons that are now unfolding before your very eyes (Matthew 4:9).

Let me ask you, how do you know who Oprah Winfrey is?  Did you come to know her via the aisle at the grocery store, where her magazines are placed right before your eyes, or was it the 25 years of exposure on her television program, which aired from September 8, 1986 to May 25, 2011? Or is it Oprah’s new position as a correspondent for 60 Minutes?

If television was not the source that she was exposed to you on, maybe it was the movies?

Somehow, Oprah is now dominating the Golden Globes. Where she is being pushed as a candidate for the 2020 presidential run.

Everyone, for the most part, knows who Oprah Winfrey is.  The CIA-controlled media would have you know who she is. After all, they have labeled Oprah as the “most influential woman in the world!”

Do not forget that these are the same people that have given her the exposure needed, as well as the opportunities that have been taken advantage of by getting her into the position that she now enjoys (Mark 8:36).

Do you see where this is going? Good, let’s now talk of her possible run for the people’s White House.

Do an internet search on her run for the presidency and you will find the major networks are reporting in a supportive and favorable manner for a run in 2020.

When looking to Oprah Winfrey, that is when she is not paling around with Harvey Weinstein or George Soros, one must consider her overwhelming support for the most corrupt administration in the history of America, criminal and “race baiting” Barack Hussein Obama (Proverbs 26:8).

Remember, “Birds of a feather, flock together.”

Also, we can see that the apple does not fall too far from the tree when they all have the same divisive talking points: Oprah Winfrey, Barack Hussein Obama, Al Sharpton, Jesse Jackson, Colin Kaepernick. What is the difference?

Pay close attention to what Oprah has been spewing out over the years leading up to the present?

A correspondent for the BBC asked her if she felt that racism was the reason some Americans opposed Obama and his policies. Oprah, the one person responsible, more than any other, for Obama being president, of course said yes.

But she said much more than that. Specifically, she said this when asked if the problem of racism in America had been solved:

“Of course the problem [of racism] is not solved. ... As long as there are people who still— there’s a whole generation — I say this, you know, I said this, you know, for apartheid, South Africa, I said this for my own, you know, for my own community in the South — there are still generations of people, older people, who were born and bred and marinated in it, in that prejudice and racism, and they just have to die.”

In one quick, thoughtless breath, Oprah added another tenant to Libthink: Not only are all racists white, but they also need to “just die,” every last one of them.

It is of interest to note that the media promotes Oprah as the “voice for the people.”

Apparently, she means to be the voice for the people of color as she attempts to drive the wedge of division among all people (Acts 17:26; Matthew 12:25).

These revengeful people are in a struggle for power, what they fail to realize is, black power is just as dangerous as white power. BEWARE Americans.

Finally, let me be clear that there is nothing wrong with success.  Oprah Winfrey’s net worth of $3.2 billion, I’m sure, was hard-earned. I understand that one does not get to the top of the mountain by falling there, but the fact of the matter is that you have anti-American forces in place that support her every move and position, and those forces are aimed at “fundamentally transforming” this country (Isaiah 5:20).

Bradlee Dean is a guest contributor to GCN news. His views and opinions, if expressed, are his own and do not reflect the views and opinions of the Genesis Communication Network. Bradlee's radio program, The Sons of Liberty broadcasts live M - Sat here at GCN. This article was originally published by Sons of Liberty Media at www.sonsoflibertyradio.com - reprinted here with permission.

More in this category: « Nick Saban: The best there ever was! Gene's Technology Corner: Throttlegate and politics »
back to top