Nick Saban: The best there ever was! 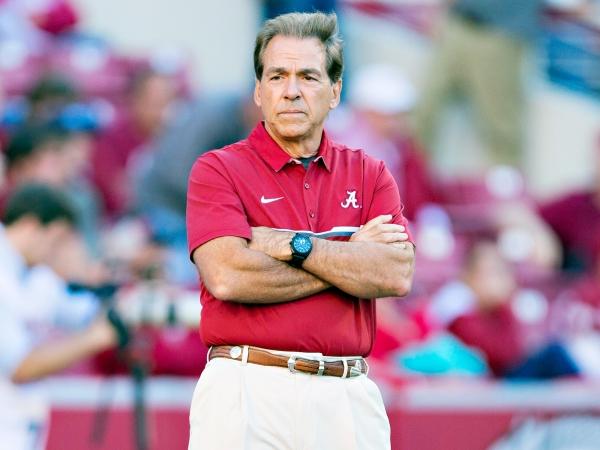 I don’t normally write a sports column, but a few words would seem appropriate after Alabama’s startling victory this past Monday night in the College Football Championship game. Simply put, love him or hate him, Alabama head coach Nick Saban is the best college coach in football today, and maybe the best college coach ever.

Now, many LSU football fans don’t want to hear this and seem to be consumed by an abhorrence of the former Tiger coach who took LSU to a national championship back in 2003. Saban left the Bayou State for what he considered greener pastures in the NFL, then returned to the Southeast Conference to take the head coaching job at Alabama. Many LSU fans consider Saban a traitor for taking on the post coaching the Tiger’s archrival.

But the proof is in the pudding, and Saban has now won six national titles, tying former Alabama coach Bear Bryant’s all time record. So what’s the reason for Saban’s success? Simply put, he is unquenchable in his approach and commitment to coaching. And losing, in Saban’s mind, is never an option. In fact, one can argue that he hates losing more than he loves winning.

His entire focus is preparation for the next game or next season. I know one of his assistant coaches here in Baton Rouge who told me he felt embarrassed taking off Christmas Day or any other holiday, knowing full well that Coach Saban would be in the football office that day at LSU. His only hobby is coaching football.

A story I heard from a close friend of Saban is an example of his insatiable commitment to coaching. Both Saban and his friend were out to dinner on a Saturday evening with their wives. About 10:30 pm, Saban’s cell phone rang. The coach excused himself from the table and stepped outside the restaurant, staying on the phone for almost 30 minutes.

Later, as they were leaving the restaurant, Saban’s friend asked him was there any problem because of long phone call. No, Saban responded. It was just one of his recruits who was calling to talk about a personal problem. Saban said he gave all his recruits his private cell number and told them he was always available to talk about football or any personal matter. Now how many coaches at major college programs will give out their personal cell phone number to a high school recruit? Simple. A coach like Nick Saban who wants to be number one.

In 2012, Alabama played LSU for the College National Championship at the Superdome in New Orleans. Our family had booked early rooms at the Hilton hotel, which was also the team hotel for LSU. Many of the players were on our same floor, and the night before the game, they were hanging out with girlfriends and cruising throughout the hotel. Nothing rambunctious, but just “hanging out” before the game. One of the players told me they had no team meetings scheduled the night before kick off.

Coach Saban had bused the Alabama team to a movie theater outside of town that was owned by my father-in-law. Saban’s office had called to arrange for a private showing of the World War II movie, “Red Tails,” about a black flying squadron who faced long odds fighting German air attacks. After the movie, Coach Saban went up on the stage and repeated word for word the movie’s rallying cry.

Last Monday night, Coach Saban’s Alabama team was behind the entire game until the last second of the overtime. They fought and fought as Saban’s intense energy and coaching momentum urged his players on. In Nick Saban’s words, “to the last minute, to the last man, we fight!”

His team did just that, and Alabama continues its reign as America’s premier college football program. These are the reasons why Coach Saban is simply the best college coach today, and perhaps the best there ever was.

“I always ask myself the question, do you like to win or do you hate to lose?" -- Nick Saban

More in this category: « What to expect from immigration reform negotiations The grooming of Oprah Winfrey: Setting the stage »
back to top