Halfway through season, the Minnesota Wild are finally healthy 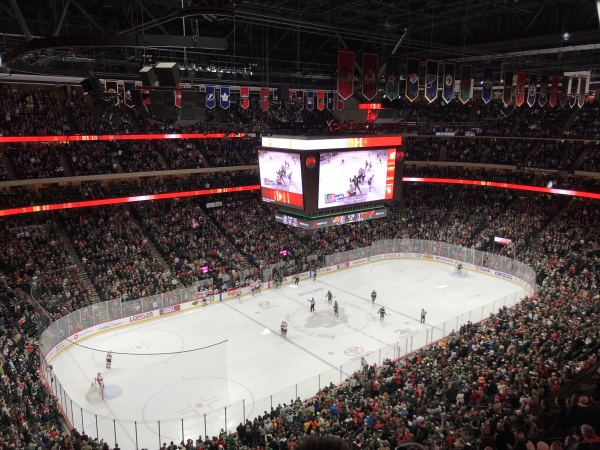 Since Zach Parise's return to the MInnesota Wild lineup, the Wild have scored 11 goals in two games. Anthony Varriano photo

The Minnesota Wild have already weathered multiple storms in their 2017-18 National Hockey League season, and NHL teams should be afraid -- very afraid -- because the Wild are finally healthy.

Minnesota opened the season playing a schedule that didn’t allow players to get their legs under them. Playing once every four or five days to start the season not only stunted the Wild’s collective rhythm on both sides of the puck, but likely contributed to injuries.

Charlie Coyle, Nino Niederreiter and Marcus Foligno all sustained injuries on Oct. 12 in Chicago. Minnesota came into its third game of the season on four days of rest, so it wasn’t as if the Wild were in rhythm or comfortable on their skates or in their schemes. The Blackhawks didn’t seem to be either, as the Wild found a way to get five goals past Corey Crawford for their first win of the year. But Minnesota lost Foligno for a game, Niederreiter for six and Coyle for 16. The Wild went on to win eight of those 16 games and earned a point in another -- weathering the storm.

Minnesota managed to survive another storm when its workhorse goaltender, Devan Dubnyk, was shut down for six games with a lower body injury sustained on Dec. 12. But backup netminder Alex Stalock preserved the Wild win over Calgary that day, making 17 saves and allowing just one goal. Stalock played well enough for the Wild to win half of their games in Dubnyk’s absence -- again, weathering the storm.

The Wild managed to remain in the Western Conference playoff picture despite losing Jared Spurgeon for nine games and Niederreiter for another five -- a testament to the improved depth of this season’s club. Both Ryan Murphy and Joel Eriksson Ek showed improvement upon last season’s performances to fill the big skates left by Spurgeon and Niederreiter.

Ek’s relative Corsi and relative Fenwick were -12 and -11.3 last season. He’s posted a relative Corsi of -1.3 and relative Fenwick of .6 thus far this season. He still struggles in the faceoff circle, but that seems to be the case for many of the Wild players. The new faceoff rule changes saw Wild players booted from the circles regularly for the first few months of the season, but it’s occurring less and less. Minnesota is 15th in the league with a 50.4 faceoff win percentage but were sixth last season, winning 51.9 percent of faceoffs. Those faceoff numbers should improve as the season progresses, though.

Murphy was and remains an under-the-radar free agent signing. While he’s played just nine games with the NHL club, he’s lifted his 2016-17 relative Corsi from -5.3 to 3.3 and his relative Fenwick from -6 to 5.8. So far, his roughly 18 minutes of ice time per game has been much better than fellow defenseman Marco Scandella’s 18-minute average ice time last season. Scandella’s 2016-17 relative Corsi and relative Fenwick were -1.1 and -2.1, respectively.

And finally, Matt Dumba is starting to look like a keeper. Dumba’s strong slapshot is finding the net more often, and he’s been especially effective in overtime. Dumba’s just four goals shy of his total from last year because he’s taking more shots in the 2:24 of increased ice time he’s averaging this season.

Dumba’s shooting percentage is 10.6 this season -- 2.2 points higher than last year and a career high for Dumba. “Put the puck on net and good things will happen” is how the hockey cliché goes, and it’s especially true for powerful slapshots like Dumba’s. A 100-mile-an-hour puck is hard for goalies to see let alone catch, so most of Dumba’s shots are going to result in fat rebounds. That’s likely why he’s tied for third on the team with fellow defenseman Ryan Suter in point shares at 3.9. And while he still leads the team with 23 giveaways on the season, his relative Corsi is up to .3 after posting a -1.4 last year, and his relative Fenwick is also up from -2.7 to -.9.

Parise’s Back is Back in Action

On Thursday, in the Wild’s 41st game of the 2017-18 season, head coach Bruce Boudreau had his entire roster available for the first time all season. With half the season in the books, the Wild are finally healthy and managed to stay in contention for a playoff spot. They currently hold the second Wild Card spot in the Western Conference and trail Dallas by two points in the standings, but have played one less game and already beat the Stars at home this season. So the Wild’s ability to weather the storm of injuries that has held the team back in the first half of the season takes a lot of pressure off Zach Parise.

Boudreau knew he’d be without Parise to start the season but could only speculate as to how long it would take him to recover from back surgery and what kind of player he’d be post-surgery. But Parise might be one of the hardest working skaters you’ll see. He’s not the fastest, the biggest or the strongest, and his shot isn’t elite, so he skates with a chip on his shoulder. When he’s healthy (and even when he’s not), he looks like the hardest working player on the ice every second he’s out there. Tuesday was the first time I’ve seen him take it easy, and understandably so.

Parise skated on 20 shifts totalling 13:35 in ice time and put three shots on goal against the Florida Panthers in front of his home crowd. Despite Parise pacing himself, he wasn’t a liability on the ice. His 7.3 relative Corsi was sixth on the team, and his 72.7 offensive zone start percentage was second to only Chris Stewart’s 77.8 percent, for what it’s worth, which isn’t much given the sample size. He looked like a capable, third-line forward on Tuesday without exerting maximum effort, but he showed signs of his old self on Thursday.

Parise got into the scoring barrage against Buffalo after kicking a loose puck to his stick behind the Sabres’ net. He faked right, stopped on a dime and accelerated left to create separation from a defender. Then the best part of Parise’s game -- the part injuries and age can’t take from him -- displayed why the NHL should be very afraid of the Wild.

Parise knew his defender followed him behind the net, leaving the back side wide open for Coyle. Parise pushed a backhanded, wrap-around right through the blue paint and onto Coyle’s stick, who buried it in the wide open net to give Parise his first point of the season and the Wild a 6-0 lead just before the end of the second period.

The Wild still trailed the Sabres in shots on goal despite dominating puck possession and zone time, but the quality of their chances far exceeded that of the Sabres. Minnesota picked apart the league’s third-worst defense as measured by goals allowed like a playoff team should, and they didn’t let Buffalo back in the game like the last time the two played..

The Wild were up 3-1 after one period in Buffalo on Nov. 22 but let the Sabres make a game of it despite scoring twice more in the second period. It was 5-3 entering the third, and the Wild ended up playing the final 16 minutes with just a one-goal lead. Coach Boudreau has been hoping to see his team play a full 60 minutes, and the Wild are finally doing so and should be able to continue doing so now that everyone's healthy.

The Wild have an immediate opportunity to improve their playoff chances with a nationally televised game at Chicago on Wednesday, followed by a home game against the Winnipeg Jets, the second seed in the Western Conference as of this writing. After hosting Vancouver the following day, the NHL’s best visit Xcel Energy Center on Jan. 20, as Minnesota will seek revenge against the Tampa Bay Lightning. The Wild were minutes away from earning a point in Tampa Bay with backup goalie Stalock in net before falling in regulation.