4 things you should learn before we lose the Internet forever 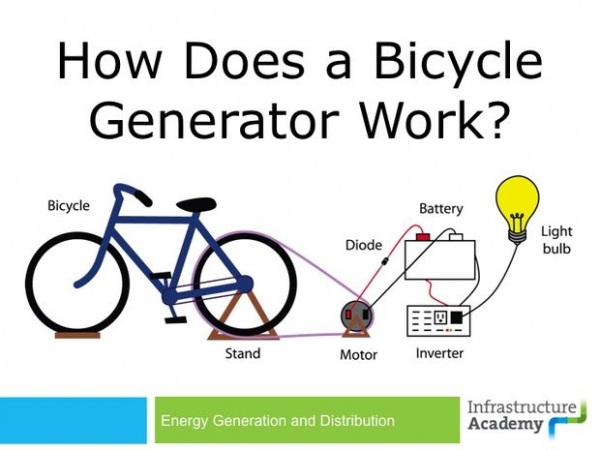 A bicycle generator uses the calories you consume to create electricity. Infrastructure Academy

A terrorist attack of America’s energy grid would be devastating to the Internet. It’s not as though it can survive on life support. While server “caretakers” would likely prioritize which servers need to stay running, like those upon which the economy and banks rely, the 191.78 million kilowatt hours required to run Internet servers daily would require more than 53,000 commercial generators rated at 150 kilowatts. That’s just not possible.

Relying on solar energy for support would also be problematic. The 191.78 million kilowatt hours to run the Internet each day would require two square miles of solar panels dedicated solely to Internet servers. With 27.2 gigawatts of solar panels installed in America as of May 2016, the U.S. would need more than six times that in order to run the internet from solar power.

So it’s time we started using a tool that doesn’t require anything more than food and water to run -- a tool that’s kept people alive for centuries: memory. Committing things to memory could save your life in the event of an energy infrastructure failure, so here are four things you should learn before we lose the Internet forever.

1) How to build a battery

Batteries will be a luxury in the post-energy infrastructure world. Those who have them or can build them will live lavishly. With one car battery or its equivalent, you could run a television and a Blu-ray player for the length of a movie, or even video game consoles for a few hours. But let’s focus on our needs before we get to the wants.

The price of bagged ice would skyrocket, as refrigerators and freezers would become traditional iceboxes. Microwave ovens and conventional ovens would give way to open flames for cooking food. Fire would also be the only way to heat our homes unless you had a battery and electric heater, which would save you from carbon monoxide poisoning and lower your risk of burning down your home or shelter.

Learn how to build a battery out of pennies to power small things like LEDs here. Since ice cube trays will be obsolete, you can use them and some sheet metal screws to build a 9-volt battery. You can make a 12-volt battery out of other batteries, too. You can build an inexpensive, lithium-ion battery pack to run your phone as well.

2) How to install alternative energy infrastructures

A battery is only as good as your ability to recharge it, so learning some basic electrical infrastructure installation will be most valuable. Not everyone will have the ability or means to build a hydroelectric generator, wind turbine or install a solar array to power lights and heat in their house or shelter. But there are enough junk bicycles out there to power lights and heat throughout America.

As long as food can be found, the bicycle will continue to serve as more than just a form of transportation in a post-energy infrastructure America. At night, bicycles will be brought indoors, where people take turns pedalling to power lights and heat and to charge batteries. Here’s how you can build a bicycle generator, which can typically produce 100 watts. Note: bicycle generators are incredibly inefficient, so exhaust your alternative energy options before resorting to the bicycle generator.

A boat will be an advantage enjoyed by those who survive the death of the Internet and America’s energy infrastructure. Only so much food can be found on land, and those with boats will have access to high-protein meals providing healthy calories that allow them to hunt and gather for longer hours.

You can build a boat with hand tools. There are plenty of designs from which to choose as well. Given the situation, however, you might have limited materials for boat building. Good thing a fishing boat doesn’t require much. This one is made from PVC pipe, and since indoor plumbing will be useless given that water pumps wouldn’t be powered, you can just rip those pipes right out of your walls.

4) How to grow food from refuse

Since you won’t be sending your poop to a wastewater treatment plant, you should be using it to fertilize your garden. The most important commodity in the post-energy infrastructure America will be food, and you’ll want to be able to grow as much as you can with whatever space you have.

A good start is using the scraps of food you don’t eat to make more food. You can transplant the roots of green onions after slicing them up as well as celery. You can even plant the tops of carrots and eat the greens.

You can also use trash to grow food. Large plastic jugs like milk containers, egg cartons, produce bags and aluminum trays are all useful in growing food. Shredded paper, cardboard, shoe boxes and paper bags are also useful in the garden.

Lastly, human waste makes for a fine fertilizer, so poop in a bucket and mix it into your garden soil. You can drink your urine when times get really tough.