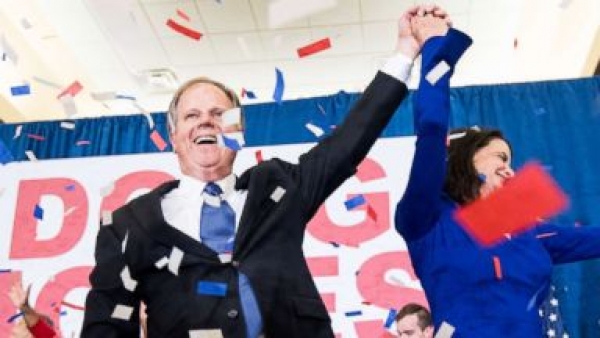 Republicans across the nation are cheering over the results of the Alabama senate race. No, you didn’t read this wrong. Sure, democrats are celebrating over the election victory of one of their own for the first time in 25 years. But it should be no surprise to learn that key republicans are also pleased with the outcome.

The reason for GOP rejoicing is that they have thrown off the albatross of Roy Moore from around their necks. Republicans will no longer have to answer, month after month, every question from the press that begins with: “Now about Roy Moore?”

Few republicans could even begin to defend Roy Moore’s candidacy. It wasn’t just the issue of preying on teenage girls. Sure, that was bad enough. But Moore, as Alabama chief justice, continually failed to abide by the law. In fact, he’s been removed twice from the bench for disobeying the law. Following and enforcing the law is a bedrock premise for any republican elected official. It should be for all of those in public life. But Roy Moore believed otherwise.

It’s one thing as a judge for Moore to write dissenting opinions and even to publicly disagree and criticize decisions from both the Alabama and the U.S. Supreme Court. For those of you who regularly read this column, you are well aware of the blistering criticism I have levied against the federal court system.

But Judge Moore went much further time and time again while serving as Chief Justice of the Alabama Supreme Court. One of the basic functions of being on the state’s highest court is to follow the dictates of the United State Supreme Court, whether you agree or not. Moore feels otherwise, and has said by his actions that he is above the law.

Not only does Roy Moore have no business being elected to the U.S. Senate, he has no business riding a horse. Did you see him on television riding off to vote? Moore had trouble guiding the horse and didn’t even know how to hold the reins. His horsemanship was as feeble as his senatorial campaign.

So why do I say the GOP is better of without Moore? Simple. They will have a much better shot to regain the senate seat in 2020. Alabama is still a strong red state, and if republicans offer even a moderately qualified candidate, it’s hard to see how the new senator, Democrat Doug Jones, could hold on to his newly acquired seat. In the meantime, republicans across the nation will not have to defend Moore’s past legal actions and personal indiscretions.

And remember that republicans still control the senate by one vote. If there is as tie vote that takes place, the republican vice president casts the decisive vote. The challenge will be to see if republicans can hold on to current seats in the coming 2018 election.

On a much sadder note, Louisiana lost one of its legal giants this past week. Federal Judge Jim Brady, from Baton Rouge, died unexpectedly at the young age of 77. I have known Judge Brady for over 50 years, and admired his tenacity and scholarly competence on the bench as well as his open and friendly demeanor.

The Judge was a regular each Monday for lunch at a local Baton Rouge restaurant, where a number of judges and politicians gathered. Jim would work the room like he was running for office, even though he had a lifetime appointment to the federal bench. If there were ever an election for a federal judge, Jim Brady would win in a landslide. He was a good friend and a great federal judge. We will sure miss him.

Tweet
Published in News & Information
More in this category: « Alabama special election was a condemnation of sexual predators, not Republicans All the Star Wars films, including Last Jedi, ranked worst to first »
back to top