There Must be Consequence When it Comes to False Accusations! 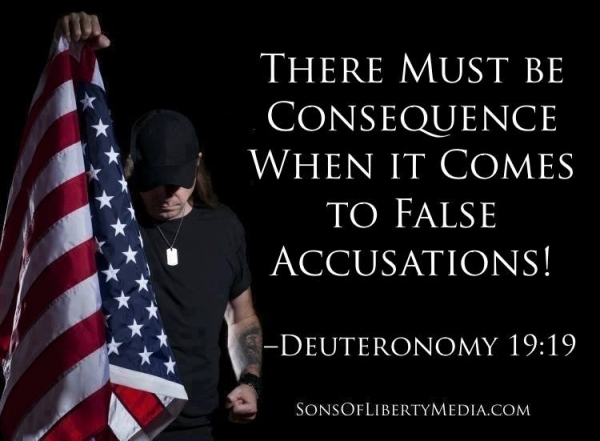 Editor's note - 11/28/17: This story was mistakenly attributed to "Dr. Daliah Wachs," when in fact it was written by Bradlee Dean. The error has been corrected.

It seems that over the last couple of weeks the CIA-controlled media has, once again, succeeded in diverting the American people’s attention away from The Clintons’ Uranium Ore scandal to the fall guys that are conveniently picking up the attention for their sexual promiscuities in office, and that, at a most opportune time, Al Franken, Bill Clinton, Dan Schoen, Tony Cornish and the list goes on.

And these were the ones that have been caught!

Hopefully, this will bring to the light why this country is in the serious trouble that it is in (Psalm 9:17).

These corrupt politicians have been so emboldened to take taxpayer dollars in an attempt to cover up their sexual misconduct.

It is their job to uphold the laws of our Constitutional Republic, not tear them down (Article 4, Section 4 of the United States Constitution).

In a time where the media has declared the guilty as innocent and the innocent as guilty, it is hard, at times, playing the arbiter when it comes to who is guilty and who is not. Yet, for the most part, when the media declares someone innocent, it usually means that they are attempting to protect the establishment players such as the Bushes, the Clintons, the Obamas, etc…  And when they declare someone guilty, you can rest assured, that they are the innocent that are bearing the accusations (John 15:20).

One such individual is Judge Roy Moore.

Conveniently, at a time when Senate Majority Leader Mitch McConnell was becoming unhinged at the prospect of Roy Moore winning the senate seat for Alabama, out of nowhere come Roy Moore’s accusers.

Joe for America reported, The now infamous “Yearbook Signing” that Gloria Allred trotted out yesterday, along with the accuser who gave the worst acting to come out of California in decades, has multiple problems that prove it to be fake.

Then we have Darrel Nelson, the stepson of Judge Roy Moore accuser Beverly Young Nelson, who says the allegations are all lies. Nelson says he is baffled by the timing of the sexual advancement claims and voices his staunch support for the Alabama GOP Senate candidate.

“I’ve known the woman, she married my father many, many years ago. I’ve known her for a while now, and I truly do not believe that she’s being honest about this,” said Nelson.

“To my stepmother, whatever reason you did this, I have a few questions on this,” he continued.  “Why did you wait so long if this did happen? You said you were a teenager when it happened, but here it is now, how many years later? And all of a sudden you’re going to bring it up when we voted him into the House and you trying to get him [taken] out? I’m not going to have.”

Later, Nelson acknowledged that he knew he was going to get backlash from his family, but said clearing up the false allegation is worth the trouble.

“I don’t believe a word she says, but I do believe [Moore] is innocent.”

I do not believe a word of it either, and neither do the American people.  This is why he was up 15 points in a recent poll concerning his run for senate.

What is important here is that when the dust settles, and these accusers are found to be false witnesses, which is a violation of law, it is not for the good of the people in this country to slap these accusers on the hand and let them go and accuse someone else. These false accusers are attempting to destroy the lives of innocent men, period.

Look at the Life of Brian Banks “Guilty until proven innocent!”

And the consequences of the accuser!

Our Founding Forefathers Did Not Tolerate False Witnesses

I discovered that our founding forefathers did not tolerate in the least degree those who bore false witness. I wrote…

Just down the street in Williamsburg where the head and arm restraint stocks, which were located right outside of the local courthouse. A historian and re-enactment actor was outside educating the people who had questions.

One question asked was: “What is the head and arm restraint stocks for?” The actor said that before and after the revolution, the local magistrates would administrate Ecclesiastical Law (Romans 13).

She went on to tell us that crime was not tolerated in the least bit by the colonies because they understood the price paid to establish their freedoms (John 15:13). The stocks were used for those who would lie or commit the act of perjury (lie under oath, Revelation 21:8).

The criminal would be punished by being thrown in jail for up to six months (1 John 3:4). A fine would have to be paid, and this all took place after their head and hands were placed in the stocks as a means of public punishment.

When removing the nails, they would often slit the ear completely off, marking the offender so other colonies, as well as other cities or states, would understand that the person was not to be trusted. Thus, they fulfilled the true definition of “Earmark.”

She ended with saying that it was to teach the person to repent before God so he would not end up in hell (Matthew 3:2; Leviticus 19:17).

Can you imagine the “earmarks” we would see today in the American church, government or in businesses if these laws were still enforced? How they loved their freedoms by demonstrating zero tolerance for crime (Deuteronomy 23:14).

If a false witness rise up against any man to testify against him that which is wrong;

Then both the men, between whom the controversy is, shall stand before the Lord, before the priests and the judges, which shall be in those days;

And the judges shall make diligent inquisition: and, behold, if the witness be a false witness, and hath testified falsely against his brother;

Then shall ye do unto him, as he had thought to have done unto his brother: so shalt thou put the evil away from among you.

And those which remain shall hear, and fear, and shall henceforth commit no more any such evil among you.

And thine eye shall not pity; but life shall go for life, eye for eye, tooth for tooth, hand for hand, foot for foot.

More in this category: « Thanksgiving Leftovers: Foods your pets can and cannot eat How to Stop Mass Shootings »
back to top