Made in America: The all-American home 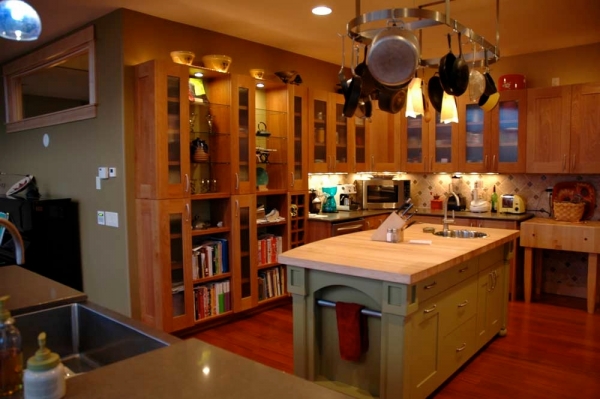 “There’s not a thing in that whole house that isn’t made in this country,” Lewendal said in an interview with GCN Live on Thursday.

The story drew the eye of ABC and a three-part series about the all-American home resulted. Unfortunately, the idea didn’t take, and that’s likely due to the increased cost of buying American, Lewendal said.

“For a very, very entry-level home, the cost could be 15 percent more. Now, if you’re building a high-end custom home … the cost increase could be nothing,” Lewendal informed.

Building a home from American-made building materials has a huge impact on the U.S. economy. According to the U.S. Lumber Coalition, U.S. sawmills and wood preservation industries employ over 90,000 workers across America, which represents an annual payroll of over $3 billion. The U.S. forest products industry is thriving, too, as American forestry exports set a new record in 2015.

The American forest products industry is the fourth largest in the world, but confirming that the lumber you’re using to build your home was born and raised in America is a little harder with Canadian imported lumber coming across the border. Just ask the folks at the home improvement store where they get their lumber. If it’s Columbia Forest Products you’re in the clear. Most Home Depot stores carry Columbia. Screw your lumber together with Brynolf Manufacturing screws.

When it comes to your foundation, it’s a pretty good bet your cement is local. Genova sells American-made PVC pipe for your plumbing, and Pipe-Tytes also makes its parts in America. The Restoria Bathtub Company and Mansfield Plumbing make beautiful bathtubs and toilets right here in the U.S. Rachiele has been making sinks in America since 1999. When it comes to bathroom and kitchen cabinets, The Original Granite Bracket Company, Bertch Cabinet, and Wellborn Cabinets are all local options.

When it comes to running electricity, Mulberry Metals is the only company I could find providing electrical parts that are made in America. There’s no shortage of window producers in the United States, though. I know there’s a Marvin plant in Grafton, N.D., and you can find four more options here. There’s also a plethora of American-made door companies.

Benchmark Foam in South Dakota is your foam insulation provider, and Dupont makes some of the best selective barrier products out there. I’ve seen Tyvek withstand a thunderstorm before we had a chance to put shingles over it and not a drop of water got through the roof. Typar products also provide adequate weather protection. Owens Corning has been producing fiberglass insulation in America since 1935. Fastening shingles or metal can be done with Great American Specialty Fasteners. It doesn’t get more American than that.

It wouldn’t be much of a home without a roof over your head. Classic Metal Roofing Systems provides metal roofing products that are made right here in the U.S. Auburn Tile sells concrete roofing tiles that look great, and if you’re wanting a traditional shingle, GAF has been king since 1886. I would recommend putting a roof over your head that makes your electric bill a thing of the past, and I don’t mean attaching a solar panel to your roof. Tesla has managed to create beautiful roofing tiles that convert solar energy into electricity. It even pays for itself in eight to 11 years.

Vinyl siding for your all-American home can be found here, and if you want that old-timey, log cabin look, check out EverLog Concrete Log Systems. Ventilation products can be found here. Uptown Floors, Homerwood Hardwood Flooring and ModuTile are all American-made flooring options. If you’re willing to lay down tile (trust me, it’s a literal pain in the backside), here’s a list of American, ceramic tile companies.

If you want to put up fencing, Aluminum Fences Direct is out of North Carolina, Centaur Fencing does business in Alabama, and Delgard Premier Aluminum Fencing is also American-made. Genova even makes PVC fencing products.

Understandably, not everyone can afford to build the all-American home, so consider an American Tiny House. Tiny homes are very trendy right now and cost around $70,000 for 320 square feet. They’re delivered pre-fabricated and look a whole lot bigger than they actually are.

If you don’t require a lot of space this is a great way to become an all-American homeowner, and owner Andrew Pleban said tiny homes are completely customizable, so if you want American-made, they’ll find American-made products.

“We’re a custom builder, and we’re building what the customer wants so sometimes and we have to go out and get it,” he said, adding that about 95 percent of all their models are made from building materials made in America.

So not only is it possible to build a home from all-American building materials, but it’s been done and should continue to be done. In the next part of our “Made in America” series, we’ll decorate your home with all-American products.

ABC's coverage of the all-American home, part one ABC
More in this category: « United Airlines and “The Volunteering!” How will Canada’s legalization of marijuana impact America? »
back to top