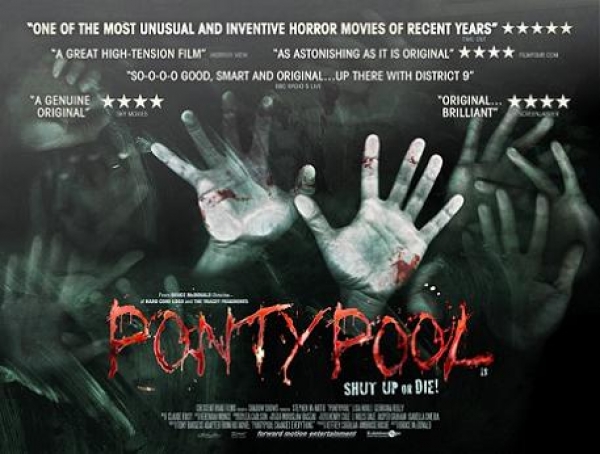 Halloween is upon us and brings the holy trilogy of: trick or treaters, costumes and candy. And, of course, inevitable lists of horror films you should watch for your Halloween scares.

Now, I love said lists but the problem with them is you tend to see the usual suspects. Take your pick of a franchise film - Nightmare on Elm Street, Child’s Play, Paranormal Activity, Scream, Friday the 13th, Saw, Halloween, Hellraiser, [Insert Random Name] of the Dead, etc., etc. Throw in obligatory mention of The Exorcist, The Texas Chainsaw Massacre and The Shining, add another Stephen King adaption for good measure, class it up with a vintage black and white or three like: Creature from the Black Lagoon, Dracula, Frankenstein and toss in whatever is currently hip and popular with the cool kids, such as -- It Follows and Babadook.

Let’s use some imagination here. Don’t get me wrong, there are plenty of movies in the aforementioned list that I adore. But there are a lot of great horror movies that have slipped under the radar. If you are a true horror film aficionado there probably won't be anything here you've not heard of. But for most movie folk this should be a nice list of under appreciated horror films you may dig. Also, I'm not really a fan of horror comedy so none of them made my list.

The trailers were meticulously screened to avoid spoilers. No, seriously. I watched multiple trailers for all of these movies and selected ones that were cool but vague and non spoilerific!

Some of my favorite underappreciated or forgotten horror films -- presented alphabetically:

Coherence (2013): More of a dark psychological sci-fi thriller than traditional horror film. Coherence naturally evolves from a dinner party set piece into a mind twisting nightmare. Director James Ward Byrkit shot the extremely low budget movie without a script. Instead he worked from a detailed 12 page plot synopsis and each day passed notecards to the eight actors, outlining goals they had to accomplish with all improvised dialog. It’s one known star, Nicholas Brendon (Xander of Buffy the Vampire Slayer fame) had this to say, “...every day we had five different things we had to convey … since there was no script, I had no idea how it ended … to be quite honest, I never really knew what was going on fully until I saw the movie done.  When I saw the movie, I’m like, ‘Oh, Shit, this is awesome!’”  Coherence official trailer.

A Horrible Way to Die (2010): An indie darling the toured the festival circuit but never really got a wide release.  A Horrible Way to Die follows lead Sarah, played to perfection in a truly mesmerizing performance by Amy Seimetz. Sarah is in full recovery mode from … something. Something recent and very traumatic. The story shifts back and forth from her past to her present as we slowly begin to understand her horrific history. And then a friend of Sarah’s goes missing, in the present, and she realizes her past may have caught up with her.   A Horrible Way to Die official trailer.

Kill List (2011): Another movie on the list that is more dark psychological thriller than traditional horror. Two former British soldiers become hitmen. Gal is laid back and uncynical, Jay is still traumatized from an unspecified mission disaster during his soldiering days. Their newest contract spins their lives wildly out of control and leads to some very unexpected, very disturbing places. Kill List is a slow burn of a film and requires viewing patience, not least because the thick accents are, for a time, difficult to understand. Kill List official trailer.

Martyrs (2008): Oh, dear God. This movie is not for the faint of heart. You have been warned. Martyrs is the story of Lucie Jurin. As a young girl Lucie escapes from a slaughterhouse where she has been imprisoned and tortured for years. The perpetrators go uncaught and their motives remain a mystery. Lucie spends more than a decade in an orphanage and, while she has recovered physically, she is still plagued by nightmares and suffers debilitating visions of a ghoulish emaciated woman hunting her. Lucie leaves the orphanage and tracks down the family that captured & tortured her and begins to extract unbelievably violent, bloody revenge. But -- she might be in the wrong house. The family Lucie is brutalizing might be completely innocent. Martyrs, along with High Tension, Frontiers and Inside are widely regarded as the godfathers of the New French Extremity film movement.  A movement that refers thematically and stylistically to a wide range of French filmmakers that tackle taboo subjects and was once described by film writer Matt Smith as, “[a] crossover between sexual decadence, bestial violence and troubling psychosis." As you can imagine, most of the films within the New French Extremity movement are -- well, not worth viewing.  But Martyrs is. It is the only great “torture porn” movie I would ever recommend -- with reservations that it will still not be for most folks.  I believe I’ve given you enough information to know if this film is for your particular taste, or not. (Make sure to watch the original 2008 French w/ English Subtitles version and NOT the American Remake). Martyrs official trailer.

May (2002): Delightfully awkward, devilishly lonely May Dove Canady suffered from a rough childhood due to endless bullying because of her lazy eye. Her only friend -- a glass-encased doll named Suzie. But then May meets a boy. A real boy. Angela Bettis knocks it out of the park with her quirky awkward performance. May is Lucky McKee’s only good film. Seriously. If you see the name Lucky McKee attached to any other film not called May, immediately throw it in the garbage. May official trailer.

Pontypool (2008): The greatest zombie apocalypse film (that might not actually be a zombie apocalypse film) you have never seen. Shock jock Grant Mazzy and his producer Sydney Briar are front and center in their small town radio room when the world outside goes --- crazy. Both Stephen McHattie (Grant) and Lisa Houle (Sydney) are superb in the lead roles. Based on the Tony Burgess novel Pontypool Changes Everything  and inspired by Orson Welles' infamous radio broadcast of The War of the World's. Pontypool official trailer.

[REC] (2007): Probably the best known film on the list. [REC] is a found footage-esq masterpiece about a TV reporter and her cameraman following emergency workers into an apartment building and are quickly locked inside with -- something. Cleverly hiring real life TV personality Manuela Velasco to portray a fictional version of herself and using only cameras that would be available to a TV news show to shoot the movie create a uniquely realistic atmosphere. [REC] spawns a few unsatisfying sequels and there is even a decent American remake called Quarantine but the original version in Spanish is really the big boy on the block.  [REC] official trailer.

Triangle (2009): What begins as a very seemingly well acted but mundane ghost ship story quickly evolves into a mind bending, bloody journey of loss, regret and choices. Triangle is a movie that gets better and better with repeat viewings. This film, The Loved Ones and Pontypool are my three go to films when I am asked for a horror film recommendation. I was unable to find a trailer that didn’t spoil some of the film’s surprises so I didn’t attach one. Look it up if you want but Triangle is best viewed with a clean slate.

Who Can Kill a Child? (1976): Tom and Evelyn, two English tourists, arrive on a city island during the last leg of their vacation before Evelyn gives birth to their third child. But -- they can’t seem to find any adults. And the silent grim faced children that run in packs all over the town cast suspicious glances their direction but refuse to speak with them. A Children of the Corn esq narrative that actually came out years before King’s story (which first appeared in print form in Penthouse in the late 70’s).  Based on the Juan Jose Plans novel The children’s game, who adapted the screenplay under a pen name. This movie was widely unavailable for decades but finally came out on DVD in 2007. There is no Blu Ray edition. Who Can Kill a Child? official trailer.

A Horrible Way to Die is a 2010 American horror film written by Simon Barrett, directed by Adam Wingard.

The House of the Devil is a 2009 American horror film written, directed, and edited by Ti West.

The Loved Ones is a 2009 Australian horror film written and directed by Sean Byrne.

Martyrs is a 2008 French-Canadian drama horror film written and directed by Pascal Laugier.

May is a 2002 American psychological horror film written and directed by Lucky McKee.

Pontypool is a 2008 Canadian horror film directed by Bruce McDonald and written by Tony Burgess, based on his novel Pontypool Changes Everything.

REC (stylized as [•REC]) is a 2007 Spanish zombie horror film, co-written and directed by Jaume Balagueró and Paco Plaza.

Who Can Kill a Child? (Spanish: ¿Quién puede matar a un niño?; also released as Island of the Damned) is a 1976 Spanish horror film directed by Narciso Ibáñez Serrador.

More in this category: « Democrats finally ready to pick a fight they can't win, yet Opinion: Ranked-choice voting should be implemented everywhere »
back to top