Democrats finally ready to pick a fight they can't win, yet 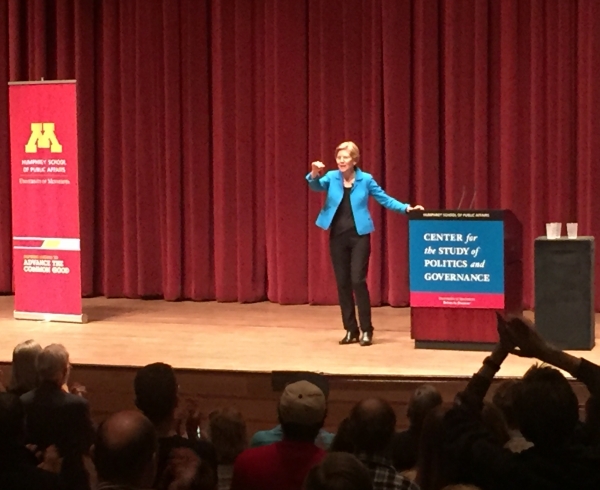 Congress passed a bill Wednesday that makes it harder for consumers to sue banks. The Consumer Financial Protection Bureau’s arbitration agreements rule protected users of credit services from being forced into arbitration rather than being allowed to join together in class-action lawsuits against financial firms with other users who were wronged.

Sixty days after Donald Trump signs the bill it will go into effect, providing little protection for consumers when financial firms wrong them in the future. The right of consumers to join together in class action lawsuits is not unlike the right unions have to collectively bargain contracts with employers, so, Conservatives are, of course, opposed. Democrats, on the other hand, are finally ready to pick a fight on the subject of economic inequality.

Massachusetts Democratic Senator Elizabeth Warren was at the University of Minnesota speaking on the very subject of economic inequality on Sunday. She’s not happy with consumer protections and regulations of financial firms she championed being undermined by the Conservative-controlled Congress, and she’s ready to pick a fight over it. Unfortunately, she and the Democrats are in no position to fight, and likely won’t be until after the 2020 election -- if at all.

The 2020 census will offer an opportunity for Democrats to undo the gerrymandering that has served Republicans so well in state elections since 2010, and it will be just in time for all 435 seats in the House of Representatives are up for reelection. That’s exactly why former President Barack Obama and former Attorney General Eric Holder are spearheading the effort to redraw district lines in 2020.

There are states that have taken the mapmaking pen out of the hands of politicians, though. In Washington, California, Idaho, Arizona, Alaska and Montana, an independent commission redraws district lines. In Maine, New York, Rhode Island and Iowa, an advisory commission redraws the districts, but that accounts for just 10 of the 50 states. The rest allow politicians to redraw district boundaries, most of which consist of legislatures that rarely lean Left, so if Democrats want to pick a fight over economic inequality, they’ll have to level the playing field first.

Democratic Senator of Massachusetts Elizabeth Warren speaks at the University of Minnesota on economic inequality, Sunday, Oct. 22, 2017. Anthony Varriano video
More in this category: « Gene's Technology Corner: More About the Business Case for the Mac Underappreciated horror films for Halloween »
back to top