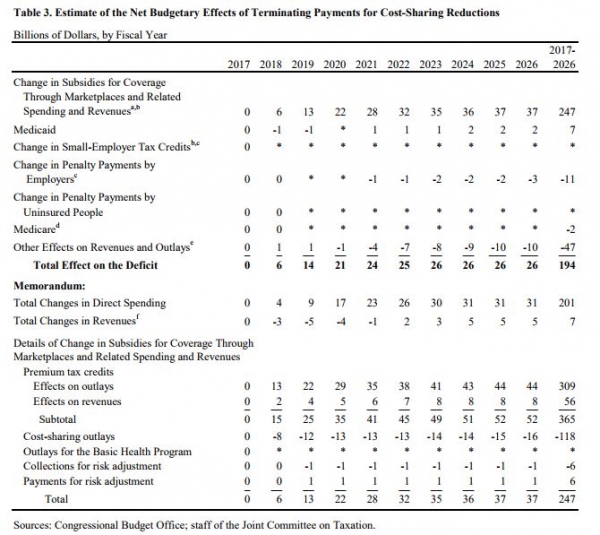 Ending the $7 billion in subsidies made to insurance companies would result in $194 billion added to the federal deficit, according to the nonpartisan Congressional Budget Office. Anthony Varriano screenshot

Donald Trump’s executive order he declared killed Obamacare hasn’t actually changed any laws, but if Trump cuts subsidies paid to health insurance companies like he proposed, it would increase premiums for middle-class Americans and increase the federal deficit by $194 billion over the next decade, according to the nonpartisan Congressional Budget Office.

The $19.4 billion that would be added to the federal deficit annually on average is $12.4 billion more than the government is currently paying to subsidize health insurance discounts for low-income Americans. That $7 billion the federal government pays in annual subsidies to cover the discounts insurers are required to offer under the Affordable Care Act insures helps about 7 million Americans afford health insurance.

Since insurers are required to offer those discounts by law, that $7 billion in lost income (and any in lost premiums due to more Americans choosing to go uninsured) will fall on the backs of middle-class Americans who don’t receive insurance through their employers. Individuals making around $48,000 or a family of four earning almost $100,000 annually are expected to see their premiums increase 20 percent next year.

While Donald Trump’s executive order he claimed killed Obamacare hasn’t actually changed any laws, it could eventually allow associations to skirt state rules so employers can provide employees health insurance that covers next to nothing.

Under the new executive order, an association of businesses offering similar products or services could choose which state’s marketplace they want to use to provide health insurance to all the association’s employees -- regardless of location. The association could and likely would pick a state offering the cheapest option providing the fewest benefits for its employees, resulting in less money paid in premiums and, therefore, higher premiums for individuals and families who don’t get insurance through their employer.

These associations would be considered large employers, which aren’t subject to the same rules as individual or small group plans under the Affordable Care Act. They are not required to cover all the ACA’s essential health benefits nor are they required to offer insurance that covers a minimal percentage of their employees’ medical bills. This puts the bulk of the medical risk and expense burden on the employee instead of the insurance company while also lowering expenses for employers. This will also result in individuals and families picking up more of the tab when it comes to premiums paid.

The executive order also expands short-term insurance plans, which were designed for people temporarily out of work for a limited amount of time. Like insurance plans for large businesses, these insurance plans are not required to meet ACA regulations of providing essential health benefits, not charging sick people more than healthy people for health insurance or denying people insurance based on preexisting conditions or medical history.

The executive order will lift the burden of insurance premiums off the shoulders of businesses and onto the shoulders of individuals and families, which will result in more under- and uninsured Americans and higher premiums.

More in this category: « Gene's Technology Corner: Consumer Reports does it to Apple again New Minnesota Timberwolves experience worth every penny »
back to top