Why are President Donald Trump’s appointees protecting the Clintons? 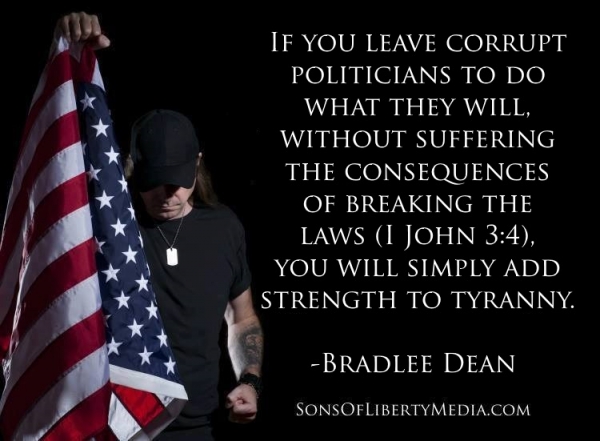 “If Hillary Clinton is not brought to justice, then America is doomed.” -Live feed

The above statement may sound over the top or extreme in many different ways, yet it is true.

To put it into perspective, look at what President Thomas Jefferson stated:

"The two enemies of the people are criminals and government, so let us tie the second down with the chains of the Constitution so the second will not become the legalized version of the first."

Taking it to the present, we recently heard Newt Gingrich say that the way to resolve the problem of corruption is to “Start putting a few people in jail, you’ll see the leaks dry up dramatically (Isaiah 56).”

Clearly, Scripture teaches us in Isaiah 26:9 that “…when Thy judgments are in the earth, the inhabitants of the world will learn righteousness.” Also read Isaiah 51:4.

Yet, Americans fail to do so, and what they do is draw the seat of violence nigh unto themselves.

“Ye that put far away the evil day, and cause the seat of violence to come near.” -Amos 6:3

Furthermore, it is inscribed on government buildings throughout America in stone.  On one, Moses holds the two tablets of the Law (Exodus 20) with the inscription:

“Justice the Guardian of Liberty”

The reason this is happening is because the American Church (78% claim to be Christians -1 John 2:4) has been taught by the hirelings (John 10:12), who occupy the pulpits in this country, that they have no business in judging right from wrong. How ridiculous!

Maybe they should try that next time they break speeding laws.  Just rip up the ticket, throw it at the police officer’s feet, and tell him “Who are you to judge me?” See how far that gets them!

I say, “Twist not Scripture, lest you be like Satan.”

It amazes me how Americans give a pass to corruption as if to suggest that the politicians are above the law.

“…they overpass the deeds of the wicked: they judge not the cause…” (Jeremiah 5:28)

Didn’t the representatives of “We the People” put their hand on the Bible swearing to uphold the laws found in our Constitution? YES THEY DID!

“They are waxen fat, they shine: yea, they overpass the deeds of the wicked: they judge not the cause...” (Jeremiah 5:28)

This was Jeremiah preaching to a people that fell under the judgments of God.

America, 8 months ago a new president was sworn in. If you remember, for a long period of time on the campaign trail, you were promised that he was to bring forth a “special prosecutor” to deal with “Crooked Hilary.” Donald Trump at this point has done nothing, worse yet he told Americans that, “We owe her a major debt of gratitude.” That’s the opposite of what he promised to do (Matthew 23:3).

Statement regarding the decision:

We’re happy with the ruling, but it is unbelievable we’re being opposed by Trump appointees in the State and Justice Departments on the Clinton email issue.  President Trump ought to be outraged his appointees are protecting Hillary Clinton. The State Department should initiate action with the Justice Department – and both agencies should finally take the necessary steps to recover all the government emails Hillary Clinton unlawfully removed.

Here is the background.

On April 30, 2015, we sued former Secretary John Kerry after the State Department failed to take action on a letter we sent to Kerry “notifying him of the unlawful removal of the Clinton emails and requesting that he initiate enforcement action pursuant to the [Federal Records Act],” including working through the Attorney General to recover the emails.

After initially being dismissed by the district court, our lawsuit was revived on appeal by the U.S. Court of Appeals for the District of Columbia Circuit on December 27, 2016. The Federal Records Act states that an agency head “shall” initiate an action through the Attorney General when he becomes aware of any unlawful removal of agency records.

The Trump administration defended the handling of the email matter by the Obama administration and filed two declarations from the FBI trying to justify the State Department’s refusal to follow the law and refer to the Clinton email issue to the Justice Department.

As the decision notes, the second FBI declaration is non-public and was filed in camera and ex parte with the court. Judge Boasburg rejected the State Department’s arguments that the FBI declaration be withheld to protect grand jury secrecy: “After reviewing the document in camera, the Court concludes it largely rehashes information already made public, thus obviating any need for secrecy.”

Chairman Chuck Grassley and Senator Lindsey Graham, chairman of the Judiciary Subcommittee on Crime and Terrorism, requested all records relating to the drafting of the statement as the committee continues to review the circumstances surrounding Comey’s removal from the Bureau.

The senators wrote to the FBI: “Conclusion first, fact-gathering second—that’s no way to run an investigation. The FBI should be held to a higher standard than that, especially in a matter of such great public interest and controversy.”

And so should a president be held to his promises to a people that entrusted him to represent them in the first place.

More in this category: « The Boy Scouts of America opens membership to girls Gene's Technology Corner: Consumer Reports does it to Apple again »
back to top