Divisive and Diversive Tactics at Work in America 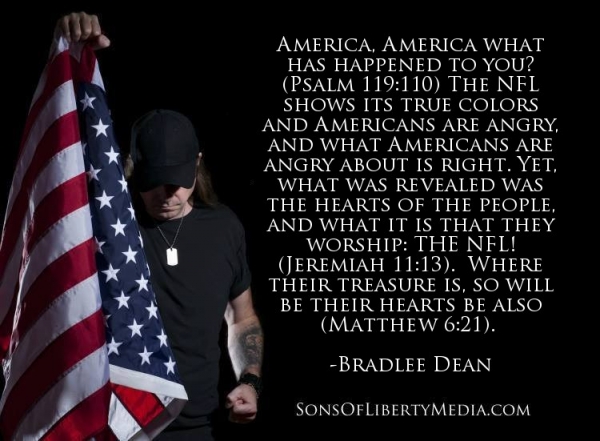 In politics, nothing happens by accident. If it happens, you can bet it was planned that way. –President Franklin D. RooseveltAmerica, America what has happened to you? (Psalm 119:110) The NFL shows its true colors and Americans are angry, and what Americans are angry about is right. Yet, what was revealed was the hearts of the people, and what it is that they worship: THE NFL! (Jeremiah 11:13).  Where their treasure is, so will be their hearts be also (Matthew 6:21). Grown up men with tights on fighting over a pig ball. How shameful! Babies being slaughtered in the womb, sodomy, indoctrination of America’s posterity etc… Where is the uproar? The hypocrisy stinks to high heaven (Matthew 23).I was George Orwell who said, “Football and Beer….filled the horizon of their minds. To keep them in control was not difficult!” How true that statement is. Can you imagine a people that still feared the Lord (Proverbs 16:6) and were indignant when it came to correcting corruption in the Church and in the government?

Yet, it first starts with the individuals (Acts 20:21).The political tactics are in full force against the controlled and deceived, who have not yet learned how “Real Life” lived out (Hosea 4:6) are once again being played by those that they complain about through led opposition. While everyone is whining about the NFL, who, I ask you, is paying for the tickets that support these Communists? The government is hard at work behind the scenes attempting to pass unlawful healthcare legislation formerly named under Mitt Romney as Romney-Romney Care, Barrack Hussein Obama as ObamaCare, and now under a brand new administration, the American Health Care Act.

The agenda goes forward regardless of what the new President has promised. Whenever there is a big story in the media, look for what it is that they are trying to distract you from. The Gullibility of the American People!

“The typical American voter is so stupid, his dog teaches him tricks.” – Jonathan Gruber architect of Romney-Obama-CareThe American people have accepted Supreme Court sanctioned murder of the innocent.

They have accepted the redefinition of marriage by the likes of a radical lesbian named Elena Kagan, who has never judged a case a day in her life.

The list goes on concerning the Supreme Court’s attacks against America and Constitutional Law (Article 4, Section 4, The United States Constitution).

Apparently, these injustices seemed to have missed that which the law teaches in law school (1 Timothy 1:7).“No enactment of man can be considered law unless it conforms to the Law of God!” –William Blackstone, Commentaries on the Laws of England

President Andrew Jackson said, “The Bible is the Rock upon which our REPUBLIC rests” (Exodus 18:21).

He was also the President that said, "If the Supreme Court is the final arbiter of what the Constitution says, then we have ceased to be our own rulers (Under God), and the Supreme Court is our ruler."Rather than getting caught up into the debate that they want you to get caught up into, the question that should be presented to those who call themselves legislators is, “Where are you deriving your authority from to implement these unconstitutional acts?”

It is a question that they simply cannot answer.

This brings me to this point: “If they can get you asking the wrong questions, they do not have to worry about giving you the right answers.”Without further ado, let me bring to you Jonathan Gruber.  Again, this is the architect of Romney-Obama–care, or rather the clown that is laughing at you, America.He also said “Lack of transparency is a huge political advantage. Call it the stupidity of the American voter or whatever, but basically, that was really, really critical for the thing to pass” when speaking of Romney-Obama–care.

He also said, “When we're done with employer-based health insurance, it will have as much life in it as Jimmy Hoffa.” “P.T. Barnum said a sucker is born every minute, but his estimate was laughably low.” America, your children and future generations are being enslaved by those who are committing crimes against you (Deuteronomy 28:68).It is time for 318.9 million people to stand up and deal with those who are only entertaining the destruction of this country (Psalm 94:16).

Let those who profess to be wise (Roman 1:22) be taken by their own lawless counsel (Job 5:13).In closing, Harriet Tubman said when asked of the slaves that have been freed by her hands, “I freed a thousand slaves. I could have freed a thousand more if only they knew that they were slaves” (Hosea 4:6).“Shall the throne of iniquity have fellowship with thee, which frameth mischief by a law? They gather themselves together against the soul of the righteous, and condemn the innocent blood. But the Lord is my defence; and my God is the rock of my refuge. And he shall bring upon them their own iniquity, and shall cut them off in their own wickedness; yea, the Lord our God shall cut them off.” -Psalm 94:20-23If America would only repent, then the joke would be on the lawless!There is no in between. God or tyrants!

Bradlee Dean is a guest contributor to GCN news. His views and opinions, if expressed, are his own and do not reflect the views and opinions of the Genesis Communication Network. Bradlee's radio program, The Sons of Liberty broadcasts live M - Sat only here at GCN.

More in this category: « Trump tax plan will benefit big business and the super rich and increase federal deficit Opinion: ISIS-influenced or not, Las Vegas mass shooting proves automatic weapons must go »
back to top