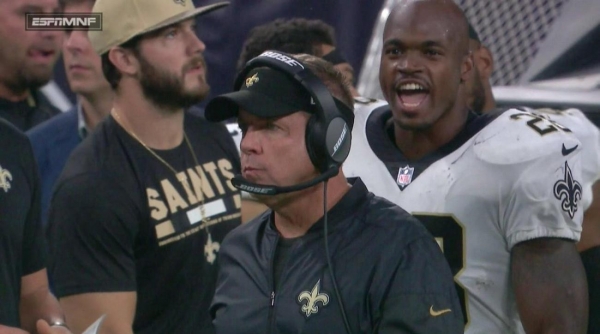 UPDATED: This is an archived story and may be out of date. Peterson has since been traded from the Saints to the Cardinals.

Adrian Peterson wanted out of the Vikings franchise. His contract with the Vikings would have netted him several million dollars and, probably, a decent amount of playing time. But that wasn’t good enough for him. So he moved on. Peterson was the face of the MN Vikings for almost a decade and I was sad to see him leave, but it really was time for him to go.  A few months ago I wrote about that very thing in an Open Letter to Bridgewater, Bradford and Peterson.

Even at the age of 332 (which is like 55 in running back years) Peterson thought he had a few more 1,500 yard seasons in him. He also though, as a free agent he would command nine to twelve million dollars per year.

Okay. Well, this is the NFL and players move on. It happens.

Peterson's journey went exactly how everyone, except for Adrian Peterson, expected -- no one wanted to hire a 32 year old running back. Especially, not one that has had two reconstructive knee surgeries. And, of course, they most certainly did not want to pay him -- nine to twelve bloody million dollars!

The few meetings Peterson had with NFL coaches or owners went nowhere. Calls from interested teams were virtually non existent. The Patriots passed. The Seahawks may have been interested but -- no, never mind, they passed too.

It was kind of embarrassing. Peterson should have retired. But then, suddenly -- the New Orleans Saints offered Peterson a roster spot for about one tenth of his asking price and all NFL fans everywhere went, “Wait --- what? Who? Why? Peterson will never take a job with the Saints. He'd rather retire!”

Except -- nope. He would indeed take a job with the Saints.

I know! The Saints have built their offense on the throwing arm of Drew Brees. The Saints don’t run the ball! If they hire Peterson it will just be to use him as a play action decoy -- so Brees can pass.

As a New Orleans player, Peterson must know he’s only going to touch the ball about six or eight times per game, right?

Peterson has now played four games as a Saints running back and he is firmly set in place as the third string running back. That’s right, “third string.” Behind starter Mark Ingram and second string rookie back, Alvin Kamara. In four weeks as a Saint, Peterson has produced 81 running yards on 27 carries. That’s 3 yards per carry. So, obviously he's frustrated. But to be honest, both Ingram and Kamara are more productive than Peterson. And both Ingram and Kamara can pass protect -- which has always been one of Peterson's universally known weaknesses.

Peterson has politely voiced his concern to the press with his now infamous, “I didn’t sign up for for nine snaps (per game)” interview.

Well, Mr. Peterson, I don’t know what the New Orleans Saints staff told but, yes -- you most certainly did sign with Saints to get nine snaps per game. And you should be lucky to get that.

On the flip side of things, over the same four games, the MN Vikings started rookie running back Dalvin Cook. Cook amassed 354 yards on 74 carries for 4.7 yards per carry. Sadly, Dalvin Cook was injured in week four and will sit out the remainder of the season.

I’m almost certain Peterson could be far more productive in future games with the Saints, but he will never get the game time to develop into the threat he was in MN.  Peterson is not an "out the gate" type of running back. Peterson is a slow burn. His uncanny endurance is legendary. He gets stronger as the game goes on. He needs twenty snaps per game in order for his per average carry to increase because he tends to pick up speed, vision and yards in quarters three and four. Peterson needs time. He needs snaps.

But they just don’t do things that way in New Orleans.

For now, Peterson is a non productive team member for the team that headhunted him and, at the time in 2009, his teammates -- The New Orleans Saints Bounty Scandal.

But Peterson didn’t retire. He became a New Orleans Saint.

A New Orleans Saint with 81 yards on 27 carries.

Again -- something about karma and its ugly head.

More in this category: « One-third of Americans Have “Bad Teeth” Aaron Hernandez had “Most Severe Case” of CTE: Family to Sue NFL »
back to top