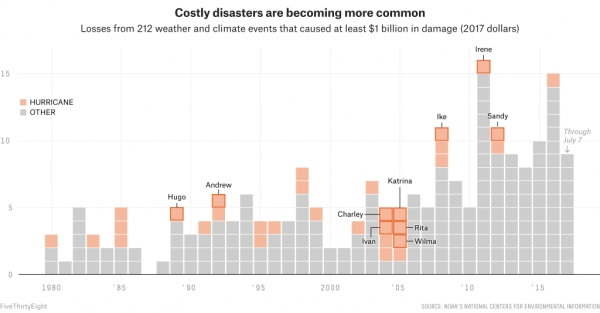 Mother Earth is doing her best to convince climate denying Americans that global warming is no hoax and that people are responsible for the increasing instances and intensity of weather disasters. She started by flooding the Gulf Coast with category-three hurricane, Harvey, which AccuWeather predicts will cost America more than Hurricane Sandy and Hurricane Katrina combined.

But Hurricane Harvey was just the beginning of America’s hellish hurricane season of 2017. Floridians are now evacuating their homes as category-five hurricane, Irma, bears down on them after reportedly destroying 90 percent of buildings in Barbuda, leaving half the population homeless. The storm also left two-thirds of Puerto Ricans without power, and south Florida was placed on hurricane watch, as sea levels could rise anywhere from five to 10 feet.

Three hurricanes forming in the same ocean is unusual, but it’s been happening more often lately. It last happened in the Atlantic Ocean in 2010, when Hurricanes Igor, Julia and Karl followed almost the exact path of hurricanes Irma, Jose and Katia. And for the first time ever in 2015, two category-three hurricanes formed in the Pacific Ocean simultaneously, with a third category-two hurricane accompanying the storms.

Some God-fearing Americans might think intensifying hurricane seasons and increasing instances of destructive weather events is God’s way of punishing us for legalizing abortion or same-sex marriage. Or maybe God is punishing communities that have allowed themselves to be overrun with illegal immigrants, even though every hurricane inevitably punishes communities with large populations of immigrants because hurricanes, like immigrants, tend to reach their destination by sea.

But Hurricane Harvey hasn’t been discriminatory when it comes to the lives it’s claimed, and neither will Irma. If America’s hurricane season from hell is really a hurricane season from heaven, there’s no evidence that God is attempting another Great Flood. In fact, there’s a perfectly reasonable explanation for the increased instances and intensities of these storms: man-made global warming.

Three-quarters of man-made, greenhouse gas emissions are a result of human energy consumption. Those greenhouse gases, most notably carbon dioxide and methane, are responsible for 82 percent of global warming. When Earth’s atmosphere warms, polar ice melts. When polar ice melts, sea levels rise, but it’s the extreme increase in polar temperatures that have and will continue to create more hurricanes and other destructive weather events.

Arctic temperatures up to 59 degrees Fahrenheit warmer than average have not only left the size of the polar ice caps at an all-time low, but has exposed the dark depths of the Arctic sea to the sun, which further increases sea temperatures. That resulting increase in temperature narrows the difference between the Arctic sea temperature and that of southern seas. This weakens the 250-mile-per-hour winds of the jet stream that keep cold, Arctic air circulating the Arctic where it belongs. The slower jet stream winds allow cold, Arctic air to escape south, and warm, southern air to move north, resulting in more extreme weather at lower latitudes. Hence Hurricane Harvey, Hurricane Irma, Hurricane Jose and Hurricane Katia.

So the more we as a species emit carbon dioxide and methane from oil and natural gas drilling to then burn in our vehicles and appliances, the more hurricanes and destructive weather events we create. If there’s any good to come of Hurricanes Harvey and Irma, I hope those climate deniers affected by the storms now have a reason to change their mind on global warming and change the way they live and vote.

One of the most common answers I get as to why people don’t do their part to limit man-made climate change is that the earth is going to die anyways, and they’re not going to be around to see it. These people are treating Earth like a possession instead of a living being. It’s as if climate deniers see Earth as a motel -- or better yet -- a prostitute. They think the transaction makes the person a possession, and since they pay Earth’s rent, they own Earth and can do whatever they want to her.

If Mother Earth is a prostitute, she’s a diseased, obese hag who’s been used up and abused too often, but that doesn’t stop people from paying for her services. Corporate executives fill her up with vibrating probes to entice her sexual secretions to the surface to be collected and sold. They run trains on her that spill toxic substances on and into her. Every trick she turns results in another ejaculation of carbon dioxide or methane into her atmosphere. As a mother, though, she has to put food on the table and pay the rent, so she has to take it lying down -- or whatever way the John wants to deliver it.

But all that abuse builds up and inevitably has to be released if Earth is to avoid suicide. So Earth unloads on the unsuspecting masses when properly triggered, discriminating against none, for no one is truly innocent. Even the recyclers and Greenpeace volunteers didn’t do enough to prevent her from resorting to prostitution. They should have been more adamant about treating Earth with respect and done more to persuade people that she’s indeed a person -- not just a prostitute. Society as a whole has failed Earth and will pay the price.

So think of Mother Earth as your own mother. Sure, she’s going to die just like Earth, but does that mean you treat her as if she’s already dead? Would you smoke around your mother knowing she struggles to breathe in her old age? Then don’t drive when you can walk, bike or take public transit. If you can afford it, buy an electric vehicle or outfit your house with renewable energy sources before the tax incentives end. You want your mother to be as comfortable as possible when she dies, so make Mother Earth as comfortable as possible when she dies. She too gave birth to you and continues to care for you even when you don’t care for her.

Denying the existence of man-made, global warming will only leave us in a cycle of perpetual rebuilding. We’ve gone and pissed off Mother Earth with our wasteful, selfish ways. It’s well past time we as Americans and as a species make up for it before it’s too late.

More in this category: « What To Do About Rising Flood Insurance Rates? Parents of Public School Students, What Are You Supposed To Do? »
back to top