Queens of the Stone Age: The best band of the Millennial generation 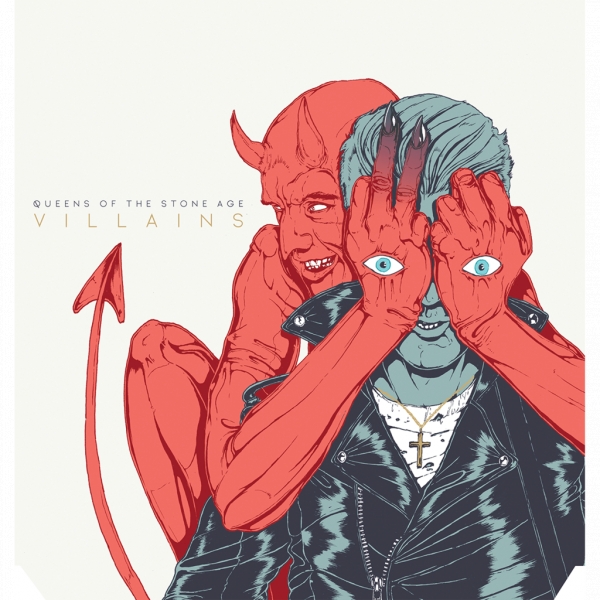 Traditionalists had The Beatles. Baby Boomers got the best of Pink Floyd. Generation X was all about Michael Jackson. And with the recent release of Villains, rockers Queens of the Stone Age have become the best band of the Millennial generation.

I remember where I was when I first heard Songs for the Deaf, and that sort of Proustian precision is usually reserved for traumatic events like 9/11 or the Oklahoma City Bombing, or major achievements in sports, like the Minnesota Twins winning the 1991 World Series.

The deep red color and clever design of the CD caught my eye while flipping through a friend’s CD case during a high school tennis meet. I thought the sperm entering the egg forming a “Q” was a pretty cool logo and asked my friend and occasional doubles partner what kind of music it was. “You should just listen to it,” he said. So I did, over and over again, all the way home, until my friend had to remind me to give him the disc back when our bus pulled up to the high school.

I remember thinking after a second time through Songs for the Deaf that it was the best and most complete rock album I had heard since Van Halen’s 1984, and the first good concept album since Pink Floyd’s The Wall. I bought a copy for myself that very day and listened to it almost exclusively throughout the summer of 2003.

I might have been late to the party since Songs for the Deaf was released in August of 2002, but better late than never. Since then, QOTSA has helped me through my parents’ divorce (Songs for the Deaf), homesickness and the general depression that results from a school year in Seattle (Lullabies to Paralyze), a serious motorcycle accident that nearly took my leg (Era Vulgaris), losing the love of my life (...Like Clockwork), and now, entering the twilight of my youth. Villains makes me feel young again, and might feature two of QOTSA’s best ever songs.

The record opens with the catchy single “Feet Don’t Fail Me,” and the sound shouldn’t surprise anyone who’s ever heard QOTSA before. It’s reminiscent of the stoner rock sound that propelled QOTSA’s popularity through the number-one, U.S. modern rock track “No One Knows.” With the exception of an 1980s, synth-sounding keyboard, “Feet Don’t Fail Me” sounds like a song from Songs for the Deaf, but that doesn’t mean QOTSA didn’t attempt to progress rock ‘n roll by blending genres.

Who knew blending swing and rock would work so well? Only Homme. The big band, swing song wrapped in rock ’n roll is one of the best songs QOTSA has ever cut and one of the best songs I’ve ever heard. My best friend from high school said it “feels like somebody strapped a rocket to my ass.” I saw my first QOTSA show with him, so every time they release a new record, we invariably rave about it for a month through text messages.

Side A of Villains concludes with another solid, trademark QOTSA song with a fat bass line. “Domesticated Animals” features the eerie guitar and vocals reminiscent of Era Vulgaris’s “I’m Designer,” but the funky guitar fills and synth keyboard adds an element that contributes to the song’s overall danceability -- which was something for which Homme and the band was striving with Villains, and achieved more often than not. Side A of Villains was the only thing that spun on my turntable over a 24-hour period. It might be one of the best A-sides ever.

“Fortress” kicks off Side B and is the only Villians song I could do without. “Head Like a Haunted House” picks up right where “Domesticated Animals” left off, though, providing another dance track thanks to some synth keyboard fills and old-fashioned, rock ‘n roll tempo.

QOTSA lets the new synth sound take center stage with “Un-Reborn Again” while preserving the traditional, bluesy sound of QOTSA’s past. Even some violins make their way onto the track. “Hideaway” continues the throwback, ’80s sound that’s so popular right now, and is the Villains song that best utilizes Homme’s voice.

Side C of Villains features “The Evil Has Landed,” where you won’t find any synth keyboard. It’s just old-fashioned QOTSA -- deep, fast bass and perfectly eerie electric guitar carrying the song to a crescendo to which you can’t help but dance. “The Evil Has Landed” is rock ‘n roll deep down to its core and does much to remind people that rock ‘n roll is a dance party genre -- impending death be damned. The music sounds like what the lyrics say: “Going on a living spree / Plenty wanna come with me / You don't wanna miss your chance / Near-life experience / Faces making noise / Say, be good girls and boys / It ain't half empty or full / You can break the glass, or drink it all / Dig it.”

Finally, “Villains Of Circumstance” brings Villains to a close in epic fashion. The lovely, six-minute love song is a fitting, semi-slow-dance ending to an album built on high-tempo, dance tracks with clap lines. It’s no “Another Love Song,” but that’s because QOTSA has evolved since 2002.

Here are my personal top 10 favorite QOTSA songs to provide further explanation as to why they are the best band of my generation, and why Villains is an indication that QOTSA is only getting better with age.

Queens of the Stone Age performs "The Way You Used To Do" at Reading + Leeds 2017. BBC Music
More in this category: « Same Agenda Moving Forward Regardless of Who is the President! The Responsible Party is…. Thanksgiving: The holiday for atheist socialists »
back to top