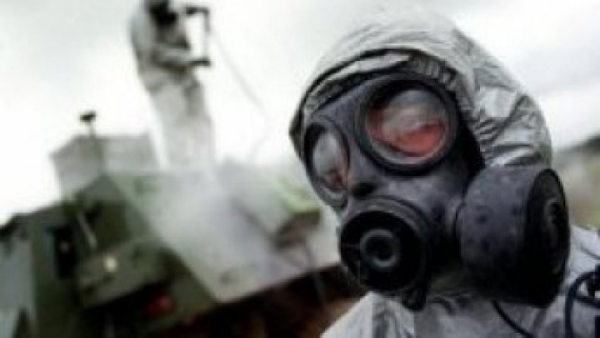 A recent chemical attack in northern Syria killed dozens and wounded more.  According to the Syrian Observatory for Human Rights (SOHR), victims were having difficulty breathing, foaming at the mouth, seizures, bleeding from the nose and mouth, fainting, and some progressed to losing consciousness and dying.  Based on these observances, sarin gas is suspected.

What is Sarin gas?

Sarin is a liquid that is clear, colorless, odorless and tasteless. It can also be vaporized and used as a gas in chemical warfare.  It is an extremely potent nerve agent.

What does Sarin do?

Sarin acts to inhibit cholinesterase.  To understand its effects, let me briefly break it down.

Cholinesterase is an enzyme in the body used to break down acetylcholine.

Acetylcholine is a neurotrasmitter, that is present in every synapse that bridges the nerve signals to the muscles and other nerves.

Cholinesterase is a “checks and balance” type enzyme that  prevents acetylcholine from building up and causing continual stimulation of muscles and nerves.

If  acetylcholine remains unchecked, continual stimulation of muscles and nerve fibers can occur, interfering with body processes and causing among many effects, inability to properly breath and ultimately death.

What are the symptoms of Sarin gas poisoning?

Within seconds of exposure, Sarin gas can cause a variety of symptoms.  These include:

Those who survive could have symptoms for weeks and sometimes long term neurological effects.

How does one get exposed to Sarin?

Sarin is man made.  Its an agent in liquid form that can be aerosolized.  It can be introduced to populations in food, water supply, by direct contact with the skin or  even inhaled.

How do we treat Sarin poisoning?

Firstly, we need to reduce exposure by immediately removing the clothing and washing off the body to reduce the amount of the chemical being absorbed.

Atropine is considered the antidote for nerve agent poisoning.  It acts by blocking acetylcholine receptor sites so the signals stop firing.

Pralidoxime is also used to help reactivate cholinesterase. It works by cleaving the bond made by the nerve agent/organophosphate and the cholinesterase so it is free to work again to control acetylcholine levels.

Both are given by injections and are available as autoinjectors.

Sarin was first developed as a pesticide during Nazi Germany in 1938 by Gerhard Schrader and his team.  The compound made was  found to be 500 times more deadly than cyanide.  So the chemical’s future of becoming a pesticide was thwarted because it couldn’t be used around humans.  Its been told that the team of scientists working on Sarin were incapacitated for a month.

The Nazis instead chose to develop it as a chemical warfare agent and named it Sarin after the scientists,  Schrader, Otto Ambros, Rüdiger and Hermann Van der Linde.  Fortunately it was never used during WWII.

However, in 1988 the Iraqi’s used it against the Kurds, killing 5000 and injuring tens of thousands more.  In 1995, the religious movement Aum Shinrykio released the gas on multiple subway trains in Tokyo, killing 12 and injuring thousands.

More in this category: « Dr. Joy Browne - Tribute Show - with Special Guest Host Michael Harrison from TALKERS.com 5 apps to make your move to the city easier »
back to top