Opinion: Trump doing more for Congressional Democrats than Sanders, Clinton ever could 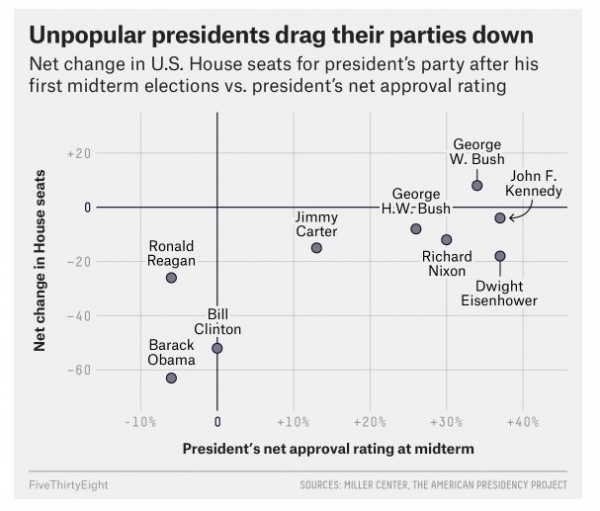 At some point Congressional Democrats have to start wondering if things could have turned out any better for them had they won the 2016 Presidential Election. I’ve already said once that it couldn’t be worse for Republicans, and except for the hundreds of judges Donald Trump is appointing all over the country, things are really going Democrats’ way. Congressional Democrats will reap the benefits of Trump’s record low approval rating and compulsive terrorizing of his own party members come the 2018 midterm elections.

When Trump said he would “drain the swamp,” I didn’t think he was talking about members of his own party. If that was his goal, it’s the only thing he’s done really well. Senate Majority Leader Mitch McConnell’s approval rating in Kentucky is 18 percent. He won’t be back, but a Democrat won’t take his seat either. That’s okay as long as Democrats preserve their seats most likely to switch parties (there are eight) and pick up at least three seats. The seats most likely to be within reach are in Nevada, Arizona or Texas.

The Democrats are going to gain seats in the House. Congressional minorities pick up seats when their opposition occupies the White House. 270ToWin has 14 seats as tossups, and every tossup Democrats win after the first will be a House seat gained.

So while there isn’t a direct correlation between negative net approval ratings of the President and the number of House seats lost, negative net approval ratings certainly result in House seats lost. And with 60 to 80 Republican-held House seats that could be competitive in 2018, and 209 Democratic challengers for House seats raising at least $5,000 by June 30 this year compared to the 28 Republicans who did so, Democrats are in position to surprise us like Trump did in 2016. The only thing that might stop them, according to history, is a terrorist attack.