Teaching Corrupt Politicians in Government to Fear the Consequence of Violating Law! 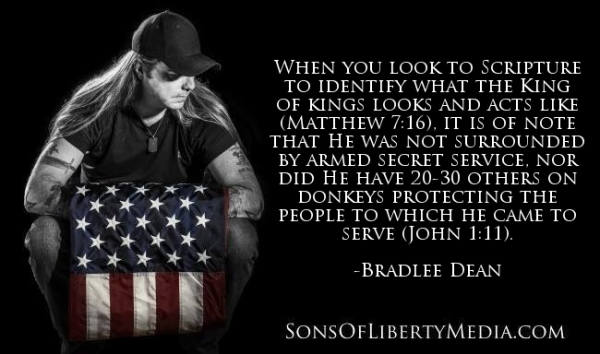 God grants liberty only to those who love it, and are always ready to guard and defend it. – Daniel Webster 1834

This past week, I received an email from a radio show listener in response to what President Donald Trump promised that he would do and what it is that he has actually done. This listener simply was telling me not to “bear false witness” with the President’s accomplishments, which in fact, have not been fulfilled.

I thought that Americans were raised to know that actions speak a lot louder than words (1 John 3:18).

If you remember right, President Donald Trump promised on the campaign trail to bring forth the “rule of law,” as well as promised to ask his Attorney General to appoint a special prosecutor to look into Hillary Clinton’s long list of crimes.

Donald Trump did say that, did he not? Why, yes he did!

However, immediately after winning the White House, he tells the American people that they owe Hillary Clinton a major debt of gratitude for her service to this country. That is the opposite of what he promised to do if he were to win office.

We continue to watch the crimes of the Clinton crime family come to the surface (Luke 12:2).

Mr. “It is going to be soooo easy” acts as if he does not have the power to enforce the law?

Now, the neutered President is acting as if he did not have the power to prosecute corruption when it comes to the Clintons, or any other corrupt politician. He recently stated:

“Hillary Clinton can illegally get the questions to the debate and delete 33,000 emails, but my son is being scorned by the Fake News media?”

Here is the kicker.  The second part of this email that was sent to me stated that secularist and radio show host Mark Levin said last week on his show that President Trump cannot force the DOJ to prosecute Hillary.

Isn’t it interesting that they want to believe that they can, at will, send your boys over to fight unconstitutional wars on their behalf, to clean out some “monstrous dictator” in some third world country who is filling the coffers of the military industrial complex, but the President cannot deal with corruption within? These actors are simply protecting their own, period!

I’m humored at the willful ignorance of the American people that forsake their own mercies (Jonah 2:4) by straining at the gnat and swallowing the big camel.

It reminds me of Marcus Cicero who said,

“Do not blame Caesar, blame the people of Rome who have rejoiced in their loss of freedom who hail him when he speaks in the Forum of more security, more living fatly at the expense of the industrious.”

“If ye love wealth greater than liberty, the tranquility of servitude greater than the animating contest for freedom, go home from us in peace. We seek not your counsel, nor your arms. Crouch down and lick the hand that feeds you. May your chains set lightly upon you; and may posterity forget that ye were our countrymen.” – Samuel Adams

The President, Vice President and ALL civil Officers of the United States, shall be removed from Office on Impeachment for, and Conviction of, Treason, Bribery, or other high Crimes and Misdemeanors.

Or maybe Mark Levin didn’t take the time to seek out the definition of the word treason?

TREASON is the highest crime of a civil nature of which a man can be guilty. Its signification is different in different countries. In general, it is the offense of attempting to overthrow the government of the state to which the offender owes allegiance, or of betraying the state into the hands of a foreign power. -Webster’s 1828 Dictionary

When you look again to the founding documents, namely the Constitution, you will find that treason is a highlighted crime.

Treason against the United States, shall consist only in levying War against them, or in adhering to their Enemies, giving them Aid and Comfort.

Some might say that the good thing is, we still have Trey Gowdy, Jason Chaffetz and Daryl Issa!

They are doing such a good job prosecuting corruption within their own ranks that we still have Harry Reid, Barrack Hussein Obama, Eric Holder, Diane Feinstein, Loretta Lynch, Maxine Waters, Susan Rice, Debbie Wasserman Schultz, Huma Abedin, Hillary Clinton and list goes on and on and on and on (Exodus 23:8).

The definition of insanity is doing the same things over and over again expecting to reap a different result (Galatians 6:7).

Don’t forget that the likes of Mark Levin, Glenn Beck, Rush Limbaugh, etc. feed the unconstitutional narrative of the liberals vs. conservatives, left vs. the right, the Democrats vs. Republicans.  The way they get away with this and hang on to their jobs is to simply omit reference to God, His moral Law and the Constitution of the United States (Mark 3:25).

Instead of taking responsibility and educating the American people, they simply play the self-elevated professors of Herod’s corrupt governmental indoctrination (Mark 8:15).

They are simply getting you to ask the wrong questions without giving you the right answers, making void the commandments of God through the tradition of carnal and reprobate men (Mark 7:13).

Maybe those who have not taken the time to look to history need to start looking and understanding that Republics (Rule of Law not of men or of the opinions of men) have been destroyed for the lack of impeachment and consequence within when it comes to representatives in their governments.

Do not separate text from historical background. If you do, you will have perverted and subverted the Constitution, which can only end in a distorted, bastardized form of illegitimate government. – James Madison

With that said, how did our Forefathers deal with corruption within?

Benedict Arnold was thought to be a patriot.  Yet, when exposed, he was found to be a man that committed high treason against his own country.

In July 1780, Arnold sought and obtained command of the fort at West Point. He had already begun a year-long correspondence with General Henry Clinton (of all the names) in New York through Major Andre and was closely involved with Beverley Robinson, a prominent loyalist (Loyal to the British crown) in command of a loyalist regiment. Arnold offered to hand the fort over to the British for close to $3 million dollars in 2017 dollars and a brigadier’s commission.

He chose West Point for its strategic importance. The Americans had been using its position to prevent British ships from moving Northward from New York City up the Hudson and connecting British forces in Canada-a move that would have split the north from the south. His plans were thwarted when Andre was captured September 23, 1780 with a pass signed by Arnold. Andre was carrying documents that disclosed the plot and which incriminated Arnold.  Andre was later hanged as a spy.

America, do as The Lord commands!

“Hate the evil, and love the good, and establish judgment in the gate:” -Amos 5:15

If Americans truly want their country back, they are going to have to teach evil people to fear the consequences of their actions!

More in this category: « GenCon Celebrates its 50th Birthday Opinion: The un-Americanism of Neo-Nazism and white supremacy »
back to top