Eating too FAST makes you FAT

Fast food has become the staple of many American and European diets and we’ve seen obesity rise.  True more people take public or private transportation to work over walking, and many have given up smoking every time they had a hunger itch, but the most popular reason for our waistline increase is fast food. But is it the caloric content of the fast food that’s fueling the obesity epidemic, or the speed at which its ingested?

What is Fast Food?

According to the Merriam-Webster dictionary, Fast Food is “food that can be prepared and served quickly”.  A burger, shake and fries is considered fast food but so is a take away salad or sandwich.  It’s implied that fast food is a meal that is not made fresh but made previously and preserved such that it can taste fresh when needed to be served.

How Caloric is Fast Food?

According to CalorieKing, a McDonald’s Big Mac is 540 calories.  A large order of fries is 510 calories.  So a meal over 1000 calories is obviously not the healthiest choice.

But let’s return back to the sandwich alone. While a Big Mac is 540 calories, CalorieKing finds Chick-Fil-A’s Cobb Salad (without dressing) 500 calories.  Bob Evans Restaurant’s Cobb Salad is 516 calories. 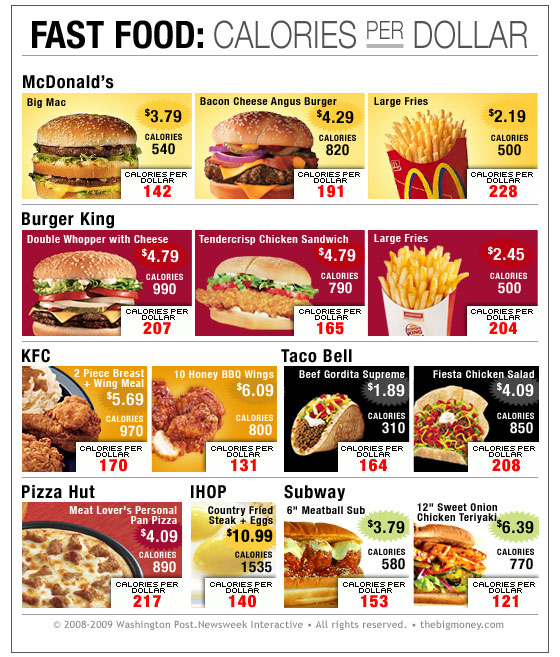 So are we becoming obese eating cobb salads and tuna salad for lunch just as one would eat a Big Mac?  We don’t know since people don’t study cobb and tuna salad eating consumers. My guess is no.

Are we eating too fast?

Yes, and so fast that I believe it could be messing with our metabolism.

Think back to caveman days.  We had to chew.  And not on a soft sesame seed bun, but chew our meat.  Nuts and vegetables took a chewing as well.  Food was more scarce so it was savored and meals weren’t on the run while on a subway or at a stop light in one’s car.

Previous studies have shown that eating slowly and chewing it multiple times allow the body’s signals to trigger the satiety sensation sooner, hence one would eat less.

So gulping down a burger in 5 bites could be accomplished prior to the brain receiving the signal that it should be satisfied.

When a body senses that the food source is short-lived, unpredictable, and coming at a speed preventing proper absorption of nutrients, it may slow down metabolism to allow the body to make the most of what it has.  Eating a meal slow and methodical may be the most successful way to not only feel full but to eat less and lose weight.

I suggest a study be done looking at two groups of people eating the same food with the same caloric content but differing on the speed at which they eat it.

I suggest to you all to take an extra 15 minutes to complete your meal than what you’re accustomed to and determine if you see results after a few weeks.

Of course avoiding fast food would be the most beneficial for our weight but if you must eat fast food, eat it slowly.

More in this category: « The 5 best places to keep your money Global Blindness Expected to Triple by 2050 »
back to top