Who's the Real Jackass? 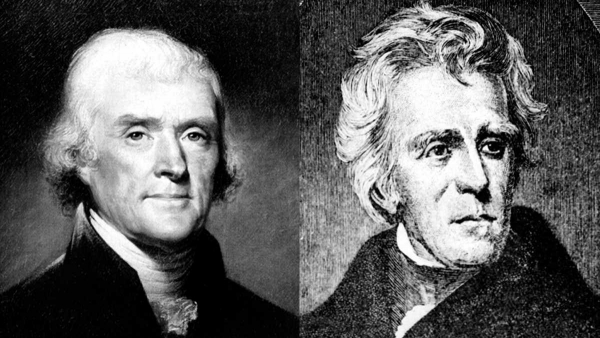 I don’t know about you, but I have always loved to read and study Louisiana History.  I’ve had the pleasure of teaching the history of the Bayou State at both Tulane University and LSU. And when it comes to examining the giant political figures that had a direct bearing on the stature and even the survival of Louisiana as an American state, two individuals stand head and shoulders above all others.

They each are former presidents. And without their vision and dramatic leadership, Louisiana might well not be an American state today. No one else could fill this role more than Thomas Jefferson and Andrew Jackson.

Jefferson was the nation’s third president, and could well be the brightest intellect that ever graced our country's political scene. He was the author of America’s founding document, the Declaration of Independence, and he became the voice for the hopes and aspirations of a new America. Jefferson founded the University of Virginia, and he designed and built Monticello, one of the most stunning antebellum homes in the country.  And he was the driving force in negotiating the Louisiana Purchase from Napoleon in 1803.  Simply put, without Jefferson’s vision and tenacity in seeking the vast territory west of the Mississippi River, Louisiana would not be a state today.

Andrew Jackson was our country's seventh president, and was the only president to have been a prisoner of war, having been captured by the British at 17 while serving in the Revolutionary War. He later was Nicknamed “Old Hickory” for his legendary toughness on the battlefield.  During his presidential campaign in 1828, his opponents called him a jackass. Jackson was amused and used the image to win the presidency. He founded the Democratic Party and used the jackass as its symbol.

But what Andrew Jackson did for Louisiana was incredible. In the war of 1812, New Orleans was under siege by the British. Major General Andrew Jackson rushed to New Orleans and gathered a rag tag army made up of a motley group of local citizens, frontiersmen, slaves, Indians and even pirates.  And he was eager to fight the British, telling his wife: “I owe to Britain a debt of retaliatory vengeance, and should our forces meet I trust I shall pay the debt.”

Louisiana should regularly thank its lucky stars for Jackson’s tenacity to get his revenge.  He soundly beat the British at the Battle for New Orleans, became an American hero, and saved Louisiana from becoming a permanent British protectorate.

If ever there were any two individuals who should be regularly honored and commemorated in Louisiana history, there should be doubt the two should be Thomas Jefferson and Andrew Jackson. And for many years, the Louisiana Democratic Party did honor both American heroes by hosting an annual Jefferson-Jackson dinner as a yearly fundraiser. Democrats held similar events across the country.

But no more in Louisiana. Party officials have decide it is no longer “politically correct” to honor these two American icons. You see, they were slave owners. It made no difference that the first seven American presidents also owned slaves, as did most of the nation’s founding fathers. The democratic leadership apparently wants to judge these past heroes based on present-day values, and continue a warped effort to re-write Louisiana and American history.

The new dinner name is the “True Blue Gala.”  I suppose we will see a resolution at the dinner calling for the re-naming of Jefferson and Jackson parishes, Thomas Jefferson High School in Gretna, the town of Jackson, La., Jefferson Island in Iberia Parish; the list goes on and on.

The Louisiana Democratic Party is becoming more and more irrelevant in the Bayou State. And Jackson’s symbol for the Democrat Party would seem to have a different connotation today. The real jackasses are those ingrates who try to rewrite history and belittle past leaders who served and saved our nation, and particularly Louisiana. The party of Jefferson and Jackson deserve a lot better.

Jim Brown’s syndicated column appears each week in numerous newspapers throughout the nation and on websites worldwide.  You can read all his past columns and see continuing updates at http://www.jimbrownusa.com.  You can also hear Jim’s nationally syndicated radio show, Common Sense, each Sunday morning from 9:00 am till 11:00 am Central Time on the Genesis Communication Network.

More in this category: « Heroes, Cops and Kids: The best superhero story you will hear all week Senator John McCain Diagnosed with Brain Tumor »
back to top