President Trump Impeached. So ... now what? 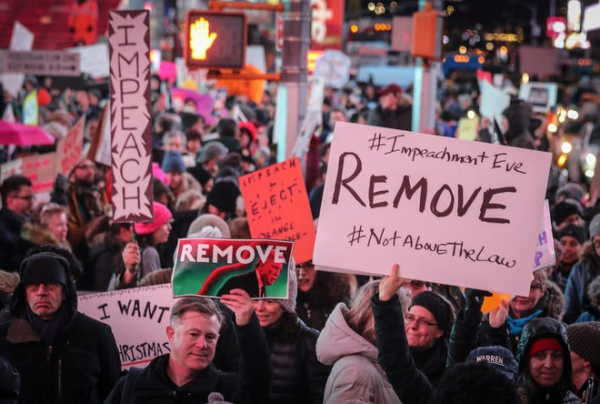 As you no doubt have heard by now, President Donald Trump has been impeached by Congress. This is only the third time in the history of the country where a sitting President has been impeached. The first was way back in 1868 when President Andrew Johnson was impeached after the Civil War as the nation struggled with reunification. The second time was President Bill Clinton, who was impeached for lying to Congress about a sexual relationship he had with White House intern Monica Lewinsky. Both Presidents were acquitted as neither received the two-thirds Senate vote to remove them from office. President Nixon resigned before the impeachment moved forward and was fully pardoned by President Ford.

And now President Trump has joined the Impeached Club for:

The vote in Congress went as much as you would expect, along party lines.  The abuse of power article passed 230-197, the Obstruction of Congress article passed 229-198. Hawaii Rep. Tulsi Gabbard (D) voted “Present” in each case, which is neither a “yes” or “no.”

So … now what happens?

Not much for the time being. President Trump is still the sitting President. Speaker Pelosi will, eventually send the two articles of impeachment to the Senate who will then hear a trial (or maybe they won’t) and vote to remove the President from office.

But, Pelosi hasn’t quite sent the articles to the Senate floor yet. She’s holding out, some believe, in order to get Majority Leader Mitch McConnell to agree to hold a Senate trial as opposed to simply vote against the articles of impeachment without further investigation or trial, which Republicans have already threatened to do.

The problem is that key witnesses refused subpoenas to testify before Congress. This … is a bit awkward. By comparison, when the Republican Congress sent out subpoenas to former Clinton advisor Susan McDougal to testify at the Whitewater hearing, she refused. And so Republicans threw her in jail for a year and a half. Today, several White House aides, lawyers, and even the acting chief of staff have ignored their subpoenas to testify before Congress in the Trump impeachment hearing. None of them went to jail. But maybe they should have. In fact, President Trump ordered some of them to ignore the subpoena, which is why Congress also added the Obstruction of Congress impeachment article. I mean, if Congress orders you to testify and you just, you know - refuse to show up, that’s pretty much the exact definition of “Obstruction of Congress.” Hard to argue with.

Eventually, the articles of impeachment will get to the Senate and President Trump could be, but will probably not be removed from office. Democrats claim he is corrupt and was trying to get a foreign power to interfere in the 2020 election. Republicans say he’s a man of God and was only trying to fight corruption by speaking with Ukraine about the Biden scandal.

All I know is this, do you know that only one week ago President Trump was fined $2 million dollars for, get this - stealing from Charity!

If Trump were indeed a “man of God,” who wants to fight corruption at every turn then … um, well, he probably wouldn't be stealing money from charity and using it to pay for things like, a $12,000 autographed football helmet (which he kept), a $20,000 portrait of himself, paying off his legal debt. Trump actually spent more than $250,000 of money he raised for charity - to settle lawsuits involving his for profit business. That doesn’t even count his 2016 veterans fundraiser where he raised millions for vets and just .. you know, kept most of it to spend on his Presidential campaign. Which is what led to the actual New York State lawsuit against him and the $2 million fine he has been ordered to be distributed amongst eight charities Trump’s foundation swindled money from.

Not only that, the Judge found the foundation to be so corrupt, he ordered the entire Trump Charity Foundation to liquidate, worth about $1.7 million, and also give that money - to the charities Trump swindled money out of. In conclusion, Donald Trump's charity, which raises money for charity, takes the vast majority of that money for personal use and business gain. This is grossly illegal. After the liquidation the Trump Foundation was ordered to pay out (and it quietly did so) approx $400,000 to each of the following charities, listed alphabetically:

The Army Emergency Relief, the Children’s Aid Society, Citymeals on Wheels, Give an Hour, Martha’s Table, the United Negro College Fund, the United Way of the National Capital Area, and the United States Holocaust Memorial Museum.

More in this category: « What we’re STILL thankful for this year U.S. drone strike, targets Iran. Now, what? »
back to top