The standalone Han Solo film was turning into a screwball comedy, so Disney fired the directors 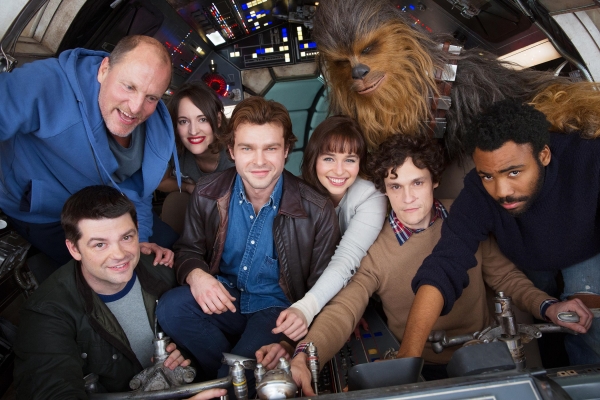 Phil Lord and Chris Miller, the duo directors behind The Lego Movie and the Jump Street film (revival) have been removed from production of the Untitled Star Wars Han Solo film after seventeen weeks of principle photography. Seventeen weeks!  With only five weeks left of shooting, production shut down until replacement director, Ron Howard, stepped in to pick up the pieces.

According to the Hollywood Reporter:

“Several sources close to the movie and others close to the directors tell EW that ever since filming began back in February, Lord and Miller, who are known primarily for wry, self-referential comedies like 21 Jump Street and the pilot episodes for Brooklyn Nine-Nine and Last Man on Earth, began steering the Han Solo movie more into the genre of laughs than space fantasy.

Okay. Fair enough. I see the potential for disaster there. Another issue was that Lord and Miller have been known to allow significant improvisation on the set of their previous films. Which is precisely what they did on this set, too! Super screenwriter and Star Wars royalty Lawrence Kasdan (writer - Empire Strikes Back, Return of the Jedi, The Force Awakens and the Untitled Han Solo Film), was none too pleased at the dailies coming back from set. The entire story line, it seemed, had been significantly derailed, due to the improvisational direction that Lord and Miller had taken.

Writer / Executive Producer Kasdan stepped in with a, “Stick to the script” note. A note, apparently, the directors thought was just a suggestion. Lord and Miller ignored the note. Finally, Kathleen Kennedy, president of Lucasfilm Ltd., fired Lord and Miller after seventeen weeks of filming.  Seventeen weeks!

You keep saying “seventeen weeks” as if that’s significant. What’s up with that?

Seems suspicious. Or, as Bill and Ted would say, “Strange things are afoot at the Circle-K!”

Strange things indeed. The only other (potential) negative rumor coming out of the Han Solo film camp was that lead actor, Alden Ehrenreich (young Han Solo), didn’t have the acting chops they at first thought. According to the popular online movie news source The Wrap:

"Matters were coming to a head in May as the production moved from London to the Canary Islands. Lucasfilm replaced editor Chris Dickens (Macbeth) with Oscar-winner Pietro Scalia, a veteran of Ridley Scott films including Alien: Covenant and The Martian. And, not entirely satisfied with the performance that the directors were eliciting from Rules Don't Apply star Alden Ehrenreich, Lucasfilm decided to bring in an acting coach. Lord and Miller suggested writer-director Maggie Kiley, who worked with them on 21 Jump Street."

As has been pointed out by many sources, adding an acting coach is not unusual. But acting coaches are usually on set from day one and/or brought on by the actor themselves. Some actors have worked with the same acting coach for years, or decades, and work with them on set. But it’s certainly unusual to bring an acting coach in so late into production.

So, while it appears there were difficulties behind the scenes, even that is nothing new. If you’ve ever worked on set you know that making movies is controlled chaos, at best. There are no mystical properties that a director possesses. Directing is paperwork, organization, collaboration and making choices. In fact, the only solo choice a director adds to the production without collaboration from anyone else is tone. The tone of movie is decided by the director. Unless, of course, you work for Disney. Or Lucasfilm Ltd. In which case they will fire your ass if you change the tone of their films. Just sayin.

And now we have little Ronnie Howard piloting the fate of young Han Solo. How much of the original footage Howard will be able to use is unknown. It would probably be too expensive to reshoot the majority of the film. Besides, these tent pole flagship movies have marketed release dates to keep! It’s true that all huge films like this have time and money budgeted for the inevitable reshoots but this situation is unprecedented.

Unlike the Zack Snyder/Joss Whedon switch up on the Justice League film, Whedon is going in to finish up the film and do his best to match the style and tone of Snyder (because the film was ninety percent done). Whedon was not hired to rethink the entire movie and significantly restructure the picture.

Ron Howard will have to make due with a lot of footage that Lord and Miller produced, and he probably won’t get any extended amount of time to complete the picture. It should make for an interesting challenge. And hopefully, an interesting movie.

So, I'm sorry, Mr. Howard, but you will probably have to make due with what time is left for production. But in Hollywood, much as on Broadway, as they say -- the show must go on.

NOTE: This story is developing and will be updated with new information as it becomes available.

More in this category: « Every fan's reason for hope at the MLB Trade Deadline Take a vinyl vacation every once in awhile »
back to top