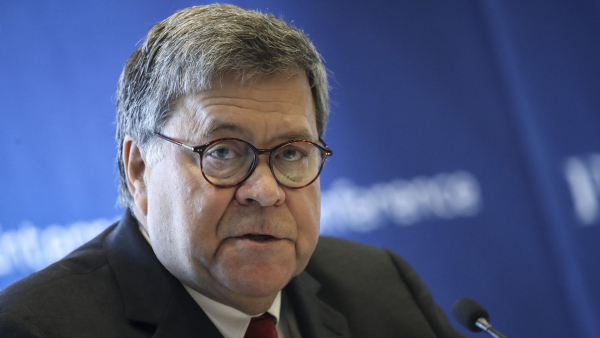 United States Attorney General Bill Barr recently spoke at Notre Dame University.  Last week I quoted from the first half of that speech.  Today, from the second half.  I add no commentary because he says it all so well:

“The call comes for more and more social programs to deal with the wreckage.  While we think we are solving problems, we are underwriting them.

“Interestingly, this idea of the State as the alleviator of bad consequences has given rise to a new moral system that goes hand-in-hand with the secularization of society.  It can be called the system of “macro-morality.”  It is in some ways an inversion of Christian morality.

“Christianity teaches a micro-morality.  We transform the world by focusing on our own personal morality and transformation.

“The new secular religion teaches macro-morality.  One’s morality is not gauged by their private conduct, but rather on their commitment to political causes and collective action to address social problems.

“This system allows us to not worry so much about the strictures on our private lives, while we find salvation on the picket-line.  We can signal our finely-tuned moral sensibilities by demonstrating for this cause or that.

“Something happened recently that crystalized the difference between these moral systems.  I was attending Mass at a parish I did not usually go to in Washington, D.C.  At the end of the Mass, the Chairman of the Social Justice Committee got up to give his report to the parish.  He pointed to the growing homeless problem in D.C. and explained that more mobile soup kitchens were needed to feed them.

“This being a Catholic church, I expected him to call for volunteers to go out and provide this need.  Instead, he recounted all the visits that the Committee had made to the D.C. government to lobby for higher taxes and more spending to fund mobile soup kitchen.

“A third phenomenon … is the way law is being used as a battering ram to break down traditional moral values and to establish moral relativism as a new orthodoxy.

“First, either through legislation but more frequently through judicial interpretation, secularists have been continually seeking to eliminate laws that reflect traditional moral norms.

“More recently, we have seen the law used aggressively to force religious people and entities to subscribe to practices and policies that are antithetical to their faith.

“[M]ilitant secularists today do not have a live and let live spirit – they are not content to leave religious people alone to practice their faith.  Instead, they seem to take a delight in compelling people to violate their conscience.

“For example, the last Administration sought to force religious employers, including Catholic religious orders, to violate their sincerely held religious views by funding contraceptive and abortifacient coverage in their health plans.

“This refusal to accommodate the free exercise of religion is relatively recent.  Just 25 years ago, there was broad consensus in our society that our laws should accommodate religious belief.

“Ground zero for these attacks on religion are the schools.

“The first front relates to the content of public school curriculum.  Many states are adopting curriculum that is incompatible with traditional religious principles according to which parents are attempting to raise their children.  They often do so without any opt out for religious families … [or] even warn[ing] parents about the lessons they plan to teach on controversial subjects relating to sexual behavior and relationships.

“A second axis of attack in the realm of education are state policies designed to starve religious schools of generally-available funds and encouraging students to choose secular options.  [Cites Montana action based on anti-Catholic Blaine provision in its constitution.]

“A third kind of assault on religious freedom in education have been recent efforts to use state laws to force religious schools to adhere to secular orthodoxy.  [Cites suit to force Catholic schools to employ teachers in same-sex marriages.]

“[A]s long as I am Attorney General, the Department of Justice will … fight for the most cherished of our liberties: the freedom to live according to our faith.”

More in this category: « Nationals' fans weren't booing the President ...they were booing us! What if buying health care was like buying peanut butter? »
back to top