The Founding Forefathers Meant to Unite by Dividing 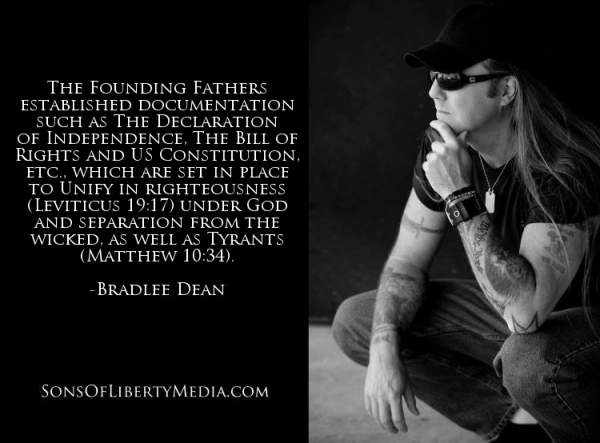 “Sad will be the day when the American people forget their traditions and their history, and no longer remember that the country they love, the institutions they cherish, and the freedom they hope to preserve, were born from the throes of armed resistance to tyranny, and nursed in the rugged arms of fearless men." -Roger Sherman, signer of the Declaration of Independence

The Founding Fathers established documentation such as The Declaration of Independence, The Bill of Rights and US Constitution, etc., which are set in place to Unify in righteousness (Leviticus 19:17) under God and separation from the wicked, as well as Tyrants (Matthew 10:34).

“Our constitution was made for a moral people and a religious people (Under the Christian umbrella). It is wholly inadequate to the government of any other.” –President John Adams

Study the Constitution. Let it be preached from the pulpit, proclaimed in legislatures, and enforced in courts of justice. – President Abraham Lincoln

We know that history teaches us the lessons that many want to learn so that history does not repeat itself.  On the other hand, there are those who could care less about the lessons that need to be learned. I am now addressing those who do not want to see the evils of the past repeated in the present. After all, prevention is better than cure.

In this country, our forefathers, under God, have given to their posterity, the American people, the privilege of being the government. Remember what President Abraham Lincoln said:

Of course, he took from John Wycliffe who said:

“This Bible is for the government of the people, by the people and for the people.”

The Declaration of Independence, which our forefathers have handed to the past, present and future generations, reads:

“That to secure these (God given) Rights, Governments are instituted among men, deriving their just powers from the consent of the governed, that whenever and Form of Government becomes destructive of these ends, it is the Right of the people to alter or abolish it, and to institute new Government” (Exodus 20; Amos 3:3; 2 Corinthians 6:14-19; James 4:4).

Then, we look to the preamble of the US Constitution to find “We the People (Are the government) of the United States, in Order to form a more perfect Union (All 50 states), establish Justice (According to God’s moral Law), insure domestic Tranquility...”

The Framers had good reason to seek to “insure” domestic tranquility. Literally “domestic tranquility” means peace and quiet at home—at home in America, as opposed to in other nations. Tranquility for the Framers meant the absence of riots, rebellions, and similar symptoms of social disorder.

The Constitution continues, “…provide for the common defense, promote the general Welfare (The concern of the government for the morality, peace and safety of its citizens. Providing for the welfare of the general public is a basic goal of government.), and secure the Blessings of Liberty to ourselves and our Posterity (family lineage), do ordain and establish this Constitution for the United States of America.”

Suppose a nation in some distant region should take the Bible for their only law book, and every member should regulate his conduct by the precepts there exhibited! Every member would be obliged in conscience, to temperance, frugality, and industry; to justice, kindness, and charity towards his fellow men; and to piety, love and reverence toward Almighty God...What a Utopia, what a Paradise would this region be. –John Adams wrote in his diary entry dated February 22, 1756