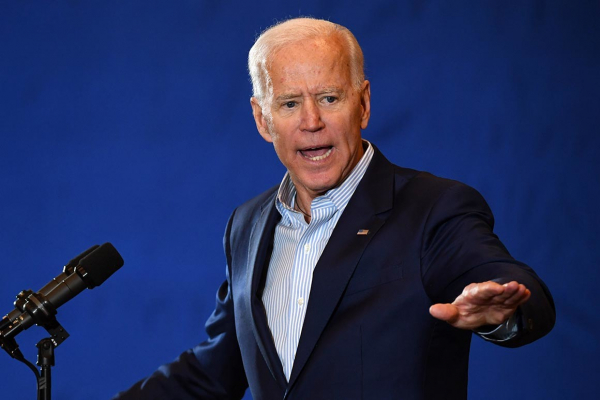 CNN has released a new poll about the Democratic candidates and it revealed a huge increase in Biden support and a huge drop in interest in Harris. The Biden rise does not exactly surprise me, the Harris decline surprise me a bit. But whatever. There are still something like eighteen candidates in the race, pretty soon some of them are going to be dropping like flies.

Anyway, Biden is clearly viewed as the most moderate candidate. I know there was some recent progressive pushback against his “inappropriate touching” but any common sense analysis of said videos of Biden “inappropriately touching women” revealed them to be ridiculously harmless. And in some cases the women who were on the receiving end of a Biden hug have come out and said things like, “Ummm … he’s my close friend of 40 of years. Of course it’s okay for him to hug me!”

But while it turned out to be a nonstory, I think the negative coverage of Biden dropped him in the polls a bit. And … well … I also hate to say this but his pretty bad performance in the first debate didn’t help him. But all that seems to be water under the bridge now and moderate American’s are reminding themselves how much they like Biden. Conservatives even kind of liked him in the same way that liberals kind of liked Senator McCain. That seems to be changing though as Biden is the front runner and now FOXNEWS is running attack ad after attack add on Biden’s health - which, to be honest - looks just fine.

So - does that mean Biden is about to be our new President? Well - not so fast. This all comes from a single CNN poll of 1.001 people with a sampling error of 3.7%.  I know some folks are skeptical of polls but all you need to do is remind yourself is that a poll is a snapshot of voters, it is not a forecast of the future. BUT, even though it’s true that people can change their mind as in “Someone polls for Biden one day but changes their mind the following week to support Sanders,” and it’s true that this does happen. People change their minds. That being said, snapshots of voters are surprisingly accurate.

I’ll bring Scientific American into the mix of things. According to their 2004 article, “How can a poll of only 1,004 Americans represent 260 million people with only a 3 percent margin of error?” - polls have a margin of error that depends:

Well, it sounds like that’s true - up to a certain point. While it’s true that the more people you poll the smaller your margin of error becomes. Again, from Scientific America:

“... by surveying 4,000 people, you can get the margin of error down to 1.5 percent … but that is generally a waste of time because public opinion varies enough from day to day that it is meaningless to attempt too precise an estimate.”

Okay. Fair enough. It sounds like it would take too much time to gather polling data from several thousand people because by the time you compile the data, public opinion may have significantly altered. So it sounds like polling folks in the several thousand range - isn’t worth it at all. Which is why pollsters find the sweet spot to be about “a thousand people,” which puts the margin of error at 3.7% but can be done quickly and in enough time that public opinion hasn’t changed much by the time the poll is released.

Makes sense to me.

Well, Scientific American covers that too:

“The margin of error is a mathematical abstraction, and there are a number of reasons why actual errors in surveys are larger. Even with random sampling, people in the population have unequal probabilities of inclusion in the survey. For instance, if you don't have a telephone, you won't be in the survey, but if you have two phone lines, you have two chances to be included. In addition, women, whites, older people and college-educated people are more likely to participate in surveys. Polling organizations correct for these nonresponse biases by adjusting the sample to match the population, but such adjustments can never be perfect because they only correct for known biases. For example, "surly people" are less likely to respond to a survey, but we don't know how many surly people are in the population or how this would bias polling results.”

Okay. I think I got it - a poll is a snapshot of voter opinion but again - it is not an actual prediction of exactly what will happen. A 3 percent margin of error means that “there is a 95 percent chance that the survey result will be within 3 percent of the population value.”

What that means is that pollsters, much like weathermen are better at their jobs than we give them credit for. I mean we have plenty of jokes about both are wrong all the time (especially the weatherman), the opposite is true - polls (and the weatherman) for the most part -  are pretty accurate.

But anomalies do exist, errors happen. I mean, polls predicting the likely outcome of the 2016 Presidential election could have one candidate ten points ahead one week, and then watch that candidate lose mainly due to Widespread Russian Interference in all 50 States which rendered all the polls meaningless - and handing the election to the other candidate.

More in this category: « Big Tech may not be considering unintended consequences of government regulation All about that weird Ukrainian Whistleblower story! »
back to top