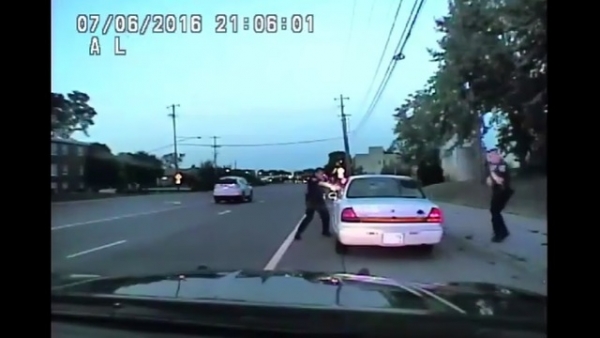 A couple of days after former police officer Jeronimo Yanez was acquitted in the killing of Philando Castile, authorities released dashcam footage of the shooting.

The video is as sad and shocking as you might expect. At about the one minute mark what appeared to be a routine stop turns explosive and begins with the following exchange:

The officer explains to Mr. Castile that he was pulled over because of a broken brake light. This is true but Yanez also pulled the car over because Mr. Castile, “fit the physical description of an armed robbery suspect from the previous week,” which is more fully explained in the aftermath transcript.

Then, from the video:

Officer Jeronimo Yanez: Do you have a license and insurance?

A few seconds go by as Yanez waits. Philando hands something out of the car to officer Yanez, presumably, either Mr. Castile’s license or proof of insurance (or both). The officer takes what is handed to him and glances at it for a few seconds. Then -- it’s hard to tell but -- it looks like the officer keeps the item in his hand or maybe, tucks into a uniform pocket. Then:

Philando Castile:  (calm voice) I have to tell you, I have a, I have a firearm on me.

At this point Philando, his girlfriend Diamond Reynolds, who is in the passenger seat, and Yanez all start talking and eventually shouting over each other. Over the course of four seconds -- it sounds as if Philando is saying, “I’m not reaching for it,” Diamond says, “He’s not reaching for it” while officer Yanez says, “don’t reach for it -- don’t pull it out.” Then Yanez reaches into the car with his left hand -- for some reason (but it does fit the narrative that Yanez is trying to prevent Phialdo from grabbing -- something). Finally, Philando’s girlfriend yells, “No!”

That’s when Yanez pulls his gun with his right hand and fires several shots into the car hitting Philando five times and killing him almost instantly. About forty seconds later, Diamond uses her cell phone to live streams the aftermath of the shooting. The terrifying video goes viral.

What really shocks me is how fast the fatal shooting escalates. One second they were calmly discussing “license and insurance” up to and including the first exchange of “I have a gun” and “Okay, don’t reach for it then.”  All of that was reasonable and polite. Several seconds later, Yanez fires into the car.

Life or death. In the matter of four seconds.

Now, I can’t imagine being a police officer and having to make these kind of  decisions -- usually within the span of a few seconds. But, and this is equally as important, I also can’t imagine what it is like to be a black man in America, so, there’s that.

That being said, in this instance, it’s pretty clear officer Yanez panics -- and I mean, seriously panics. Yanez lost his job and many feel he should have been criminally charged.

Of course, the jury didn’t see it that way. The jury did not believe there was proof beyond reasonable doubt of manslaughter. I have not read the full court transcript nor seen all the evidence one way or another so I won’t speculate further on their reasoning.

I thought watching the dashcam video would show me clear cut evidence; evidence beyond reasonable doubt that Yanez murdered Philando. And then I watched it. And now I have doubts. Which is fine! Not that I was on the jury but keep in mind, prosecutors don’t have to prove a crime beyond all possible doubt! They need to prove a crime beyond reasonable doubt. What that means is that you, as a member of the jury can have some doubt and still apply a guilty verdict.

When I watch the dashcam video it’s pretty clear Yanez fears for his life and it does create a bit of reasonable doubt, which, I suspect is what the mostly white jury focused their acquittal on. I mean, to be honest, we can’t see if Philando is reaching for his gun (or not). We don’t know why Yanez reached into the car with his left hand.  But the full video is ten minutes long and continues several minutes after the shooting, during which Yanez is completely non functional from fear and (probably) adrenalin. Which, again, creates doubt.

We would love to think we knew what happened. But we just don’t. Not really.

I think the main question in my mind is -- should officer Yanez have been so scared? Is it reasonable for Yanez to assume Philando was reaching for a gun and therefor the officer had no choice but to shoot Mr. Castile? Or is it more reasonable to assume Yanez fell victim to “fear the black man” racial profiling and then needlessly panics and kills Philando?

At the trial, Use-of-force experts weigh in on the matter. Emanuel Kapelsohn, a firearms trainer and consultant called by the defense to testify, said:

"We can't expect, and the law doesn't expect, police officers to be perfect.

If we established a standard of perfection, we'd have very few, if any, people who could meet that standard to become police officers. Instead, what the law requires is that the police officers act reasonably, and that they use what is called objectively reasonable force.

And obviously the jury here, after four and a half days of deliberation, decided that the force used by Officer Yanez was objectively reasonable when he saw Mr. Castile pulling a gun out of his pocket."

Okay. Fair enough. Michael Quinn, a retired police sergeant and training officer for the MPLS department responds to that with,

"I think it's really difficult for a citizen to put themselves in the shoes of a reasonable officer at the scene of a scenario like this. And I think I understand why they came back with a not-guilty [verdict] after viewing the video.

Not being police officers, not being put in that situation themselves — they don't have to do that. They can say, 'Whoa. That would have scared me too. Because if he's reaching down and he's already said he's got a gun, I would have a right to be afraid.'

A reasonable officer I think would have acted differently — and at least would have given Philando a chance to explain, to do something different other than what happened."

Officer Quinn, I agree with you. There was a reasonable scenario here where Philando Castile should have lived.

More in this category: « How the Timberwolves can get Jimmy Butler and a center in the NBA Draft Opinion: Republicans’ support of the rich shines through in Senate healthcare bill »
back to top