A Louisiana Kid and the Berlin Wall 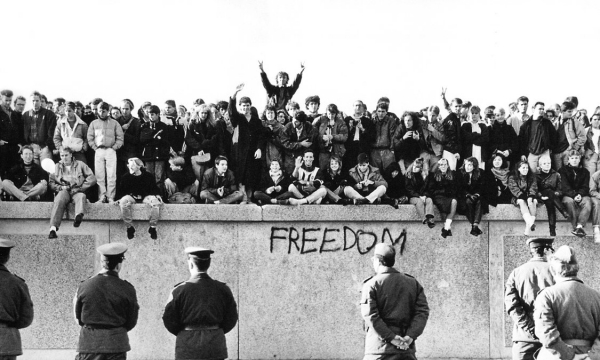 Thirty-one years ago this week, President Ronald Reagan traveled to West Berlin, and at the Brandenburg Gate admonished: “Mr.Gorbachev take down that wall.” The Berlin Wall had been erected by the puppet soviet state of East Germany. Unless you are over sixty five or are a history buff, you may not understand the tensions that existed then had many observers feeling that we could be on the brink of war with the Soviet Union.

The wall was initially a 25-mile long barbed wire fence. In the months that followed, the “wire wall” became concrete with guards aloft who shot anyone trying to climb the wall, and make their way into West Berlin.  For the next 26 years, German citizens were not allowed to cross the wall. Americans could enter into East Berlin at “Checkpoint Charlie,” only if they could establish some business purpose for crossing the border.

At the time, I was a politically naïve graduate student at Cambridge University in England. I had the privilege of being a member of the U.S. Track Team competing in track meets throughout Europe. A meet promoter approached me to compete at a major competition in East Berlin. Since I had never been to East Germany, I figured if the promoter was willing to cover the expenses of a struggling student runner, why not go for it.

I would have to cross the Berlin Wall and compete at the Olympic stadium in East Berlin. America did not recognize East Germany as a legitimate country at the time. It was considered a Russian puppet state, and the U.S. maintained no diplomatic relations with the East Germans. Once I crossed to the other side of the wall, I would be on my own.

On the afternoon of the meet, I entered East Berlin at Checkpoint Charlie. It was an evening event, and I was scheduled to compete in the high hurdles against an East German who was world ranked. The East Germans had built up the competition as a grudge match between our two countries, and had made it a point of honor for their national pride.

The 100-meter dash was about to begin when my agent brought over an American who wanted to talk to me. He said he was with the U.S. Embassy in West Germany, and told me in the strongest of terms that it would be completely unacceptable for me to run the high-hurdles race that was soon to start. As a member of the American team, he argued, I was a representative of my government. Since America did not recognize East Germany, I would be giving tacit acknowledgment to a country that the United States regarded as illegitimate. He implied that by competing I could start an international incident, and if I had any patriotism, I would get my gear and head back across the border to West Berlin immediately.

What a dilemma for a twenty-one-year-old who was simply enjoying the opportunity to travel, and who had no real understanding of the international consequences supposedly at stake. I wanted to compete, but I certainly wasn’t going to go against the wishes of my country.

As the announcement was being made that I would not race, I headed for the locker rooms, located at the other end of the stadium, diagonally across the infield. Thousands of people in the stadium stood up and whistled loudly, which was their way of booing. I learned later that the announcer had told the crowd the American was afraid to compete against the East German. I was angry and disappointed, but I had enough common sense to change my clothes and get back across the border.

Many years later I would look back on this controversy as my first political act. I guess the possibility of starting an international incident qualifies as a baptism in politics.

Thirty-four years have gone by since the tearing down of the Berlin Wall, and we no longer fear one super power. Instead, there are brush fires worldwide that have overwhelmed America’s resources. Let’s hope in the future, we will continue to argue about tearing down walls and not about destroying countries.

More in this category: « Twins could trade Escobar regardless of standings How the Timberwolves can get Jimmy Butler and a center in the NBA Draft »
back to top