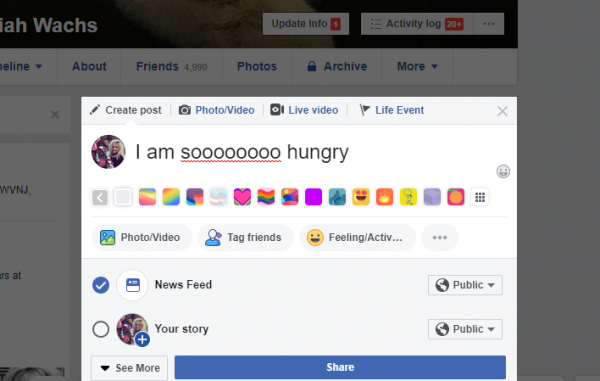 For years we’ve been hearing stories of children being diagnosed with brain tumors or liver disorders based on followers viewing their picture on social media and alerting parents to suspicious findings.  Now a study, published in PLOS One, finds 21 different medical conditions to be revealed based on the vocabulary people use when posting on their timeline.

For Sexually Transmitted Illnesses, there were many expletives as well as the terms cry, scream, away, guess, wow and babe

For Drug Abuse, there were many expletives as well as well as the terms nobody, everybody, stop, call, text and bored

SOME OF THE FACEBOOK DATA THAT WAS FOUND TO BE MORE PREDICTIVE THAN DEMOGRAPHIC DATA SEEMED INTUITIVE. FOR EXAMPLE, “DRINK” AND “BOTTLE” WERE SHOWN TO BE MORE PREDICTIVE OF ALCOHOL ABUSE. HOWEVER, OTHERS WEREN’T AS EASY. FOR EXAMPLE, THE PEOPLE THAT MOST OFTEN MENTIONED RELIGIOUS LANGUAGE LIKE “GOD” OR “PRAY” IN THEIR POSTS WERE 15 TIMES MORE LIKELY TO HAVE DIABETES THAN THOSE WHO USED THESE TERMS THE LEAST. ADDITIONALLY, WORDS EXPRESSING HOSTILITY—LIKE “DUMB” AND SOME EXPLETIVES— SERVED AS INDICATORS OF DRUG ABUSE AND PSYCHOSES.

“OUR DIGITAL LANGUAGE CAPTURES POWERFUL ASPECTS OF OUR LIVES THAT ARE LIKELY QUITE DIFFERENT FROM WHAT IS CAPTURED THROUGH TRADITIONAL MEDICAL DATA,” SAID THE STUDY’S SENIOR AUTHOR ANDREW SCHWARTZ, PH.D., A VISITING ASSISTANT PROFESSOR AT PENN IN COMPUTER AND INFORMATION SCIENCE, AND AN ASSISTANT PROFESSOR OF COMPUTER SCIENCE AT STONY BROOK UNIVERSITY. “MANY STUDIES HAVE NOW SHOWN A LINK BETWEEN LANGUAGE PATTERNS AND SPECIFIC DISEASE, SUCH AS LANGUAGE PREDICTIVE OF DEPRESSION OR LANGUAGE THAT GIVES INSIGHTS INTO WHETHER SOMEONE IS LIVING WITH CANCER. HOWEVER, BY LOOKING ACROSS MANY MEDICAL CONDITIONS, WE GET A VIEW OF HOW CONDITIONS RELATE TO EACH OTHER, WHICH CAN ENABLE NEW APPLICATIONS OF AI FOR MEDICINE.”

The concept of using a “digital language” to help identify certain risk factors is nothing new when it comes to mental illness but is virgin territory when we discuss endocrinology conditions such as diabetes.

More research obviously needs to be done, however, this study demonstrates that not only can our physical actions tune a medical provider into our pathology but so can our social media behavior.

More in this category: « Heat illness and heat stroke explained Hepatitis A Outbreak Declared in Clark County, Nevada »
back to top