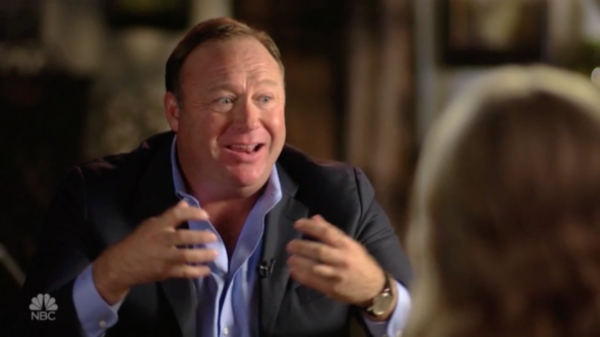 The interview has finally aired. Last week I snarkily wrote about all the speculation of what was going to be said / unsaid in the interview. Alex Jones claimed that Kelly was going to edit the interview to make him look bad. Jones, going so far as to challenge NBC to release the unedited interview (they probably won’t) which led Alex to claim he has a recording of the entire interview and if NBC does not release the full thing -- he will!

To my knowledge, he hasn’t.

Well, anyway, we have now seen the interview.

Well, Jones was partially correct -- the interview does indeed make him look bad. But I certainly wouldn't blame it all on the editing. Mainly I would blame his words and the twenty plus years of Alex Jones footage that Kelly was able to draw upon to support her claims that Alex Jones is a lunatic. Now, she doesn’t come out and call him a lunatic, I’m reading between the lines. But she obviously went after him with every gotcha tactic journalists use these days.

And she didn’t even touch on the Joe Rogen / Alex Jones conversation. The one where Rogen gets Jones high and Alex talks about aliens, extra dimensions, psychic vampires and other random insanity.

Kelly spent the majority of the eighteen minute interview showing footage from Jones’s past rants and  “greatest hits” and not much time showing the actual interview between the two of them. The short snippets we do get from the Kelly / Jones interview mainly involve her acting smug and Jones dodging questions.

Not exactly the stuff of interview legend. The interview apparently tanked in the ratings getting beat out by games shows and reruns of America’s Funniest Home Videos. Jones viewers probably assumed the Kelly piece was going to be all lies and mainstream audiences just didn’t seem to care one way or another.

I guess I don’t know much that will change. Megyn Kelly came off as a dull interviewer and Jones came off as someone who says crazy shit, feigns innocence and seems barely able to control his explosive anger.

If Jones did indeed record the interview and releases the unedited footage I suspect we’ll just get more of the same.

The Alex Jones Show is on GCN.

More in this category: « Paul Ryan Helped Open the Gates to the Wolves! Gentrification is the old gerrymandering »
back to top