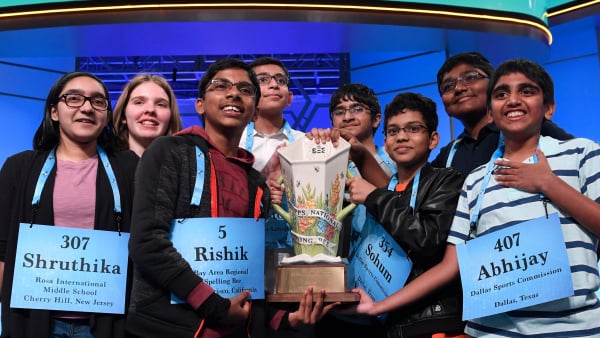 The 92 annual Scripps National Spelling Bee wrapped up Memorial Day weekend. In the previous 92 spelling bees, there have been eight six winners and six two-way ties. This year was something else. After a Thursday evening round that went 5 ½ hours Bee organizers began to feel that there would be a large number of competitors at the top, which led pronouncer Jacques Bailly telling them, "We do have plenty of words remaining on our list. But we will soon run out of words that will possibly challenge you, the most phenomenal collection of super-spellers in the history of this competition."

He was  not wrong. After another three rounds the eight kids at the top never missed a beat and went 24-24. Often times the parents of the competitors seemed rattled and seriously stressed out but for the most part the kids handled the pressure well.

For the first time ever, it was an eight way tie. Normally, the spelling bee champion wins $50 thousand dollars and the trophy. In the past, when there were two way ties, the money was split. This year, instead of splitting the prize money eight ways, bee organizers decided that each of the kids would receive $50 thousand and each will take home a trophy of their own.

As usual at the National Spelling Bee, the kids were largely supporting each other with high fives and hugs when their competitors friends got words correct. Sportsmanship at its very best, it’s actually really lovely to watch. The video linked to the front page is the very final round where they were told, if you get this final word correct - you’ll tie for the top spot as Bee Champion. Their were eight competitors left. All eight of them got their word correct.

One by the one the kids, in this order and the word they had to spell.

Erin Howard, 14, of Huntsville, Ala.: erysipelas.

I don’t get to watch the National Spelling Bee every year but ever since the fantastic 2002 Academy Award nominated documentary Spellbound hit the theaters, I would certainly say the Bee is always on my radar. You should check the documentary out. I believe you can watch it free on YouTube.