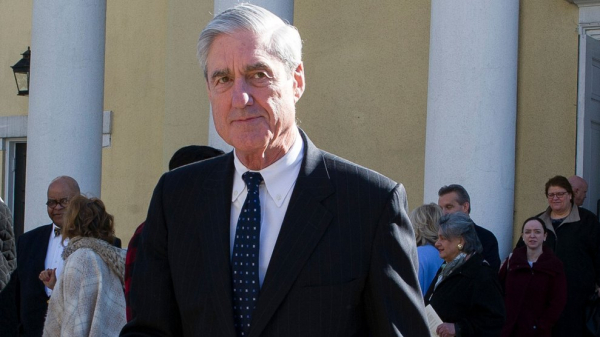 “Mueller? Mueller? Mueller?” Just when I thought Robert Mueller had earned his day off. Anyway, a few weeks ago when his report was released, I almost thought we wouldn’t hear from Mueller again. But now Congress wants unredacted report and wants Mueller to testify because Mueller sent a letter claiming that Barr misrepresented his report. President Trump said, “It should be up to the AG if Mueller testifies,” but then AG Barr said to Congress, “I don’t care if Mueller testifies, ” but then Barr didn’t show up for his second day of testimony, and now Congress wants to hold AG Barr in contempt. But then, the President changed his mind saying Mueller shouldn’t testify. So, now, of course, Mueller will testify before Congress. But then … President Trump invoked Executive Privilege to prevent Congress from seeing the unredacted Mueller report, which will probably delay Mueller's testifying.

How naïve of me to assume this was over and done.

Anyway, I tried to read the entire Mueller report. But I’m only one guy, and it clocks in at 450 pages, and I have other work to get done. I got through about a third of it and mostly skimmed the rest, stopping to fully read a page or two that seemed important or to focus on some of the redacted bits to see if I could figure out what it was redacted (usually - no). Now, I know that “skimming” is not an exact science, but I suspect I’ve read much more of the full report than the vast majority of folks. And so, I tackle the following issues with a reasonable amount of knowledge.

Did the Russians sabotage the election in favor of Trump? The report says “yes.” Did the Trump Campaign meet with the Russians to get said stolen information? The report says “yes.” It’s just that there was no “long term coordination,” for it to be legally considered collusion. The Russians, realizing that a Trump White House would be much more sympathetic to their cause, committed cyber terrorism against the US, then stole a bunch of documents from the DNC,  then gave the stolen information to the Trump Campaign in hopes to help Trump win, and then went on to commit huge amounts of additional interference from outright misinformation campaigns on social media to fraud. The Mueller report literally says there is huge amounts of evidence supporting all those claims, it’s just that there was no long term agreement between the two parties for it to legally constitute collusion.

Wow. That, um - forgive me for saying this but … that does NOT sound like “total exoneration.”

The next thing I noticed is that - not much of the report is redacted. The redacted parts come sometimes in giant black chunks, and sometimes in lots of little snippets. All in all, I would say, of the 450 pages there are about 20 total redacted pages. And certainly not in a row, they are scattered all over. Of course, our two political parties see those 20 pages in a completely different light.

Republicans, “We see the majority of the report and we understand the spirit of what is being said, and so no one has to read the redacted twenty pages - because it won’t change anything. Also, the report clearly says “No collusion. Total exoneration,” so any additional investigation is a waste of time.”

Democrats, “We see the majority of the report and we understand the spirit of what is being said but too much information can be hidden behind twenty redacted pages that might shed more light into an investigation that clearly states Russia sabotaged the 16’ Presidential Election. Also, the report does not say, “total exoneration,” in fact it says the opposite of “no exoneration,” so we would like more information.”

Hrmmmm. Well, they can’t both be right! You know? One side is clearly in the wrong here. Alas, we all know the day and age we live in. Our side is always right. No common ground attempted. The other side is always wrong. Ad nauseam.

Common sense and reason appears to have gone the way of the dodo.

Well, allow me to apply some common sense and reason to this new Mueller … happening. Let Congress read the unredacted report and allow Mueller to testify, because there is no reasonable explanation for blocking Congress from the full report. Members of Congress have security clearance on all matters of national security up to and including investigations that look into - if a hostile foreign power sabotaged a Presidential Election - which the report universally found Russia to have done! That sounds like National Security to me. Which Congress has clearance for. Therefor, common sense and reason suggest Congress should receive the full report.

Fair enough. That is the right of the President (and members of the executive branch) and it’s an important protection. In fact, many modern day Presidents have invoked Executive Privilege, some have done it much more than once, including - Nixon (a few times), Reagan, Bush, Clinton (several times), Bush Jr. (several times), Obama and now Trump.

Of course, it should also be noted that Congress can breach EP but must sue in federal court. It’s happened before, and in two notable cases, Nixon and Clinton, the President lost. Nixon invoked EP to avoid Watergate, Clinton invoked EP to avoid the Lewinsky scandal. Congress sued and won in court. The rest, as they say - is history.

So, this is really nothing new. The cover ups. The investigation. The lying. The testifying. The “I don’t recalls.” The invoking of Executive Privilege. The lawsuit. So people should really stop their fake outrage because we’ve seen this happen over and over.

These new shenanigans are nothing new but will add to the cost of the investigation and the amount of time we have to hear about it. Apparently, the overall cost of the Mueller investigation, so far, is a bit more than $16 million. Maybe that sounds like a lot to you, maybe it doesn’t. For context, the 9/11 Commission was funded with a $15 million budget. I’m sure you folks remember the 9/11 Commission. If not, it was an investigation into how and why the largest terrorist attack on the US occurred, and what can be done to prevent future attacks. Which, is the exact definition of “a matter of National Security.” (I just scanned over the 9/11 report and did not notice a single redacted item, which, I know, is NOT exactly the same thing we have going on today with Mueller report, but was still something I thought was interesting).

Now we have a new report, that is literally looking into a matter of National Security, investigating if a hostile foreign power sabotaged the 16’ Presidential Election. One would think, when applying common sense and reason to this dilemma - the Mueller Report is an important investigation into the National Security of the country.

And if you feel annoyed that the Mueller report cost more than the 9/11 Commission, allow me to remind you that the Clinton Impeachment cost taxpayers more than both investigations combined. To break it down:

Clinton Impeachment - “Did the President lie to Congress while under oath, about weather or not he cheated on his wife?” Cost to taxpayers: $70 million dollars (adjusted for inflation that’s $105 million today).

9/11 Commission: “An investigation into the largest terrorist attack on US soil and, as a matter of National Security, a report on how we can be better equipped to thwart future terrorist attacks.” Cost to taxpayers: $15 million dollars (adjusted for inflation that’s $22.5 million, today)

Mueller Report: “As a matter of National Security, an investigation into if a hostile foreign power sabotaged the 16’ Presidential Election?” Cost to taxpayers: $16 million dollars (but could go up).

If you honestly can’t see which of the above is not like the others, well - then you can’t. But common sense and reason should tell you that two of them are matters of National Security, and one of them is total BS that wasted a lot of taxpayer money.

Republicans used to be the security party, the military party. Even President Obama had a Republican Secretary of Defense. Speaking of Obama, we all know the truth of this next statement, if a two year Special Prosecutor investigation uncovered Russian interference in 2012’s Obama vs. Romney election that involved stolen information from the RNC in a way that handed Obama the win - Republican heads would have exploded from rage induced aneurysms!

I bet then, with that ridiculous Russian/Obama scenario, Republicans would have been very interested in security and in preserving election integrity.

More in this category: « Opinion: The problems with higher education (Hint: work harder) Hurricane season. "Do you feel lucky? Well ... do ya?" »
back to top