Should we panic over Measels? 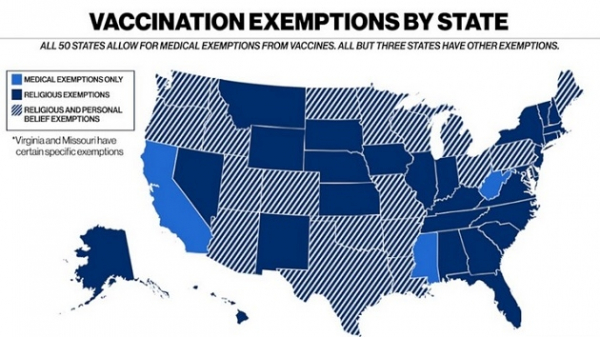 In general, it is not a good idea to panic about anything. The panic itself often causes more harm than the original threat.

Crisis situations, real or contrived, lead to new intrusive laws that the public would never accept otherwise. We supposedly cherish freedom, but if we believe that the world will end if we don’t act NOW, then we may clamor for the government to save us. Cynical politicians bent on increasing their power never let a crisis go to waste.

Something like the Green New Deal—the end of our comfortable, prosperous lifestyle—takes a truly apocalyptic threat. But to eliminate our freedom to decline a medical treatment, the threat that “millions will die” of measles is evidently enough. Or if not millions (most older people had measles and recovered fully), a few especially vulnerable children, who can’t be vaccinated themselves, might catch measles and die.

There are several hundred cases of measles nationwide, more than in 2014, and bills are being pushed through state legislatures to eliminate all but very narrow exemptions to the 60 shots now mandated for school attendance.

In New York City, people are receiving summonses based on Mayor Bill de Blasio’s emergency order. Everybody, adult or child, who lives in four ZIP code areas must get an MMR shot or prove immunity, or face the prospect of a $1,000 fine ($2,000 if you don’t appear as ordered). Your religious exemption is overridden. The threat of 6 months in prison and the prospect of forcible vaccination were removed before a hearing on a lawsuit brought by five mothers. The judge dismissed the case.

Health Commissioner Oxiris Barbot said that the purpose of the fines is not to punish but to encourage more people to proclaim the message that vaccines are safe and effective. Get it? If you say something to avoid a fine, that makes it true.

It’s about the need for herd immunity, they say. We need a 95 percent vaccination rate for herd immunity to measles. With only 91 percent or so we are having outbreaks! If we could just vaccinate another 4 or 5 percent!

Mayor De Blasio has a point about vaccinating everyone. Adults are getting measles because their shots have worn off. It is likely that we have survived for decades with a large part of the adult population vaccinated—but not immune. So where do the mandates stop?

Outbreaks have occurred in populations with a near-100 percent vaccination rate. Was it vaccine failure? Or was the vaccine not refrigerated properly? Or was a claimed outbreak real? One in Ann Arbor, Michigan, was called off when a special test, a reverse transcriptase polymerase chain reaction (RT-PCR) showed a vaccine-strain measles virus rather than a wild-strain measles virus. Some 5 percent of vaccinees may get an illness that looks like measles, but it is just a “vaccine reaction.” Can they shed live virus? Yes. Should you keep your immunocompromised child away from recently vaccinated people? Just asking.

Like all medical treatments, vaccines are neither 100 percent effective, nor 100 percent safe. Read the FDA-required, FDA-approved package inserts. Arizona defeated a law that would have required making these available to parents in obtaining informed consent. (You can get them on the internet.) Vaccine Court has paid out about $4 billion in damages—recently for two children with severe brain damage from encephalopathy (that’s brain inflammation) after a fight lasting about 15 years. Just incidentally, they had an autism diagnosis also. Parents bring their severely injured children to hearings. You won’t see these children on tv, only pictures of babies with measles. No “fear-mongering” allowed about “rare,” possibly coincidental problems from vaccines.

There are trade-offs with vaccines: risks and benefits. But in the panic about measles, the right to give or withhold informed consent—fundamental in medical ethics as well as U.S. and international law—is being sacrificed. And so is free speech. The AMA wants to censor “anti-vaccine” information on social media. I happened on a factual article by investigative reporter Sharyl Attkisson, but was not able to retweet it because it had been removed.

The threat of infectious diseases is real and increasing. We need more robust public health measures, better vaccines, and improved public knowledge and awareness. Deploying vaccine police and shutting down debate will erode trust in health authorities and physicians, although more people may get their shots. But such heavy-handed measures will not defeat the enemy—measles and worse diseases.

Jane M. Orient, M.D. obtained her undergraduate degrees in chemistry and mathematics from the University of Arizona in Tucson, and her M.D. from Columbia University College of Physicians and Surgeons in 1974. Her views and opinions, if expressed, are her own and do not necessarily reflect the opinions of GCN.  Her column can often be found at www.pennypressnv.com. Her column has been reprinted in full, with permission.

Last modified on Wednesday, 08 May 2019 21:47
Tweet
Published in Health
Tagged under

More in this category: « Data gathering during a patient encounter made easy Parkinson risk tied to appendix removal »
back to top