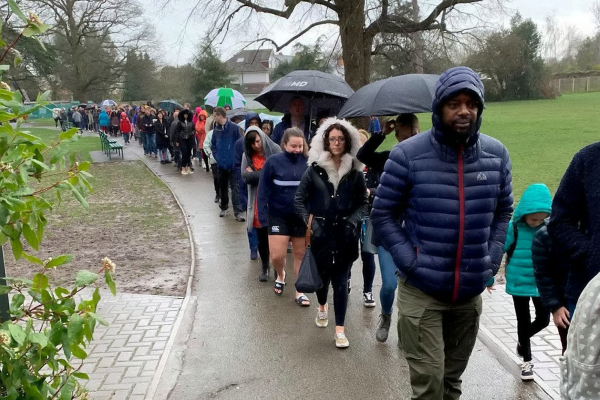 Last month in the United Kingdom, more than 5,000 people stood in line in the rain - for hours, to see if they were a potential stem cell match for a young boy battling cancer. You see, back in December 2018, 5 year old Oscar Saxelby-Lee had been diagnosed with “acute lymphoblastic leukaemia” when the family took him to Birmingham Children’s Hospital over Christmas. Oscar was just feeling, “unwell.” The family was certainly not expecting to hear that Oscar had leukemia.

But he did. And it was a particularly rare and aggressive kind of cancer, too. Only a few hundred people, in the UK (where all of this took place) per year are afflicted.  Oscar underwent four weeks of successful chemotherapy but then the doctors said he would need a stem cell transplant within a few months.

Oscar's community and school reached out via social media and told the UK about Oscar and his cause. Tens of thousands of people reached out to help including the aforementioned 5,000 that stood in the rain. Usually in these circumstances, a family member would donate stem cells but neither of the parents were a close match. Thankfully, three people, out of several thousand - were found to be a perfect match for Oscar.

From the Hand in Hand for Oscar Facebook page:

"We have the best news to share! Oscar has a match!!!! Absolutely thrilled to announce Oscar has finally got a stem cell match, not just one but three and will be undergoing transplant very soon!! What an emotional rollercoaster it's literally been a journey of heartache and dread continuously, but...WOW!!!  What a feeling of relief and positivity to help Oscar kick cancer's butt!! It's been so so traumatic but we are over the moon with being given a chance to tackle the next step in treatment. Thank you, thank you, thank you, from the bottom of our hearts to all of you out there who have registered, supported and continued to spread the word for our beautiful boy and those in need of wonderous bone marrow cells. We could never have done this without you all!!”

Before the transplant could happen, Oscar needed four days of radiotherapy, which he received, and last week - Oscar was found to be free of leukaemia blast cells. The stem cell transplant is the only thing left.

I’ll update more on Oscar as soon as I hear.

More in this category: « “Shell On,” the latest teen challenge, involves eating plastic Data gathering during a patient encounter made easy »
back to top