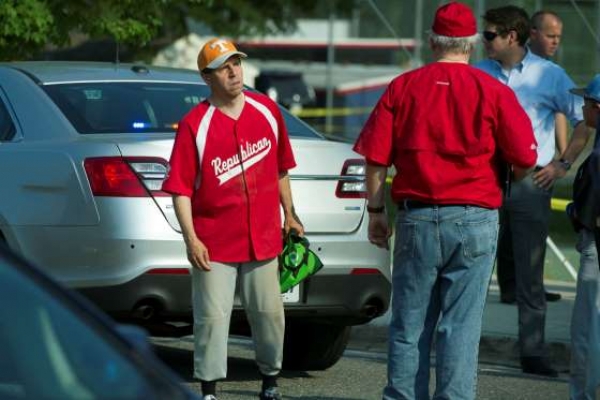 Five people were injured when a gunman opened fire on lawmakers practicing for an annual congressional baseball game. The gunman was killed in a shootout with police.

The shooting took place at about 7:00am at a park in Arlington, VA, during practice for the annual event that pits Republicans against Democrats in a baseball game that raises money for local (Washington D.C.) nonprofits. The gunman has been identified as James T. Hodgkinson, a previous volunteer for Sen Bernie Sanders’ presidential campaign. Hearing this news, Sen. Sanders immediately issued a statement: “Let me be as clear as I can be. Violence of any kind is unacceptable in our society and I condemn this action in the strongest possible terms.”

A profile for Hodgman began to emerge -- a Facebook page believed to be Hodgkinson’s includes a lot of damning rhetoric against President Trump, including posts like, “Trump is a Traitor. Trump Has Destroyed Our Democracy. It’s Time to Destroy Trump & Co.”

Who was injured during the attack?

First of all, thankfully, Hodgkinson was a terrible shot and no one was fatally wounded in the shooting. Secondly, police were close enough to get to the event before Hodgkinson was able to get closer to the victims.

House Majority Whip Steve Scalise, shot in the hip, is in stable condition after undergoing surgery. Zachary Barth, a staffer for Rep. Roger Williams (R-Texas) and two police officers were injured and are all in stable condition.

Mike Mika, a lobbyist for Tyson Foods, was also shot -- the company released a statement saying, “Mr. Mika has been taken to a local hospital and we’re awaiting word on his condition.”

Sen. Rand Paul, who was at the practice, describes the scene as it unfolded, “After the gunman fired 50 or 60 shots, hitting Scalise and others … Everybody probably would’ve died except for the fact that the Capitol Hill Police were there, and the only reason they were there is because we had a member of leadership on our team … If Scalise wouldn’t have been on the team — unfortunately he was hit and I hope he does well — but also by him being there it probably saved everyone else’s life, because if you don’t have a leadership person there, it would’ve been no security there … (and) … if the shooter’s got several hundred bullets, and we had no weapons, and no place to hide ... he would’ve advanced on the rest of us, there would’ve been no chance. The only chance we had was that the shots were returned by the Capitol Hill Police.”

More in this category: « Opinion: Sessions not a Republican if he wants to end states’ rights to legal marijuana World Blood Donor Day: Saving Lives One Drop at a Time »
back to top