The 10 Plagues: Bible and science mesh 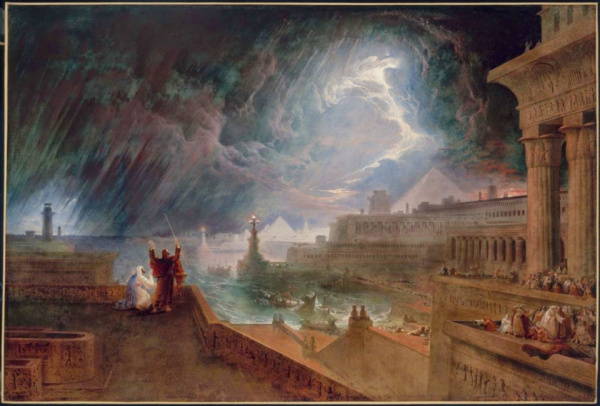 On Passover, we read from the Book of Exodus in the Torah explaining the Hebrew’s years of enslavement and the struggle it took to free them.  G-d sent Moses to ask Egyptian Pharaoh Ramses II to “Let my people go.”  When the Pharaoh refused, the Lord sent down 10 plagues:

Scholars have debated how these occurred and scientists have interestingly found scientific explanations for each. This is what they found:

The water of the Nile turned to “blood”.  It was undrinkable.  One theory is the red clay could have been washed into the river and tributaries, or “Red Tide”, an algae bloom of Oscillatoria rubescens, for example, turned the water red.  Moreover the algae can release toxins that kill nearby fish.  Once the water is unlivable……

Frogs swarmed into the towns and homes.  One theory suggests that since frogs like to live near the water, the toxicity and smell caused them to move from the waterways to the towns.  The quantity of frogs still needs an explanation but how many of us see one spider in our house and claim the whole residence is “infested”……

Infestations occurred as the next plague and could be explained by the above two.  The frogs eat insects and keep the populations in control when they hang out by the marshes and rivers.  The drought and unlivable water conditions cause the frogs to leave and eventually die, so insects go unchecked.

Swarms of flies encompassed the fourth plague.  Scientists explain this from the lack of competing insects and frogs not around to eat them.  They, in turn, fed on the dead frogs.

One would think the Pharaoh would have given in by now but he didn’t.  The fifth plague caused death of Egyptian livestock.  Insects carry disease and swarms of them could have caused the livestock to become diseased. Moreover, water sources were becoming scarce as well.

Egyptians became infected with boils on their skin.  Insects carry disease, lack of clean water and food could make one susceptible and pathogens can enter into societies and cause epidemics.   One theory suggested a smallpox outbreak occurred.  Researchers found small pox scars on recovered mummies and postulated that 3000 years ago an epidemic could have occurred.

The plague of hail and fire must have been a scary one.  Many have postulated that hail and fire raining from the sky could have occurred from a nearby volcano.  If that’s the case why not make “volcano” the plague.  But interestingly, 3500 years ago the Santorini volcano north of Crete in the Aegean Sea, erupted.  And for those of us who saw Dante’s Peak, there was ash falling everywhere.

IMAGE FROM THE BOSTON GLOBE

Locusts swarmed the landscape.  If a volcano was nearby, I’d head south too.

The ninth plague was darkness. Without light, temperatures drop, work can’t be done, crops won’t grow.  Scientists suggest this could have occurred from an eclipse, dust storm, or the plume of smoke from the volcano.

Death of the first-born

The tenth and final plague was the death of every Egyptian first-born.  Scientists have some difficulty explaining this one except for many first born were out the fields helping the adults when the pestilence, boils, etc. ensued.  Another theory suggests the grain stores became contaminated and the first born might have had first pick of the grain, becoming sick first.

The Bible is rich with history and lessons and such a work needs no explaining.  But there are those who like to mesh science with the Bible.  So for all of us celebrating our ancestor’s exodus and freedom from slavery, Happy Passover.