Game of Thrones: The final season. 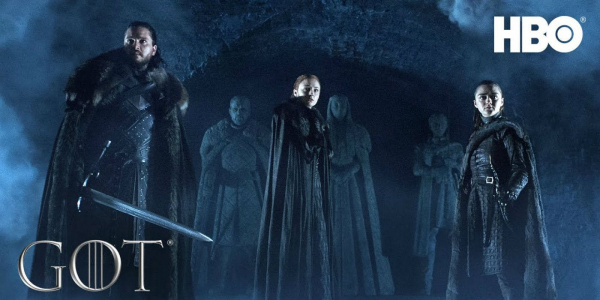 In less than a week, the final season of Game of Thrones begins. After five novels over the course of 23 years, two pilot episodes and seven seasons of the widely popular HBO TV show are finally about to see the end of winter. At least the end of winter for the TV show. And I’m okay with that. I’m not really a super fan of the show. I mean, I like the show. And I love the first three novels in the series, a lot. But books 4 and 5 were, um … long. Much, much too long.

Thankfully, the HBO series ditched a bunch of the meandering nonsense that happened in books 4 & 5 of George R.R. Martin’s beloved fantasy series. Even though that’s true, the farther the series strays from the source material, the less successful it is. And by “less successful” I’m not saying that audiences stopped watching it. No, not that at all. The most recent estimated audience for GoT is, “approx. 30 million people per episode” watch the show. So, it’s more popular than ever. I just think it’s inconsistently “good,” while occasionally being shockingly mediocre. Half the actors are perfectly cast and are considerably good in their roles, the other half of the actors are … um … okay (and sometimes they’re not.)

All that being said, Game of Thrones has certainly been a culture phenomenon far surpassing expectations for the HBO series. I would even go so far as to suggest that Game of Thrones pretty much is HBO. I have no doubt that HBO execs are ever on the lookout for the next GoT. Especially with something like five prequels/sequels in the works.

For those that are familiar with the show but have not read the novels, here is an oft repeated note that Martin’s readers all suspect - George R.R. Martin will probably die before he finishes writing the books. You see, the books are all massive, and it now takes him several years to finish one. Check out this list of publishing dates from most previous novel to the first one:

You can see the time increase between publishing dates as Martin’s world and novels expand. George RR Martin is 70 years old, he’s a big man and he’s not terribly healthy. He still claims that Book Six: The Winds of Winter, isn’t really close to being done - and after that one is finished he still has a final book to write. Which, if his usual pattern continues, means that Book Seven: A Dream of Spring might be out sometime around 2030. And that’s probably not an exaggeration. I drink to Martin’s health and longevity, often. =)

I met Martin a few times back in 1999-2000, and I was able to tell him a cute story. And, boy did I not realize how accurate this story would turn out to be (a story I am about to tell you). You see, I used to work in a bookstore back in 1996, the year Game of Thrones hit the bookshelves. It was an odd looking silver foil cover with no art, it just read, “Game of Thrones. George RR Martin.”

I knew of Martin as I had devoured all of his 80’s series called, “Wildcards.” So, Game of Thrones was on my list, I just hadn’t gotten to it. And so, I’m at work one day and an old gentleman walks up to the counter. He appears to be in his eighties. I saw him the moment he walked in because he was moving very carefully. I didn’t think his movement was only because of his age, in fact - he looked as if either leg joint was injured and/or he was very ill. Or both. Hence the slow movement. So, he comes in, he walks to the Sci-Fi section, grabs the silver hardcover GoT, brings it to the counter and says, “I just finished this and, it’s the greatest fantasy novel I’ve ever read. Do you know when the next one is coming out?”

I say, “Oh, cool, you’re the first person to give me any kind of feedback about this book. I’m glad to hear it’s good because I like Martin’s other work.” Then I look up the exact publishing date of GoT, which was only the previous month. I say to him, “You know what? It looks like the hardcover was just released last month, so we’re probably not looking at a sequel for - at least a year or two.”

And this man, again, in his eighties, matter of factly says to me, “Yeah. I thought you were going to say that. I don’t think I’m gonna make it that long.”

And then he puts the book down on the counter and leaves the store. That day, I 100%, bought a copy of Game of Thrones!

Back to the show, the GoT showrunners were given the general idea for the ending to all the storylines from Martin himself. So, as the series outpaced the novels the TV show was generally able to follow Martin’s plot. But, not really. The TV show has just transformed into something entirely different from the original novels. Characters arcs and entire storylines have been cut, or vastly changed. Some characters who are still alive in the books are now dead in the show, or vice versa. There really is no longer any comparison. A few years ago, Martin himself joked that the TV series has become more “fan fiction” than adaptation. And, as much as I love about HBO’s Game of Thrones, I kind of agree with that statement - too often the show plays out like overly melodramatic fan fiction.

But, despite its flaws, GoT is still the greatest fantasy we’ve ever had on TV. So, at least there’s that. And beginning on April 14th, 2019 -  I, along with 30 million other of my closest friends will tune in to watch every single second of Season Eight of Game of Thrones. And sometime in the future I’ll probably watch every episode again.

More in this category: « Lizzy (the OwlKitty) stars in all your favorite movies and TV shows Star Wars Episode IX: The Rise of Skywalker, official trailer »
back to top