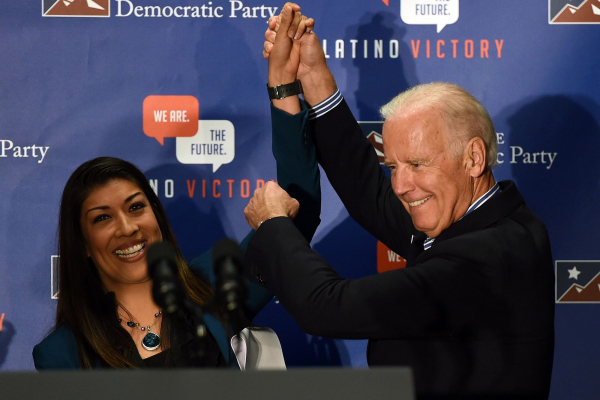 After a weekend full of Lucy Flores, the time has come to ask why the former gang banger, Nevada Assemblywoman and two time Nevada political loser found it necessary to wait four and a half years and then come after Joe Biden for alleged hair sniffing.  Or alleged back of head kissing. Or alleged shoulder holding.

All while Biden, then the Vice President of the United States of America, was lending his support to what would soon become her massive loss in 2014 for Light Gov.

And, did I mention that it was four and a half years before she trotted out Biden’s “crime?”

“I had never experienced anything so blatantly inappropriate and unnerving before,” she (or someone) wrote in New York Magazine.

You mean the abortion you had when you were gang banging at age 16 was perfectly appropriate?  The fact that your solution to becoming pregnant was to kill the baby?  That was appropriate?

Or does it mean you have a very short memory?

Now, Lucy.  I’m NOT kicking you when you are down.  In fact, the exit you made from that life is impressive.  It shows that President Trump is on the right path with his criminal justice reform efforts—which, thankfully, your Democrat buddies seem to be supporting.

Also, I’m not here to make Joe an example of who I would like to see as President, since we already have a perfectly good President in Donald Trump.

But, he is, at least, the sanest of the Democratic candidates so far and is a decent man who doesn’t deserve the negative publicity you and the lamestream media have whipped up, presumably at the request of one of the other crazed Democrat candidates.  Further, you seem just a tad too concerned with your political relevance which is actually somewhere between that of Jussie Smollett and Hillary Clinton.

And as far as this #MeToo crap goes, count me out.

As I have said in this space before, my Father took me aside when I was about 13 and told me that I had a Mother and two Sisters and I had better treat women the way I expected others to treat my Mother and two Sisters.  Left unsaid was what would happen if I violated those strictures but it wouldn’t have been pleasant.

Somehow, given your gang banging background, if you had been all that offended at the time, Biden might have suffered a groin injury (although the Secret Service might have been upset).  Something tells me you didn’t say a word at the time because you are full of crap.

You appreciated his trip to attempt to bail you out of a horrible campaign back then and you feel like there’s nothing he can do for you today.

In short, madam, cut the crap.

You don’t deserve any of the time the lamestream media has wasted on you and, if you want to be an example to troubled youth, maybe you should endorse the President’s First Step Act and get on with it.

Or you can continue to act like Jussie Smollett and become even more irrelevant than you are now.

More in this category: « Opinion: Sweet home Chicago? Live in or grow up in Illinois and you'll understand Opinion: If you believe the Swamp Class in Washington, you're more crazy than they are »
back to top